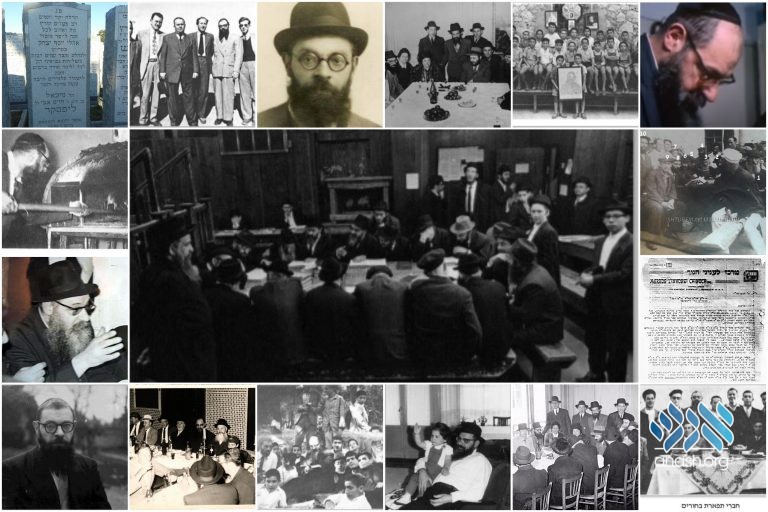 5 Iyar is the yahrtzeit of Reb Michoel Lipsker, who was sent to Morocco by two Rebbeim and revolutionized Yiddishkeit in that country.

5 Iyar is the yahrtzeit of Reb Michoel Lipsker, the first shliach sent to Morocco in 5710/1950, and the man who merited to be sent on shlichus by two Rebbeim.

Born in Poltava in 5667/1907, his father Reb Chaim Tzvi was the rov of the Soldatska shul in Poltava. Reb Michoel describes his father as a wonderful man who was boki in Shas like in Ashrei.

The revolution period in Russia (5677/1917-5680/1920) was terrifying for the Lipskiers in Poltava. Cities were changing hands all the time and the victims were always the Jews, no matter which side had the upper hand. Reb Michoel in his memoirs writes how his mother’s chochmah saved them one night from a raid by a group of soldiers who had entered the city. She told them that residents of the house had typhus, and thus scared them off and saved her family.

In 5682-3/1922-3, Michoel joined the Lubavitcher Yeshiva at Kremenchuk and excelled at his studies. After two zmanim there it was off to Oshtashkov, where a group of twelve bochurim studied under Reb Avrohom Elya Plotkin. After a successful year there, Nevel was the next stop. These and other stops in the underground yeshiva are what formed his personality – one of mesiras nefesh for Yiddishkeit and hiskashrus to the Rabbeyim.

Reb Michoel was one of the active members of anash during the really dark days of the Soviet Union. In Leningrad, one of his main activities for the klal was working with his brother-in-law Reb Boruch Shifrin and bringing many Jews to kever Yisroel.

For a time, he also served as a mashgiach in the Yeshiva in Kutaisi, Georgia.

In 5706/1946, Reb Michoel and his family managed to escape with the mass exodus of chassidim, and they arrived in Paris. When the Rebbe visited Paris in the spring of 5707/1947, Reb Michoel merited to accompany the Rebbe (See photo below.)

At that time, Reb Michoel had been traveling around Paris and France collecting money for the Yeshiva and the cheder in Brunoy. Reb Michoel began working on getting a visa to Morroco, but he was having issues. Despite the difficulties, he continued traveling across France to raise money for the yeshiva. One such trip to coastal Nice is what got him his needed visa.

While in Nice, he told acquaintances about his difficulty in arranging a visa. His host heard him mention Morocco, and so he rummaged through his desk drawer until he found a business card with the picture of a man from Morocco who had recently visited him. That man was the son of Rav Refoel Baruch Toledano, rov of Meknes, Morroco. Reb Michoel’s trip to Nice ended right then and there. He traveled back to Paris and got in touch with Rav Toledano who invited him to Meknes, thus enabling him to get his desired visa.

It wasn’t long – the end of Iyar, 5710 – and Reb Michoel was hard at work. At first alone, and after a while, he traveled back to Paris and brought his family over. While back in Paris, Rabbi Binyomin Gorodetzki, head of the Europen “Lishkah,” traveled to Morocco to lay some of the groundwork and see what would be necessary for Reb Michoel to succeed.

It is always difficult to make changes to an age-old system. Here, the rabbonim were especially wary of an outsider suggesting changes to their tradition – such as how to teach Torah in yeshivos and Jewish schooling for girls. But it didn’t take long for his pure intentions to become clear.

Another challenge was the more modern Jews who wanted to voice their opinions, particularly concerning education. In the Sefardic community, there was no Conservative and Reform, and everyone belonged to the same community. With time, Reb Michoel learned how to deal with them.

At that time, the secular “Alliance” schools, armed with endless funds, had set up shop in various Sephardic lands – Morroco, Tunisia, and Algeria – raising many traditional children to be completely secular. Yet, Reb Michoel raised generations of yerei shomayim without giving in on his chassidishe principles. He attracted hundreds of students to his chadorim where boys and girls learned separately and where they did not even study Limudei Chol!

For the next 19 years, Reb Michoel raised a generation of rabbonim, shochtim, sofrim, and simply frum baaleibatim.

Much can be written about the general infusion of life into the Jews of Morocco by R’ Michoel, including a revolution in the use of teffilin, mezuzos, and sifrei Torah. Years of isolation and poverty had brought about a lack of kosher STaM and tzitizis, and Reb Michoel brought in huge amounts of material to produce all that locally and raised a generation of young men who could write STaM.

More could be said about his accomplishments in regards to the chinuch of women and girls. Many young girls received their first Jewish education from R’ Michoel’s school and later went on to schools and seminaries in Europe and elsewhere.

The concept of learning during summer vacation had not existed until Reb Michoel introduced it. The extended break from learning was destructive for the children and disruptive for their parents. A special summer learning schedule was introduced, with great success.

Tiferes Bachurim was a program initiated by Reb Michoel designed for working men and boys, much like a similarly named program by the Frierdiker Rebbe in Europe. It organized for them shiurim in nigleh and Chassidus with great success. These young men were also recruited to help with many of the programs that were organized.

Whereas certain other groups who came to Morocco looked to attract the wealthier families, Reb Michoel never turned down a boy or girl no matter how poor. Sometime after R’ Michoel’s arrival, word came to the centers in France that “Chabad will soon take over all of Morocco.” While others tried to compete, they didn’t hold out long.

Despite R’ Michoel’s “official office” being in Meknes, the “Yerushalayim of Morocco,” many of his best students who went on to yeshivos in Europe and Eretz Yisroel were children of poor and simple families from villages across the country.

Any visitor to Morocco throughout that time period had no choice but to encounter the work of Rabbi Lipskier. Of note is a 1961 documentary by the Joint Distribution Committee that shows him hard at work teaching young men how to write and put together tefillin.

In 5729/1969, when Meknes underwent a large exodus of Jews to Eretz Yisroel and France, Reb Michoel returned to New York. The majority of remaining Jews were now in Casablanca and in the hands of the shluchim – Reb Shlomo Matusov, Reb Sholom Eidelman, and Reb Leibel Raskin.

In Crown Heights, he became an active member of anash, including giving daily shiurim in 770. Not wanting to make a living from a Torah position, he took a job as the kitchen manager of the 770 yeshiva – chassidishe bittul to its fullest!

In his memoirs, written in 5741/1981, Reb Michoel writes about how he came to carry out many mivtzoyim before they were launched:

Mivtza Chinuch: Where would we begin? Almost everything we did was in the realm of Chinuch!
Mivtza Tefillin: Teaching a generation f young men how to write nice, kosher tefillin. Importing tons of parshiyos, retzuos, and batim to produce beautiful, kosher tefillin for all. Educating the people about the proper placement of tefillin, etc.
Mivtza Tzedaka: Both on the giving and receiving end. That even the very poor are required to share what they have.
Mivtza Taharas HaMishpacha: The fixes that Reb Michoel – and later other shluchim in Morocco – made in the realm of mikva’os were extensive. In short, a revolution was made to bring the standards there up to where they should be.
Mivtza Matzo: Reb Michoel began baking matzoh there in 5712/1952. The system there was quite old-fashioned, with all grinding and baking done by hand, but there was much room for improvement. He began by dismantling all the mills, cleaning out any residue, changing parts, and basically starting from fresh. The result was mehudar matzos, second to none. The rabbonim there were astounded by what they saw but accepted these changes after seeing how it was much mehudar. The change implemented was now the new standard.
Mivtza Tzitzis: Seeing that most of the tzitzis in Morocco were likely pasul, Reb Michoel taught a generation of women how to wave kosher tzitzis and arranged with a small factory to produce Talleisim and Talleisim k’tanim for them.

It is interesting to note that Reb Michoel became a part of the Moroccan Jewish “fabric” by making a shidduch with the renowned Abuchatzeira family. His son, Hirshel, zol gezunt zein, married Chana (Annette) nee’ Tordjman, may she live and be well, Baba Sali’s granddaughter.

Also, his daughter Sarah married Rav Ezriel Chaikin, may they live and be well, who for several years from 5715/1955 was the shliach in Agadir, Morocco, until he was banished by the authorities for “spreading Zionism.”