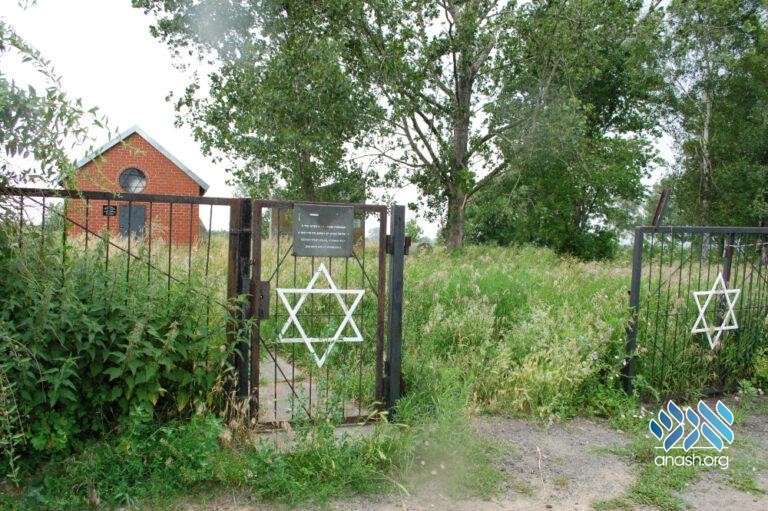 Jewish cemetery in Sochaczew, with the restored, red-brick ohel in background.
Photo: By Wistula via Wikimedia Commons

Motzei Shabbos Story: When the son-in-law of the Kotzker Rebbe fell deathly ill, his father-in-law responded with a cryptic statement. Decades later, it was used to explain a passage from Gemara.

Rabbi Tarfon’s mother was walking in the yard on Shabbat and her sandal tore. Rabbi Tarfon placed his hands under her feet until she returned home.

Sometime later, Rabbi Tarfon fell ill and his colleagues came to visit. His mother asked them to pray for her son, mentioning that he was exceedingly careful with honoring her. The sages asked, “How so?” and she recounted the episode.

“Even if he’d do thousands of times more than that, he would not have reached half of his Torah obligation,” they responded.

Rabbi Avraham Borenstein of Sochaczew (1838-1910), son-in-law of the famed Rebbe of Kotzk, was known for his Talmudic commentary and responsa, as well as for his erudite lectures that drew large crowds to his yeshiva.

His lectures typically flowed freely, but on one occasion when teaching the passage about Rabbi Tarfon, he paused and sank deep into thought. After a few moments, he looked up, having clearly experienced an ‘aha’ moment.

Those present were intrigued and did not have to wait too long for an explanation.

Reb Avraham began by questioning the story. “How can such a thing be?” he asked. “A mother who is worried about her ill son turns to the sages with a request for prayer and recounts his merits. But not only do the sages not accept the praise, they outright reject it! Why would they disregard the mother’s words and the remarkable actions of her son?”

His enthusiasm grew and he began to sway back and forth. “Listen to the following story that happened to me,” he continued.

“When I was newly married and living with my in-laws in Kotzk, I fell ill to the point of no return. The family sent word to my father in Biala that he should come immediately.

“My father, of course, dropped everything and traveled to visit me. He was appalled to learn

that my father-in-law, the Kotzker Rebbe, appeared impervious to my illness and had not visited even once. The conduct of my father-in-law, who was my father’s own Rebbe, bewildered and saddened him. He summoned up the courage and entered the Rebbe’s study and cried: ‘Rebbe! I gave you my dear son for your daughter, trusting that you would take care of him. Now I hear that you have not even visited him! Do you know that my son learns Torah 20 hours a day?”

“My father-in-law, the Rebbe, heard what my father said and retorted, ‘You call that learning?!’

“My father knew he was standing in the presence of a holy man and left the room broken-hearted. He did not breathe a word of the encounter to anyone.

“A few days later my condition improved, much faster than anticipated. After I fully recovered, my father told me about the odd exchange he had had with my father-in-law.

“For 40 years this episode has lived in my memory, and much as I tried I could not understand my father-in-law’s actions. How could it be? I was deathly ill. My father requested that his Rebbe pray for me, mentioning the merits of my assiduous study schedule, about which it is said,2 “For with me shall your days increase, and they will add to you years of life.” And here, when I was in deep need of increased days, my father-in-law completely disregarded my impressive study schedule!

“Now, learning the story of Rabbi Tarfon and the reaction of the sages to his mother’s request, I have finally gained some clarity.

“Every soul is sent into this world with something to rectify. If they do not fulfill that mission, they are sent back as a reincarnation until the goal is reached.

“How can a person know what he or she is here to fix? When we see that a person is attracted to a particular mitzvah and fulfills it with zeal, we can assume that this is their mission.

“When Rabbi Tafon’s mother began praising her son’s diligence in honoring her, the sages understood that this mitzvah was the purpose of his life here on earth. They feared that maybe he had achieved his goal and thus his time to return to his Maker had arrived. They therefore told his mother that he had not yet fulfilled a fraction of his obligation, thereby effectively granting him more years to live.

“Likewise, when my father told the Rebbe of Kotzk about my study schedule, the Rebbe understood that Torah study is my main purpose in life, and perhaps because of my great study schedule I had already completed my mission and my time had come. My father-in-law therefore discounted the merit, asking, ‘You call this learning?!’

“With those few short words he made it clear that my time had not yet come and my recovery was imminent.”