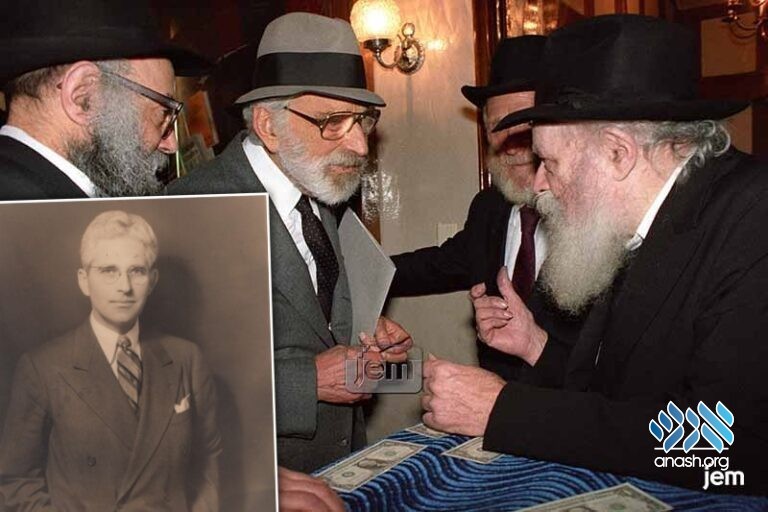 Mr. Julius Stulman was a successful entrepreneur who signed the affidavit allowing the Frierdiker Rebbe to immigrate to the United States. His son, Mr. Stephen Stulman tells of the close relationship his father had with the Rebbe and Frierdiker Rebbe.

Mr. Stephen Stulman is a retired businessman and active philanthropist. He resides in Manhattan and was interviewed in the My Encounter studio in April of 2014.

In 1939, during the Nazi invasion of Poland, the Previous Lubavitcher Rebbe was living in Warsaw, and once they occupied the city, he was trapped. After high-level political and diplomatic efforts, the US State Department enlisted the help of Germany’s Abwehr military intelligence service — the United States hadn’t yet entered the war — to smuggle the Rebbe out from under the eyes of the Nazi SS.

But the US was reluctant to let the Rebbe into the country without proof he could support himself or that he had a sponsor to vouch for his financial independence. Today, you could walk down the street and grab ten people who would sponsor the Rebbe. But we’re talking about 1939. People didn’t have money, and even fewer people were ready to stick their necks out and take on that kind of financial responsibility. This is how my father, Julius Stulman, first became connected with Lubavitch.

My father was an extraordinary man. He had minimal education — Jewish and secular — and was probably dyslexic too, although he never wanted to be categorized that way. But, he had a brilliant mind and was a brilliant businessman who managed to make money every year of the Depression. At one point, he acquired some real estate on the Brooklyn waterfront, which put him in contact with a real estate lawyer named Sam Kramer. In addition to becoming his lawyer, Sam also became a friend.

Now, Sam was an early friend of the American Lubavitch establishment, serving as their legal counsel, and he apparently talked with my father about bringing the Rebbe over. I only found this out after he died, but it was my father who signed the affidavit allowing him and his family to immigrate.

He met the Rebbe shortly afterwards, while he was still staying in the Greystone Hotel in Manhattan, just after arriving in the country on March 19, 1940. The Rebbe had already heard about him in Poland, and they had an immediate, instinctive connection. He was only thirty-three and his father had passed away nearly a decade earlier. So, the Rebbe really became my father’s spiritual father.

The next year, when I was ten years old, I remember very clearly that my father drove me out to 770 and we went into the Rebbe’s study.

I remember the Rebbe’s powerful presence, his broad face framed by a big beard and a big shtreimel. He couldn’t talk very well at that stage in his life, so he was kind of whispering to my father, but then he looked at me. It was like he peered right inside me. I don’t remember anything that was said, but I never experienced anything like that look. His son-in-law and future successor Rabbi Menachem Mendel Schneerson, then known as the “Ramash,” was there too.

While my father’s relationship with the Previous Rebbe was more emotional, personal, and spiritual, with the Ramash it was more intellectual. Closer in age, my father would sit on a bench with him outside his father-in-law’s office, like friends, discussing things. As the chairman of Merkos L’Inyonei Chinuch, Chabad’s educational arm, the Ramash was always focused on Jewish education, especially women’s education, which very few people talked about in those days.

After my father’s death, when I was organizing his files, I found the minutes to a meeting they had all had together, along with a couple other people.

Referring to the Torah reading of the week, the Previous Rebbe pointed out that when it came to constructing the Sanctuary in the wilderness, the Mishkan, G-d instructed Moses to call upon the people to participate with contributions. Two expressions are used to refer to the taking, or consecrating, or these offerings:

First it says, “They should take My offering.” Then, in the following verse, it mentions “the offering you take from them.” The connotation is that, with charity, two components are required; one is the wallet, the other is the heart. When the Torah says that the donation should come “from them,” it is referring to generosity that comes from one’s inner self.

“I’m aware,” the Rebbe continued, “that as far as giving from the wallet is concerned, Mr. Stulman has been contributing to the yeshivah and other worthy causes. But now I wish to suggest to Mr. Stulman a way in which he will be able to involve himself with all his heart, something that will truly become his essential task. And, as our Sages say, more than the donor does for the poor man, the poor man does for the donor.”

The Rebbe went on to say that for the past two and a half years, Merkos had been operating in a pilot setup, without any systematic effort made at fundraising or other preliminaries. When something had to be done, he remarked, the method of his saintly father — the Rebbe Rashab — was to do, and later to secure the financial means. So, in that initial period, he had taken on the burden of raising funds himself. Now that the success of this test has been determined, the time has come to place the organization at a proper level.

After going over some statistical data showing how unsatisfactory the state of Jewish education was in America, the Ramash mentioned two particular areas where prompt action was demanded: Enrolling additional children in a weekly “Release Time” program for Jewish public school students, and the need for suitable Jewish textbooks and literature.

The Previous Rebbe then declared that, for the present, the establishment of ten new girls’ educational facilities, taking in an additional 10,000 children to the Release Time program, and producing literature for use in this program were considered high priorities. To help finance these activities, he proposed establishing a Stulman Foundation, with Mr. Stulman as Chairman of the Board of Trustees.

Out of his great respect and appreciation for Lubavitch, my father contributed generously towards these kinds of activities, but that wasn’t exactly where he was. He wasn’t a traditional, observant Jew, or a traditional person, for that matter. He wanted to change the world. Meanwhile, the Previous Rebbe would say, “There’s a house burning down, and we have to save the Jews inside of it! Our priority must be Jewish people and keeping Judaism alive.” My father was also an idealist, and the Rebbe was very practical. These were the constant conversations they had, back and forth.

When my father wrote to tell him what he was doing, the Rebbe said, “That’s nice, but what about education?” Sometimes he would show me these letters and say, “The Rebbe is not wrong.” They always respected each other, but my father felt he had a different way.

I also had great respect for both Rebbes, too. The Ramash sent me a wonderful letter for my Bar Mitzvah, and I attended a few of his public gatherings once he was Rebbe. However, I didn’t want to have a private audience with him, even though people would invite me to come over the years. It was foolish but I had this feeling that the Rebbe was going to change my life, and I didn’t want my life to be changed. The Rebbe told my father to start putting on tefillin, and my father did. So maybe that’s why I stayed away.

The Rebbe was the great spiritual leader of our time. Judaism had become cold and impersonal, Jews were being alienated, and the Rebbe brought a fire to Judaism. Still, I remained distant; I didn’t want to get too close to the fire.