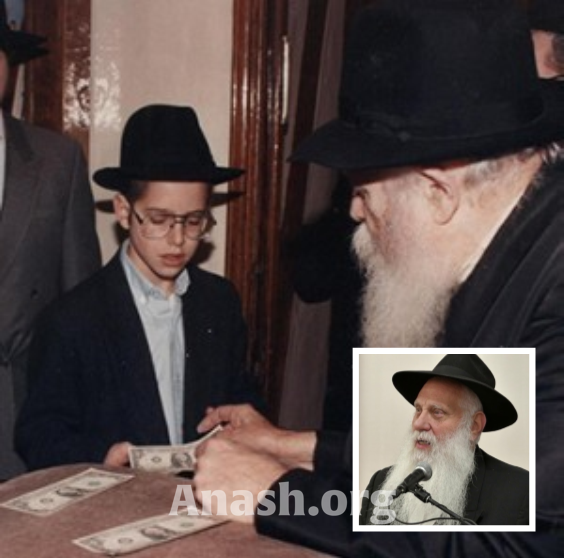 One of the unique things we were granted by the Rebbe, was that when an individual received dollar, or Kos Shel Brochah, or even if one was only before the Rebbe for a matter of seconds, there was a feeling of exclusivity. The Rebbe was there for you alone.

I recall the Sunday before my oldest son Yosef Yitzchak’s, Bar Mitzvah. It was the last Sunday I approached the Rebbe for dollars. My son had won this trip to New York from Tzivos Hashem of California, and he had written a letter requesting a Brochah for all the members of Tzivos Hashem. We waited for hours to proceed past the Rebbe. I still remember how the Rebbe looked at my son and gave this thirteen year old his time, as if there was nothing else pressing, as if no one else was in the room.

From this we can learn a lesson for the Chinuch of our children. The Rebbe was the leader of Klal Yisroel and the problems of the entire world weighed on his shoulders. However, when someone approached the Rebbe, the Rebbe gave his fullest attention to this individual and there appeared to be no other concern for the Rebbe, other than the needs of this person.

To the Rebbe, everyone who came before him was a diamond. As it was once asked of the Rebbe, how could he stand for hours and hours, hearing the problems of each one, and giving his Brochos, and yet he was never tired. The mere standing in line waiting to see the Rebbe was so fatiguing! The Rebbe answered that when you count diamonds, you never tire!

Every one of us, and everyone who passed by the Rebbe was a diamond. The Rebbe polished each individual jewel to bring forth the shine and the glow of that diamond. The same, too, we must remember that the Aibeshter gave into our hands our own diamond jewels – our children – and we must take the time to address their individual needs.

The Rebbe took his time and put his efforts into us and gave us Farbrengens, Yechidus, Kos Shel Brochah, Lekach, Dollars, Kuntreisim, Seforim, and when we had a problem the Rebbe made us feel that we were the only ones with whom he was involved. In the same way we should give of ourselves to our children so that they should be educated in the way the Rebbe wishes.

I heard the following story at a Farbrengen in Shul one Purim which illustrates how the Rebbe cares for each individual.

As a young man this Chossid learned in the early 1960’s. One day his principal Rabbi Tennenbaum, ob’m, called this boy into his of-fice and told him that tonight he had an ap-pointment with Rabbi Hadokov at 9:00 pm. The boy didn’t understand why he was wanted. At 8:30 he walked into the office of Merkos and inquired, “do I really have an appointment with Rabbi Hadokov tonight?”

They looked in the book and the secretary said yes, at 9:00 tonight Rabbi Hakokov wants to see you. Impatiently the 12 year old boy waited to see Rabbi Hadokov, and at 9:00 he knocks on the door and Rabbi Hadokov opens it and asks him to be seated. Rabbi Hadokov asks the bochur how he is and so forth, and after a few minutes of questions Rabbi Hadokov asks, “Did you have a test lately? How did you fare on the test?”

The bochur did not yet know his test results. Rabbi Hadokov turned to the bochur and told him that the marks of this test were sent in to the Rebbe and when the Rebbbe saw your mark he said only one word: “Hayetochen (how come)?” That’s why Rabbi Hadokov called him in.

Let’s think this through a bit. Would the CEO of a major business with hundreds of people and projects under him – globally – get involved in the mark of a 12 year old boy? Big deal – on this test he didn’t do so well, on the next test he will do better.

But, to the Rebbe this was not so. This individual 12 year old was a diamond and the Rebbe sought to polish that diamond. The Hayetochen does not mean that you are bad, it means that you have capabilities, you can do better, and make it happen.

The same thing the Rebbe asks each of us every day: I invested so much in each one of you!! What are we doing to bring out the Rebbe’s investment in us?

The Rebbe once said at a Farbrengen that tomorrow morning you will wake up and Moshiach will be here and you will give him Sholom Aleichem and Moshiach will ask you what you did to hasten his arrival? The same thing the Rebbe is asking from every one of us- what are we doing to bring the world closer to the revelation of Moshiach? This is accomplished by fulfilling the Rebbe’s directives, and learning his teachings and educating our children in the way the Rebbe wanted so that when Moshiach will come we will be proud to say, “See the children who we educated even in this harsh, dark, golus!”

In these dark times we must remember what happened on Gimmel Tammuz, 1927. At the train station as the Friediker Rebbe departed into exile he said, “That Hashem should be with us and will be with us to aid and protect us as He was with our ancestors.” We must keep this at the forefront of our thoughts.

We must not fall into despair. The Rebbe is with us and gives us his blessings, and it is up to us to strengthen our connection with him.