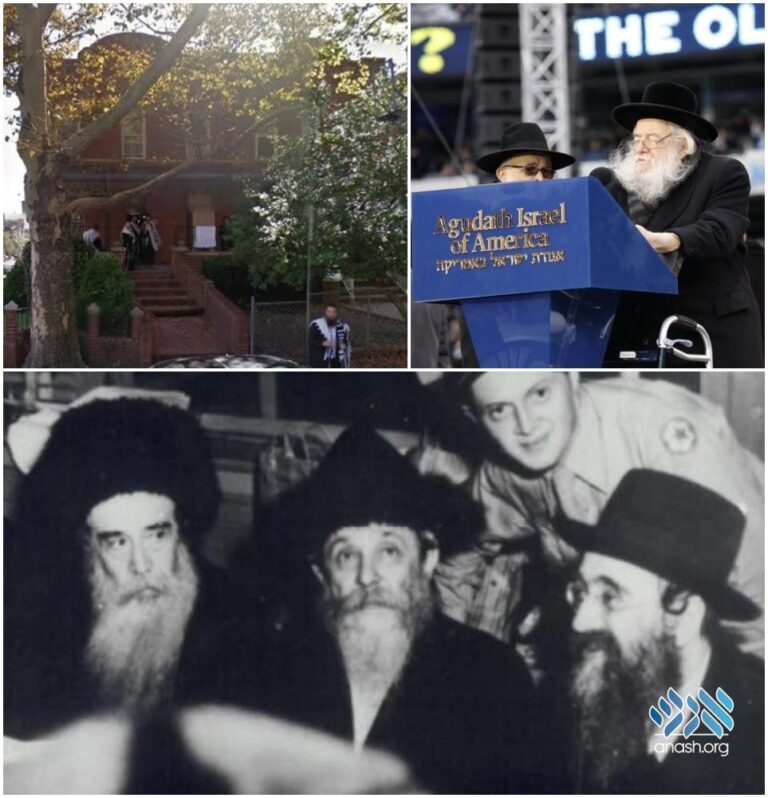 The Rebbes of Novominsk, including Rav Yakov Perlow, whose yahrzeit is Yud Gimmel Nissan, had a long-standing connection with the Chabad and the Rebbe.

Rav Yakov Perlow, the Novominsker Rebbe, passed away on 13 Nissan, 5780, at the age of 89. He headed a large Yeshiva and kollel in Boro Park and was for over two decades the head of Agudath Israel of America.

His father, Rav Nochum Mordechai Perlow, the previous Novominsker Rebbe, lived in Crown Heights for many years where he led a community and shul. That shul is now known as K’hal Chassidim-Baumgarten’s Shul at the corner of Carroll and Schenectady. The Rebbe wrote to him a famous letter concerning adopting children. He passed away in Elul of 5736/1976.

Rav Nochum Mordechai’s uncle, Rav Yehuda Aryeh Perlow, was the Novominsker Rebbe of Williamsburg. He sent the Rebbe his seforim, and the Rebbe responded with detailed comments. The Rebbe began by addressing him as ש”ב – my relative, seemingly because he was as eynikel of the Chernobler Rebbes, as was the Frierdiker Rebbe. He passed away in Elul of 5721/1961.

In 5714, when Rav Yehuda Aryeh was sitting shiva for his wife, the Rebbe visited him and a lengthy conversation ensued. On the way back to 770, the Rebbe noted how the senior Novominsker had already been in America for 30 years and was the same as if he’d be in Europe. (The full conversation can be found in Toras Menachem – Menachem Tzion Vol. 2.) The Rebbe also told those in the car about the Novominsker Rebbe that he is a “varemer Yid.”

The late Novominsker Rebbe, Rav Yakov Perlow, who passed away this month, visited the Rebbe for nichum aveilim for Rebbetzin Chaya Mushka, on 26 Shvat 5748, the fifth day of shiva. The Rebbe had a discussion with him about who will build the third Beis Hamikdosh.

The 8 minute plus conversation can be heard below. From the transcript, it would seem that the recording was cut off towards the end of the conversation.

For more on the relationship between the Noviminsker Rebbe and Chabad, see the fascinating interview with Rabbi Lipa Brennan here.

AUDIO: The Rebbe and the Novominsker Rebbe