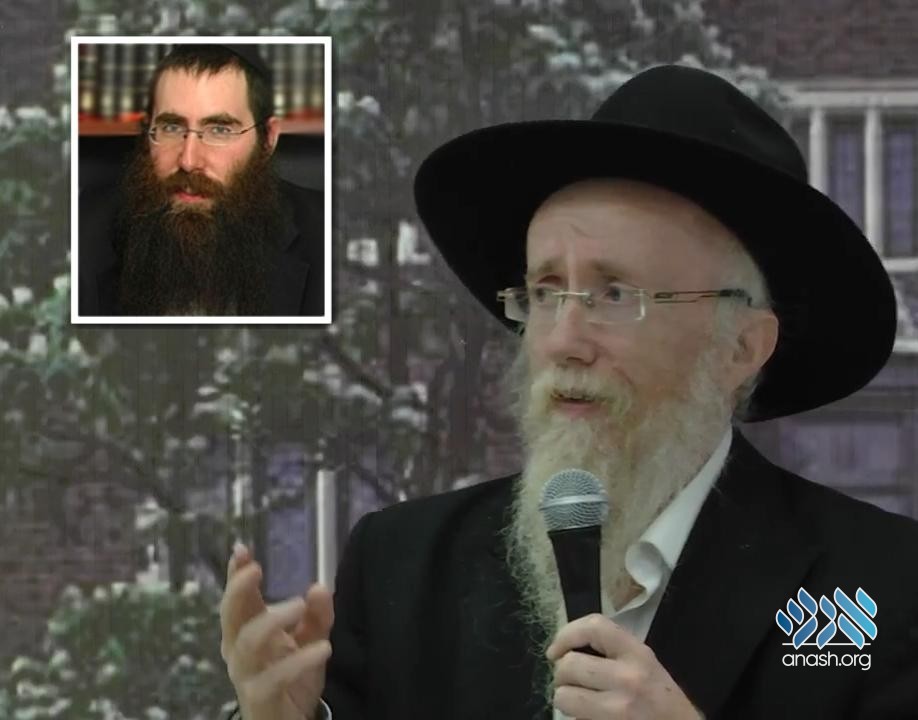 Rabbi Chaim Chazan, Rosh Yeshiva of Yeshivas Chabad Dnieper, Ukraine, relates memories of the mashpia, Reb Zalman Notik a”h. “Many didn’t see eye to eye with him on certain issues, yet I chose to derive inspiration from his true dedication to avodas Hashem.”

Rabbi Sholom Gold, an activist for the Religious Zionist Mizrachi organization, was visiting Baltimore. He chose to stay at the home of Rabbi Yaakov Ruderman, rosh yeshiva of the Litvish Ner Yisrael yeshiva. The city’s local Zionist leaders were dismayed at his choice of being hosted by a decidedly non-Zionst rabbi.

When they questioned him about this, he responded, “There are 613 mitzvos. I have a disagreement with Rabbi Ruderman over one of them – the mitzva of yishuv Eretz Yisroel – but we agree on the other 612. With regards to yourselves, we agree on one mitzva, as we are all Zionists, but we disagree about the other 612 since I’m religious and you are not. Where then do I feel more at home?”

I am reminded of this anecdote when reflecting on Reb Zalman Notik a”h, mashpia at Yeshivas Toras Emes in Yerushalayim when I studied there some twenty years ago, who recently passed away after a battle with Leukemia at age 51. Many Lubavitchers, including myself, didn’t see eye to eye with him on certain Moshiach issues, yet then as now, I choose to focus on the vast majority of perspectives that we shared, and derive inspiration from his truly unique personality and dedication to avodas Hashem.

Interestingly, I think that tolerance of people that didn’t agree with him was in fact one of the things that made him so likable. When I came to yeshiva, despite him knowing my position on issues that were of great importance to him, he gave me his full attention without intent to change me. He accepted everyone for who they were.

When I learned in Toras Emes, we were blessed with exceptional mashpi’im, including Reb Chaim Sholom Deitch, Reb Fitche Ofen and Reb Avrohom Boruch Pevzner – all tzu langeh yahren – unique and towering personalities in their own ways. There was much to be learned from them and we certainly did. But it would be inaccurate to say that they were part of our world. And thankfully so; they rose above the petty concerns of ordinary people.

Sometimes because of the angst that comes with teenage life, a bochur can feel intimidated and find it difficult to bridge the chasm between himself, an ignorant, indulgent bochur and the inspired chassidshe Yid that is the mashpia. The bochur may wonder if the mashpia truly relates to him.

In that context Reb Zalman Notik stood out. He came across as a normal person who just “happened to be” a chassidishe Yid. He just had a certain commonness about him that served as an important motivator for bochurim. He’s just like me, but he worked on himself to become a chassidishe Yid and so can I. Along with a relaxed and informal personality, he was eminently approachable. He was sharp and down to earth, allowing him to fully appreciate where the bochurim were coming from.

He was devoted to all the bochurim in the yeshiva, not only those in his shiur. I personally never learned in his shiur, but I still had a very close relationship with him. (When my sister visited Eretz Yisroel and needed a place to stay for Shabbos, the first person I thought to ask to host her was Reb Zalman.)

Another unique feature of Reb Zalman was his vivacious outgoing personality, on display via his constant smile. A consummate extravert, he was a living example of the idea of איש חי להחיות – full of chayus which in turn gave chayus to those around him. His sense of humor created an aura of pleasantness around him. A farbrengen of his was a warm experience. Besides the fact that he was intelligent and articulate, he was a particularly good speaker that captivated the audience.

Every Friday night after the seuda, he had a farbrengen at his home. It had nothing to do with the seder of yeshiva: it was just his own private thing. Bochurim went because it was fun and enjoyable. The atmosphere was light and inspirational at the same time.

I recall two themes that were a constant refrain at his farbrengens.

The first was total devotion to the Rebbe’s inyanim.

He once described the Shabbos schedule of a chassidishe bochur in yeshiva. The bochur wants to learn Chassidus on Shabbos morning at length, but he has to go to hakhalas kehilos and share a sicha in a Georgian shul, walking half an hour there and half an hour back in the sun. Then he’d learn Chassidus and daven slower than the minyan, trying to focus on what the words of davening mean to him on that specific Shabbos. After musaf, he doesn’t make kiddush right away because he has to read shnayim mikra. By then, there is only time to grab a quick seuda and run to mesibos Shabbos for children in a park some 20 minutes away. Despite generally not using the mehudardike eruv in Yerushlayim, the bochur will carry the nosh for the mesibos Shabbos, because that what’s needed, and his personal chumras can’t get in the way. From there he rushes to mincha and chazaras dach in a nearby shul, until returning Motzaei Shabbos like an oisgeklapte hoshana.

For Reb Zalman that was the ideal. To completely give away a whole Shabbos to helping others, leaving little time for yourself.

The second repeated theme I remember from his farbrengens was simcha. He didn’t see a place for a display of yearning and the longing for the better times before Gimmel Tammuz. His focus was on the future.

He often mentioned the famous maamar (מרגלא בפומיה דרבא תשמ”ו) where the Rebbe says that in this generation there is no place at all for the merirus that is extolled in Tanya, only simcha. He applied this to himself and he encouraged others in that direction.

Reb Zalman was a baal midos tovos in a self-effacing way. One example remains deeply ingrained as a result of the important lesson I derived from the episode.

At a farbrengen, he once said something that a chossid at the table really didn’t like. The other chossid just lashed out at him, really criticizing him, as if it were a buildup of pent-up emotions that burst. It was uncomfortable for the bochurim sitting there for their mashpia to be berated in front of them by another chossid. I had noticed that Reb Zalman seemed unfazed and continued farbrenging as if nothing happened.

The next day I happened to meet Reb Zalman at the mikva. I asked him how he managed to sit there at the farbrengen and accept such criticism in public without responding to defend himself. It seemed as the other chossid’s words went right over his head and it didn’t have any effect on him. Wasn’t he offended and upset?

He told me, first of all, that morning the other chossid had already approached him and apologized. But mainly, he said, “Didn’t you see that this person has something bothering him? He has a chip on his shoulder and feels like everyone is against him.”

Reb Zalman shared with me that he served on the board of a certain Chabad school. This chossid once approached Reb Zalman requesting he use his influence to secure his daughter-in-law a position at the school. Reb Zalman tried but was unsuccessful. When Reb Zalman reported his lack of success, the chossid retorted that it was only because of her last name, as if to say everyone had it out for him personally.

Reb Zalman concluded, “Don’t you see that it’s hard for him?”

What I saw then was a display of an attitude that when a person was arrogant or nasty, Reb Zalman’s immediate approach was to rise above his own ego, and to see the other person’s hurt. He genuinely saw no reason to be offended.

The above isn’t a complete description of Reb Zalman, but a few memories that we can perhaps aspire to emulate.

A fund has been set up for the family of Reb Zalman Notik. Please click here to donate and help the family during these trying times.