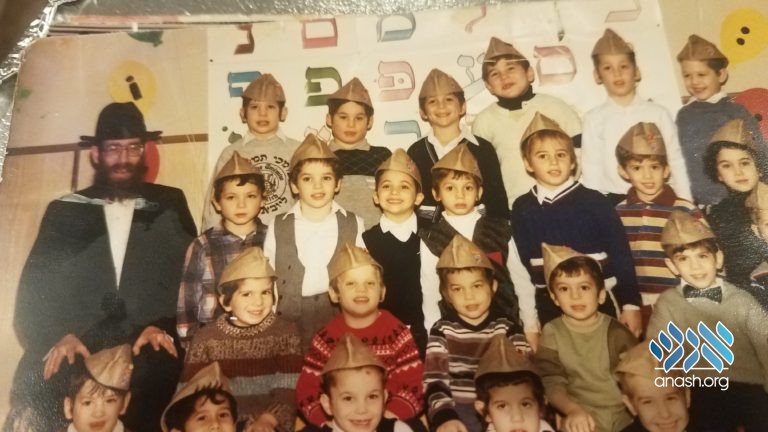 It was just a few hours ago, that I received the “BD”E Rabbi Katzen” message. My mind froze up, not being able to digest this new information. I thought of my fellow classmates of United Lubavitcher Yeshiva, and of our dear friend – and Ben Yachid of Rabbi Katzen – Moshe Yitzchak sheyichye. Just this morning, I reminded myself that Moshe once told me “My Tatty does not sleep on the two nights of Rosh Hashana”. I ran to my basement, where some of my old pictures are kept, and found our class picture (enclosed) of 5746 and began wiping my tears.

Rabbi Katzen A”H, loved and lived for every child in his class. When I would later read in the Sichos of the Frierdike Rebbe of the Yiras Shamayim instilled by the Chassidishe Melamed, I would always think of Rabbi Katzen. The sincere enjoyment that he had when we made a Bracha loud and clear, when we learned the holy Alef-Beis and the Nekudos, when a young boy would come into our class for his “arainfirnesh” after his Upshernish, stay with a young talmid forever.

I want to share with you a typical episode that made an everlasting impression: In addition to teaching our class in Pre-1-A, he also taught us in the afternoon in the second grade. One day, he made an announcement: That there would no longer be marks of Alef+ or Beis+, rather there would be an Alef with a “pretzel symbol” and Beis with a “pretzel symbol”. We all wondered why he would do that? He explained that the Rebbe only wants Jewish children to see pure and kosher things. Being that the plus sign can look a “goyishe tzailem”, he was removing it from our classroom.

To Rabbi Katzen it only mattered that the children should receive the purest chinuch filled with Emunah in the Rebbe. Many people know that he would make a weekly Mesibas Shabbas, but most don’t know – or remember – that he would do the same thing in the middle of the Rebbe’s Farbrengens! He saw kids running around and disturbing, so every week he would give up his opportunity to hear the Rebbe and take the kids upstairs for a rally. He was entirely selfless and full of true Ahavas Yisroel. Every time he would see me, he would stop and ask with a big smile, “How are you Gershy?”

Every boy in that class picture has gone on their own journey of life, yet we all carry inside of us, the eternal seeds of Yiras Shamayim planted with love by Rabbi Shmaryahu Katzen. May his family find comfort and may we see him leading the rallies in the third Beis Hamikdash, during the Rebbe’s Farbrengens, now!!