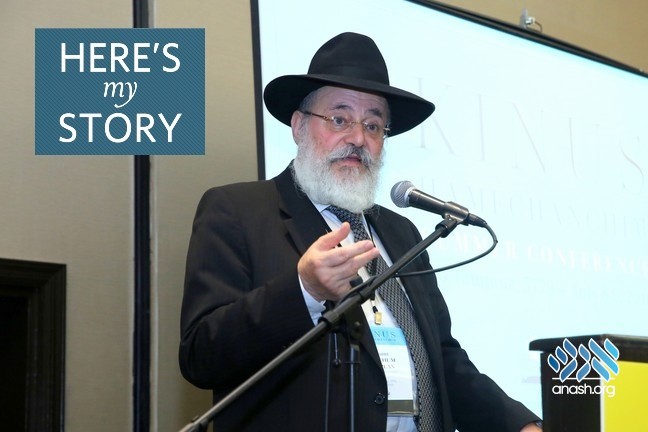 Rabbi Nochem Kaplan tells of a few encounters he had with Rebbetzin Chana and a lesson she shared with him that she heard from her husband Harav Levi Yitzchak Schneerson.

Rabbi Nochem Kaplan is the director of the education office of Merkos L’Inyonei Chinuch, Chabad’s central outreach organization, which provides guidance to Chabad-run schools nationwide. He was interviewed three times in September and December of 2020.

I was an infant when we escaped the USSR at the end of World War Two. After a harrowing journey through Poland into Germany, we arrived along with other refugee families at the displaced persons camp in Poking, near Munich. Many Chabad chasidim found refuge there, creating a small but vibrant community of their own. The refugees, who had been denied the opportunity to educate their children in the Soviet Union, quickly opened Jewish schools for boys and girls and a yeshivah for young men.

The DP Camp was on the site of a former air force base and the large barracks had been divided into small cubicles, one for each family. Our family’s cubicle was next door to that of Rebbetzin Chana Schneerson, the Rebbe’s mother. And that is how we got to know her.

She was able to immigrate to New York in 1947, but we settled first in France and then in England and didn’t arrive in America until later, when I was already eleven. Once we arrived, my family renewed our relationship with her. We visited her a number of times in her home, but we didn’t call her Rebbetzin Chana — we called her “the Rebbe’s mammeh.”

I recall that, on Purim 1958, my younger brother Leibel and I were sent to bring her mishloach manot and that Reb Berel Junik answered the door, announcing that “the Kaplan kinderlach” had come. She remembered me from Poking, and we chatted for a moment, as she rewarded us with some candy. We came on other occasions too and each time she greeted us warmly.

There was one particular encounter with the Rebbetzin that I remember most vividly. It was the day after my Bar Mitzvah — which fell on a Friday in the spring of 1959 — and I was walking to 770 down Kingston Avenue when I came upon Rebbetzin Chana. “Gut Shabbos,” I greeted her politely and she answered, “Gut Shabbos.” I couldn’t resist taking the opportunity to tell her that my Bar Mitzvah was yesterday.

Of course, she showered me with blessings, and then she said, “Do you remember how I always made sure in Poking that your head was covered when you were outside?”

I was too young in Poking to have a memory of that. She went on, “My late husband told me that a boy — no matter how young — should never go outside without head covering, as it can affect his yirat shamayim, his awe of heaven, later on in life. And if he pulls it off, one should put it back on, but he should never go around bareheaded. You didn’t like wearing your little hat and would pull it off, so I had to keep putting it back on.”

A few months earlier, I had another interesting encounter with her. On Simchat Torah of 1958, my father allowed me to come to the Rebbe’s farbrengen and — for the first time — stay up for the night-long celebration. In the wee hours of the morning the Rebbe would teach a new nigun, a chasidic melody. That was the custom in those years.

I very much wanted to stay up for that special moment and, somehow, I succeeded in keeping my eyes open. Hundreds of chasidim had packed into the huge sukkah and I also found a perch on a bench from where I could see everything.

The Rebbe began by telling the story of Shamil, who was a great leader of a group of tribes that lived in the Caucasian Mountains over a century ago. Captured and exiled by the Russians, Shamil mourned his loss of liberty and yearned to return to his home. But he consoled himself with the hope that he would eventually be released and return to his beloved land and his former glory.

It was a sad story and the Rebbe told it in an emotional way. He went on to explain that Shamil is a metaphor for the soul as it descends to this world and is enclothed in the human body. The body is the soul’s “prison” and the soul constantly yearns for its heavenly home. It strives to free itself from its corporal exile by urging the body to give life spiritual meaning through the Torah and its mitzvot.

As the Rebbe talked of the yearning of the soul for heaven, his voice cracked and he started to cry; he cried so hard that his whole body shook. When he composed himself, he began teaching all those assembled Shamil’s nigun.

It was an extraordinary experience and I didn’t get to bed until after 5 a.m. Not surprisingly, I overslept and got up late. I was rushing down the street in the early afternoon when I ran into Rebbetzin Chana. Seeing me at that hour, she immediately guessed the cause. “You stayed up for the nigun last night?” she asked.

When I acknowledged that I did, she wanted to know which nigun had been featured.

“I don’t remember the nigun,” I answered honestly. “But the Rebbe told a story of a man whom he compared to the soul of a Jew and he cried a lot.”

At that she said nothing, just smiled, and we walked together to 770. There, instead of going into the building, she started walking down the incline to the sukkah, where the Rebbe was leading the dancing with the Torah. She came to the swinging doors and stopped. “Do you want to go in?” I asked. She nodded that she did, and I opened the door for her.

I understood that she wanted to see the Rebbe, so I started tapping guys on the shoulder to clear a path for her directly to where the Rebbe was standing. In no time, the sea parted for her, but she continued to stand where she was, just looking at the Rebbe. When he saw her, he said “Gut Yom Tov.” She smiled and responded “Gut Yom Tov,” and then she left.

Naturally, people wanted to know what this was all about, and what part I had played in it. And they squeezed out of me that I had told her about the nigun and about the Rebbe crying.

She must have been moved to hear that he had cried so hard and, as a mother, she just wanted to see him after an emotional night like that.