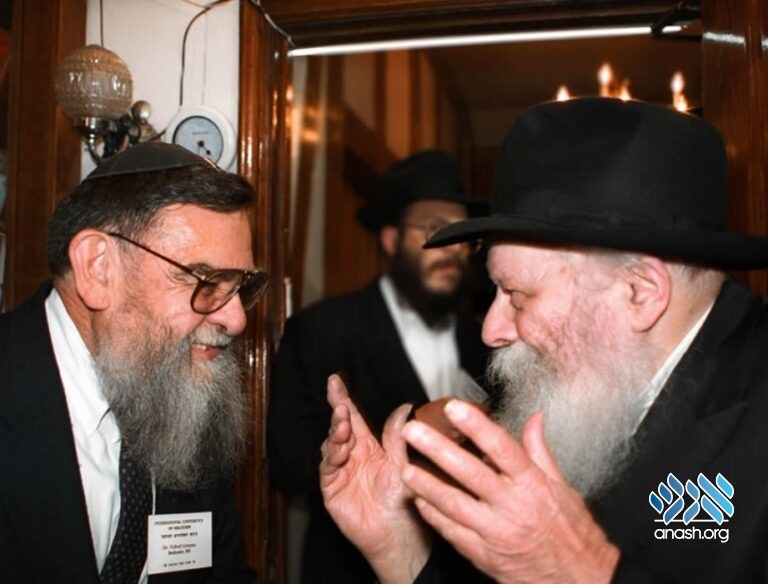 Motzei Shabbos Story: When Professor Velvl Greene was informed of the Rebbe’s opinion on evolution, he decided to send him a letter challenging him. But the Rebbe’s response did not arrive until years later.

In 1963, Professor Velvl Greene of the University of Minnesota was a rising star in the firmament of science. Acclaimed as a pioneer in his field of bacteriology, he was invited by NASA to join a select team of scientists studying the possible effects of space travel on human life. The requests to lecture at various forums and symposiums kept pouring in, and soon the young scientist was visiting dozens of universities throughout the United States each year.

1963 was also the year in which Dr. Greene first came in contact with Rabbi Moshe Feller, the Lubavitcher Rebbe’s emissary in Minneapolis. Up to that time, Velvl and his wife, like many American Jews of their generation, had little use for their Jewish heritage; observances such as Shabbat, the kosher dietary laws and tefillin struck them as old-fashioned if not primitive, and certainly without relevance to their modern lives. But their association with the Fellers changed all that. In the young chassidic couple the Greenes saw a vibrant and fulfilling outlook and lifestyle, which seemed to answer a deep lack in their own highly successful but rootless lives.

At Rabbi Feller’s suggestion, Dr. Greene wrote to the Rebbe, and the Rebbe’s warm and engaging reply was not long in coming. The two developed a steady correspondence, and the young scientist was soon taken by the Rebbe’s phenomenal mind and passionate devotion to his calling. With each letter, the professor found himself further encouraged in his journey of spiritual discovery and his growing commitment to a Torah way of life. Soon, the Greenes were establishing a kosher kitchen in their home and groping their way through the rudimentaries of Shabbat observance.

In one of Velvl’s discussions with Rabbi Feller, the issue of “Creationism versus Evolution” came up. Here the professor proved his old, scornful self. “You know that I have great respect for the Torah,” he said. “Its teachings and observances now fill a most important role in my life. But regarding this issue, you people are still stuck in the Dark Ages. It amazes me that you still take the story of a six-day creation literally, in face of all that science has discovered about the age of the universe and how it developed.”

“I must concede that my scientific knowledge is limited,” said Rabbi Feller. “I certainly cannot discuss this with you on your level. But the Rebbe wrote a lengthy letter on the subject, in which he demonstrates how the theory of evolution is just that, only a theory, and a poor one at that—fraught with contradictions and lacking any sound scientific basis.”

The professor was incredulous. “The theory of evolution is accepted by virtually every serious scientist alive! But show me the letter—I’d like to see what the Rebbe writes.”

After reading the letter, Velvl was still unconvinced. When he presented his objections to the Rebbe’s thesis to Rabbi Feller, the latter again professed himself unqualified to argue science with a scientist. “Why don’t you write the Rebbe?” he suggested.

This Dr. Greene did, penning a no-holds-barred critique of the Rebbe’s arguments. “Because I greatly respected the Rebbe,” Dr. Greene recalls, “I dropped the condescendingly forgiving tone that scientists usually assume with laymen, addressing the Rebbe as I would a colleague whose ideas I rejected. I bluntly stated that he was wrong, specifying what I saw as faulty and unscientific in his arguments. I concluded my letter by saying that the Rebbe had best stick to his field of expertise, Torah, and leave science to scientists.”

The Rebbe’s next letter resumed their correspondence where it had originally lain—in Velvl’s spiritual quest and his Jewish identity. Of the evolution issue, not a word. The professor assumed that the Rebbe had been chastised and was conceding that in matters of “empirical fact” Torah must defer to current scientific thinking. With this, he considered the matter closed. His progress towards a Torah-true life continued, and in the course of the next year and a half, he reported to the Rebbe each of the milestones he and his family were passing in their journey: full Shabbat observance, observance of family purity, etc. The Rebbe responded with words of encouragement and blessing and, on one occasion, a gift of a pair of tefillin, which Velvl began to put on each day.

Then came the letter in which the Greenes told the Rebbe that they had decided to place their children in a yeshivah, a Torah day school that would provide them with a full Jewish education. The Rebbe’s reply was especially warm and encouraging, as befitting the turning point in their lives that such a move indicated. Then, at the end of his letter, the Rebbe added, “By the way, concerning what you wrote me in regard to the Torah’s account of creation . . . ,” and proceeded to refute, point by point, Dr. Greene’s objections to the Rebbe’s “unscientific” treatment of the subject.

“You are probably wondering,” concluded the Rebbe, “why I waited this long to respond to your remarks on the matter. But my job in life is not to win arguments. My job is to bring Jews closer to the Torah and its mitzvot.”