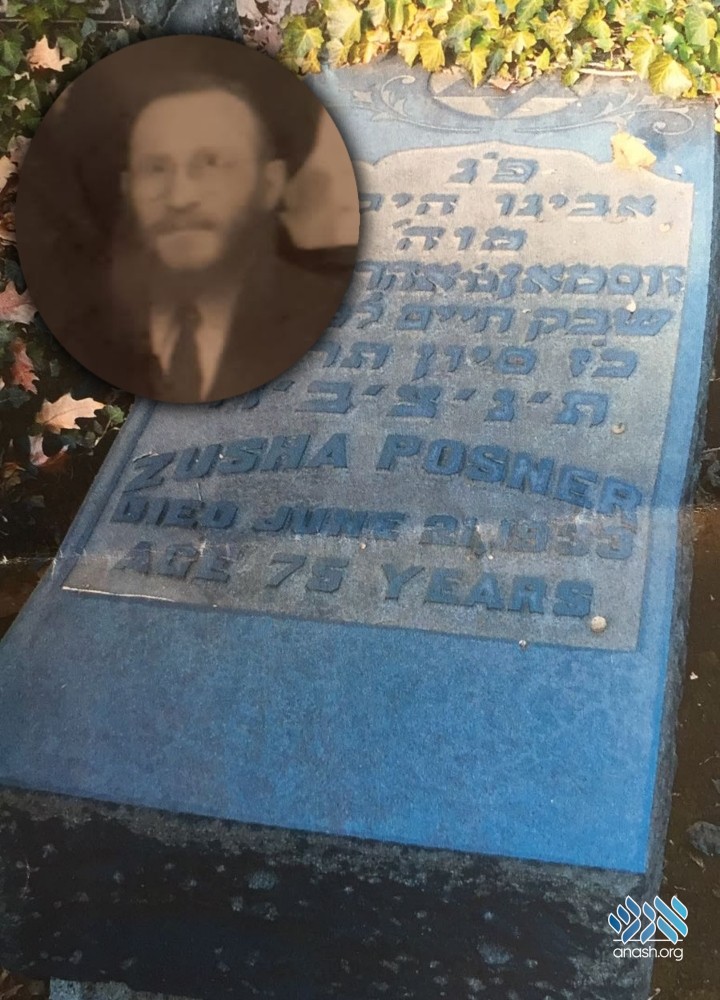 Rabbi Shimon Posner recalls the history of the early years of the Posner family in America, and the fight his grandfather and others put up to keep their beard. Plus a tribute to Reb Zushe Posner, who recently passed away.

My children played a board game when they were younger, Guess Who?, where you deduce the identity of your playmate’s mystery character by asking:  does your guy have brown hair? are they wearing a scarf?  And the unforgettable one, do they have facial hair?  And from a four-year-old’s  squeaky “do they have facial hair?” the expression seemed ridiculously beyond their years.  Say a beard, a moustache, but no, truth be told, facial hair is the appropriate question, precociousness notwithstanding, inclusive as it is of muttonchops, sideburns, goatees and of course, beards and moustaches.

Lately I’ve found out just how central beards have been to my family. For many generations. My grandfather’s grandfather, my great-great grandfather, named Zushe, came to America with all his children, with his brothers and sisters, and, remarkably, his father. Before this gets confusing here’s a brief family tree: Aharon Ber, Zushe, Itche Zalman, Sholom (Pittsburgh), brothers Zalman (my father) Laibel and Zushe.  A few years ago I met (the original) Zushe’s niece, she was 107 at the time and has since passed.  She was sharp as a tack, and minced no words. “The men in the family were all good looking, except your grandfather Zushe. He was scrawny and he had a beard.” Her tone took me by surprise.

None of Zushe’s brothers maintained their beards in America, and none of his children did either. Except his oldest son, Itche Zalman. He made a living for himself in the New Country as a butcher. Soon he threw in the towel and moved back to Russia. Explaining his move against the tide to Rabbi Jacobson, his friend in Russia, he said teenagers would throw stones and snowballs at any Jew with a beard, there was just too much animosity for keeping one’s beard.

He raised his children in Russia and one Thursday, returning home for Shabbos, he was attacked on a ferry by White Russians and murdered. (The “Whites” were the pro-Czar forces who fought the “Red” Communists, and “knowing” that “all Jews are Communists” they murdered this devout Jew.) Days later his corpse was found on the riverbank by his son, my grandfather Sholom, his talis stuffed down his throat. Sholom buried his father and with his bride, my Grandmother Chaya, went to Israel, where they married, and several years later came to America.

Here in the New Country he met his grandfather (his grandmother Kenya had passed less than a year earlier), his aunts and uncles and his cousins. He, Sholom was the greenhorn, and, it’s fair to say, an unwelcome reminder from whence they came. Except Uncle Phil, married to Itche Zalman’s younger sister Saidie. Himself a cheder yingel from the Old Country, he had grown successful in America, the first Jewish CEO of a major company and renowned in his field of electrical engineering.

In his nephew Sholom he recognized philosophy professorship material, and offered to put him through school and support the family for however long it took, and, to keep the young immigrant’s dignity intact, the loan would be paid back on terms to be decided by the borrower once he lands a position, which Uncle Phil would use his influence to help procure. And keep your traditions, Uncle Phil insisted, they make you who you are, and America is a free country that allows you to do so. Only one thing you might consider, he conceded, your coat: maybe you can shorten it. And your beard, maybe you can straighten it?

The penniless couple, Sholom and Chaya, were speechless from the generous offer, and after discussing it turned it down. “Without having yet taken anything from him he offers advice”, Chaya noted, “once he gives and we take then advice can no longer be declined so easily”. I’ve heard that years later, when they arrived in Pittsburgh’s Squirrel Hill, landlords had no rentals available.

My father was, of course, raised in America. Once, when I was already a teenager, he was asked “I was told the beard contains Thirteen Attributes of Divine Mercy. How did they get there and where are they?”

“I doubt anyone really knows the answer to that except the Rebbe,” my father allowed himself a sigh, “but when we were teenagers and everyone gave us a hard time about wearing beards in America, we heard stories of yeshiva boys under the Soviets who covered their cheeks with their hands (he did so as he spoke) ‘you’ll chop off my hands before you touch my beard!’ they’d say. And having heard that how could we look ourselves in the mirror and shave?”

His friend Velvel Schildkraut raised the ire of his own mother and aunt at his pubescent hirsute pursuit and they came to beseech the Frierdiker Rebbe to knock some sense into his head. My grandmother interjected in defense of the teenager boy.

Years later I flew to Nashville to sit shiva for my father. An older woman told me that 65 years earlier, when my parents first came to Nashville, her mother and her uncle had bet a dollar: which would happen first, would the beard come off or would the new rabbi scurry back to Brooklyn? He was the only man with a beard for hundreds of miles – except for boxers who needed to hide their facial wounds – and kids in the street would ask him if he boxes.

He would visit his congregants in their stores, including Charlie Berss’s liquor store. A deeply disgusted patron glared at my father.

“What’s with those whiskers?”

“Well”, answered the young rabbi, “you know the rugged individualists who settled this great country, who did what they know to be right and not what everyone else did? Well, I’m that individualist.”

The patrician gentleman took a moment to absorb that.

“Sir,” drawled he, “I still don’t care much for those whiskers, but I truly do love those sentiments and I’d be deeply honored if you would shake my hand.”

Me? By the time there was a whisper of a shadow upon my face I was deeply ensconced in yeshiva, and didn’t even know anyone my age who even considered shaving. The only time my beard came close to being an issue was when I became a prison chaplain and an officer made broad public statements meant for my beard – which I ignored. Later I thought I could’ve-would’ve-should’ve said “would you say the same to Abraham Lincoln?”

Of course I came of age after the Sixties and beards were pretty much accepted. Now even more so: Hipster or Hasid is the new guessing game. But for the next generation I wonder, can they relate to the deep significance the facial hair possesses? If it is so accepted, does that not render obsolete any discussion, any discovery of the saga therein? And in the guessing game Hipster or Hasid, is not the most evident question, what difference does it make?

Mine is only one family’s beard story, and only a tiny sliver of my family maintained that beard. A pattern is here:  Zushe was not learned but he was a man of deep faith, we are told. It sufficed to keep his beard intact. Itche Zlaman was learned, and younger, and he recognized he could not withstand the pressure borne upon his beard. His son, my Zaide Sholom, learned in the famed yeshiva of Lubavitch: he raised his sons in this country who maintained their beards. Who fought for their beards.

The fight now is markedly different, or indifferent. Nonchalant indifferent. That is much harder to resist than an articulated threat. I don’t know what to tell those yungerleit/bachurim my children’s age, and soon my grandchildren’s age. So I tell them this story because in a story is a feeling and in that feeling is a sanctity and (in a way only the Rebbe can understand?) that sanctity is in a chasidishe beard. And that sanctity, that saga, is theirs.

ENDNOTE: My father’s brother Zushe was named for his great-grandfather who maintained his religious dignity when few appreciated it. Zushe spent his life conveying the feelings he absorbed in his parents’ home to generations of students. As of this writing, my cousins, his children, are sitting shiva for him. May his take-no-prisoners style combined with his genuine love for his talmidim, turn every apathy to exuberance. May Zushe’s teachings continue to work their magic.