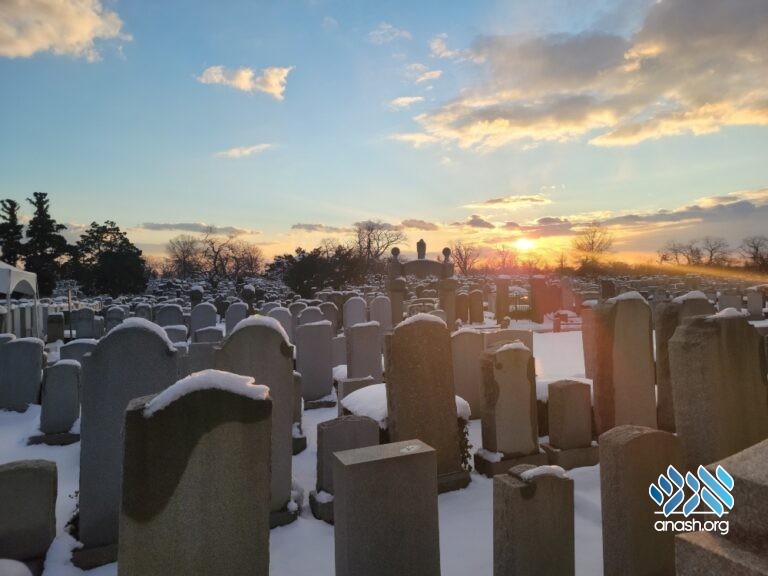 Motzei Shabbos Story: While visiting her husband’s grave, a despondent widow paid her respects at the unmarked grave of a poor peddler. A few days later, the peddler himself returned to return the favor.

A wealthy businessman in Frankfort, Germany, lost all his money and started accumulating tremendous debt. Bitter and despondent, he fell ill and passed away, leaving his wife and children in great poverty.

His widow resolved to go to work to support her children, but there was one creditor who pursued her ruthlessly for payment of her late husband’s debt. He eventually took her to court, and the court ruled that if she did not pay the debt, he was entitled to all her belongings.

With no one to turn to amongst the living, she went to the cemetery to pray at her husband’s grave and asked him to intercede in heaven on behalf of his family. She spent a long time crying over his gravestone, pouring out her sorrows.

When she finished, she looked up and noticed a nearby plot that had no gravestone. She asked the custodian about it, and he explained a poor peddler was buried there, having died without leaving enough money for a stone to mark his grave. However, he said, many people, mostly the poor who remembered his kindness, came from time to time to pray and light candles in his memory. Upon hearing this, the woman took one of the candles she had brought to light at her husband’s grave and lit it by the grave of the peddler.

The widow went home and almost forgot about the debt until the day came when the agents of the court arrived with a cart to take away all their belongings. She pleaded with them, but was told that they had no choice; it was an order of the court. In short time, they emptied the contents of the home amid the cries of the widow and her children.

Suddenly, a ragged stranger appeared and asked the officers what was going on. After learning they were taking the belongings from the widow to pay her husband’s debt, the poor man asked, “How much is the debt?”

“More than you could possibly have.”

The officer went back to the widow’s home to return her belongings and told her to thank the stranger who had paid off her debt. But much as she searched, she could not find him. After inquiring, she found out that no one had seen him besides the officer. The conclusion they all came to was that it was the pious peddler who had come from his grave to help her!

The widow could not rest after this incident, as she wanted to express her gratitude to her benefactor.

She went to Rabbi Pinchas Horowitz, known as the Baal Haflaah, who was the city’s rabbi at the time, and told him the whole story. He praised her for her noble intentions, blessed her with success in raising her children, and told her that if she should one day have enough funds she should build a monument on the peddler’s grave and see to it that Kaddish and Mishnah be said on the anniversary of his passing.

“Therefore when he requests something from someone he should consider the weak and the strong person equally able to perform his request. He should rely on G‑d that his request will be fulfilled. Then he should thank the creator who fulfilled his wishes and also thank the person through whom the favor is done, for the fact that the Creator brought his benefits through him. For it is well known that the Creator causes good to come only through the Righteous.” (Gate of Trust (Kehot), Chapter 4, Page 159.)