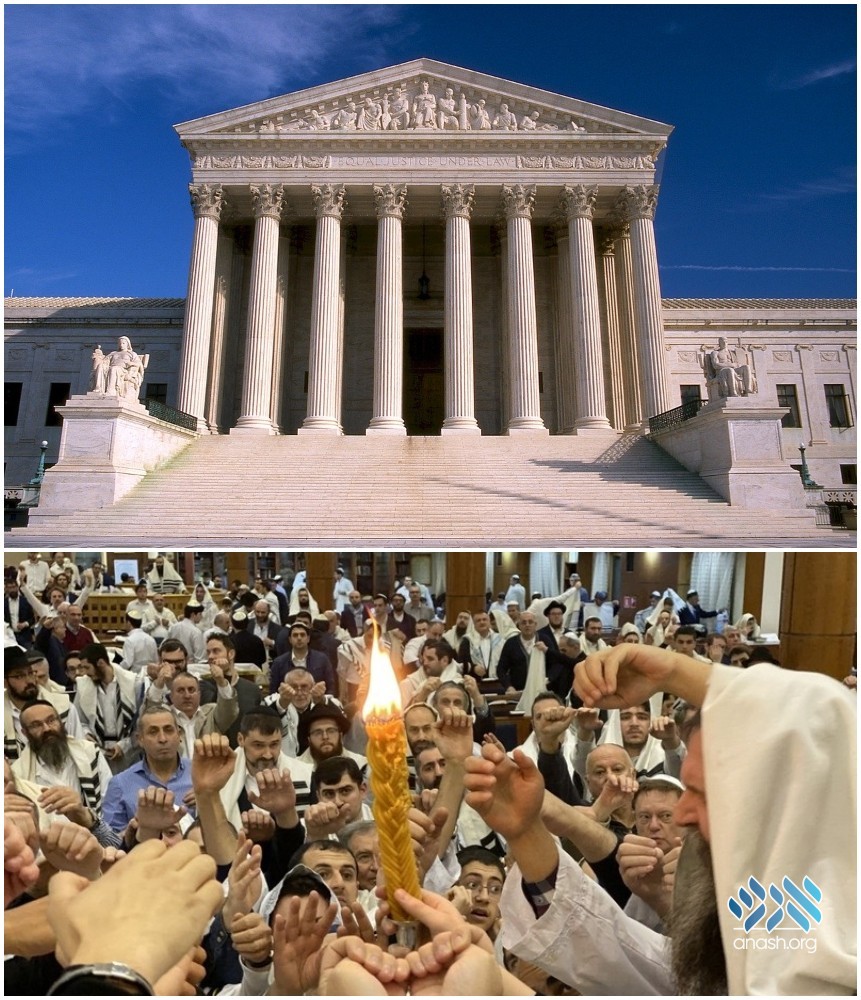 In 2003, the US Supreme Court was set to commence on Yom Kippur. It was thanks to Justice Ruth Bader Ginsburg, who passed away last week, that the date was changed, even though it involved creating a new precedent.

From the archives of Rabbi Chaim Dalfin as written by Shlomo Hamburger.

In 2003, Yom Kippur, the holiest day in the Jewish calendar, fell on October 6. That year, October 6 was also the first Monday in October. By federal law, the U.S. Supreme Court term commences on the first Monday in October of each year. And since 1975, the Court opened each term with oral argument presentations. Not in 2003 though. That year, in deference to the Jewish holiday and in no small part due to the efforts of Justice Ruth Bader Ginsburg, the U.S. Supreme Court officially deferred oral arguments until Tuesday October 7, 2003. We know that it happened, but how did it happen?

Justice Ginsburg told me the story in 2016 and here it is, as I heard it from her.

Justice Ginsburg spoke first. During her remarks and in an off-hand comment, Justice Ginsburg pointed out that the U.S. Supreme Court always opens its sessions on the first Monday in October; but that year, in 2016, Rosh Hashanah (the Jewish New Year) fell on Monday, October 3. In deference to the holiday, Justice Ginsburg explained, the Court would not hear oral arguments in cases until Tuesday, October 4.

Knowing that there was a federal law requiring that the Court commence each term on the first Monday in October and knowing the long-standing practice of hearing oral arguments on that first Monday of each term, Justice Ginsburg’s comment struck me. The Supreme Court is steeped in its traditions and certainly if any institution is going to follow the law, it would be the U.S. Supreme Court. How did it happen that the Court just moved the date for oral arguments?

I got my chance to ask the Justice how that came about when the group left to have dinner in the great hall just outside the courtroom. Justice Ginsburg was seated at a table by herself. I sat next to her to ask how the decision was made to move oral arguments in 2016 in deference to Rosh Hashanah.

In response to my question, she immediately turned to me and told me the story. ”Several years ago,” she began, telling me about the 2003 precedent, “Yom Kippur fell on the first Monday in October. Justice Breyer and I went to the Chief Justice [Justice Rehnquist] and pointed that out. We said that the Court should delay the opening in deference to the Holiday. The Chief was not persuaded. He said ‘Why should we delay? We always hold our Friday conferences on Friday, even if it is Good Friday.’ So I replied to him ‘So move that conference to Thursday; that would be fine for us.’ The Chief was still not persuaded. Do you know what persuaded him?” she asked, looking right at me. “I explained to him that lawyers wait their entire career to appear before the Supreme Court. For many of them, it is a once in a lifetime chance to argue in the Supreme Court. What if a Jewish lawyer wanted to appear in court? We should not make that lawyer choose between observing his or her faith and appearing before the Court. That persuaded him and we changed the calendar.”

Justice Ginsburg did more than just change the Court’s calendar.

Another important part of Justice Ginsburg’s act was that the argument that persuaded the Chief Justice was not based on the needs of a specific lawyer who was arguing a specific case or even a specific Jewish Justice who would otherwise have to be seated for the case. It was an argument on behalf of all Jewish lawyers who then existed or may exist in the future; it was an argument based on the possibility that there might be a Jewish lawyer at some point in time who would need to appear before the Court and not be comfortable choosing between his or her faith and the pinnacle of a legal career. Therefore, the 2003 official precedent was set that even the storied “First Monday in October” could be set aside for a higher purpose.

The next day, I was invited to attend a legal award program in Washington, D.C. Unbeknownst to me, Justice Ginsburg was a featured speaker.

At the post-event reception, a small crowd formed around Justice Ginsburg, hoping to take “selfies” with her. I stepped up to the front of the line just to thank Justice Ginsburg for having shared her story with me back in September. I told her that it was a great inspiration for the students and it was very well- received. She remembered telling me the story and was grateful to hear that the students appreciated hearing it.

One of her biographers was standing nearby, heard me talking, and asked me about the story. I explained the story and the biographer asked if I had it in writing. In fact, I had written up the entire story as part of my graduation speech and I shared the speech with her on Tuesday, May 23. She immediately shared it with Justice Ginsburg. On Wednesday, May 24, I received the following email from Justice Ginsburg whose words provide a fitting postscript to the story:

Thanks for sharing with me your May 21 graduation remarks. You told of the settlement of the “Yom Kippur controversy” with admirable accuracy. Glad you found it a useful illustration that people of good will can accommodate sincerely held religious beliefs without undue disturbance of other interests.

With appreciation, and every good wish,

May her memory be for a blessing.