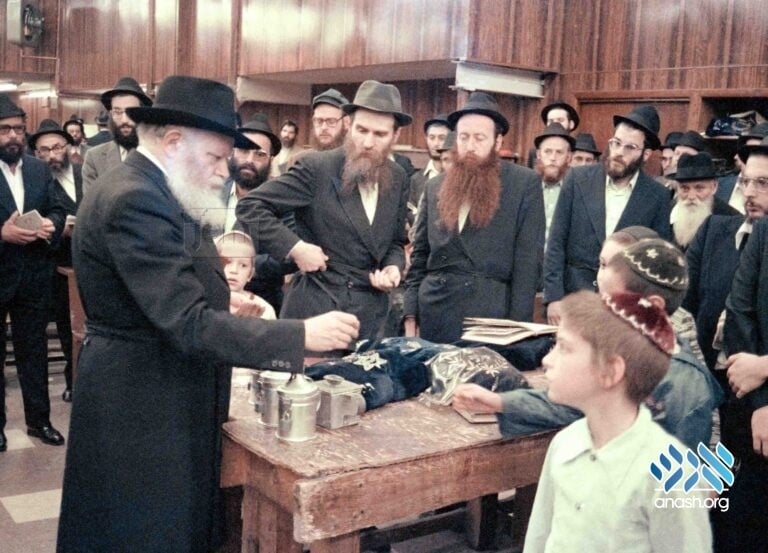 What began as a critique of mivtzoim, turned into an emotional yechidus about the fate of the Holocaust children. At the end, Antwerp’s Harav Eliyohu Shternbuch then borrowed the Rebbe’s pen and paper to write a kvittel.

“I want to ask about the mivtzoyim,” said Harav Eliyohu Shternbuch, the late Av Beis Din of Antwerp, after a lengthy Talmudic discussion with the Rebbe. The Rebbe consented and leaned forward slightly with an attentive expression.

“The Chasam Sofer established an attitude of separation from the secularists, so why should one interact with them?”

“A clear distinction must be made between the maskilim who sought to lure others and today’s ignorant masses,” the Rebbe responded. “In America alone, there are millions of Yidden, and less than half a million are observant. I racked my brain for a way to be mekarev them, until an idea came to me: the Torah rules that the performance of one mitzva brings another, so I, therefore, began a campaign to get a Yid to do a mitzva, and Hashem will then do His part. I am constantly looking for more ways…”

Suddenly a pained expression appeared on the Rebbe’s face, and he began talking of a monastery in Wallonia, Belgium. “Do you know that there are Yidden there who were hidden as children during the Holocaust?”

When Harav Shternbuch said that he hadn’t heard of that place, the Rebbe mentioned another monastery by name. “Yidden are being ordained as priests Rachmana litzlan – who is doing anything about it? The parents were murdered, and their dear son is entrapped in a church!”

After the Rebbe concluded with practical guidance on the issue, Harav Shternbuch, overcome with emotion, asked the Rebbe if he could write a kvitel. The Rebbe gave him a piece of paper and lent him a pen, and from then on became the address for the rov’s questions on personal and communal matters.