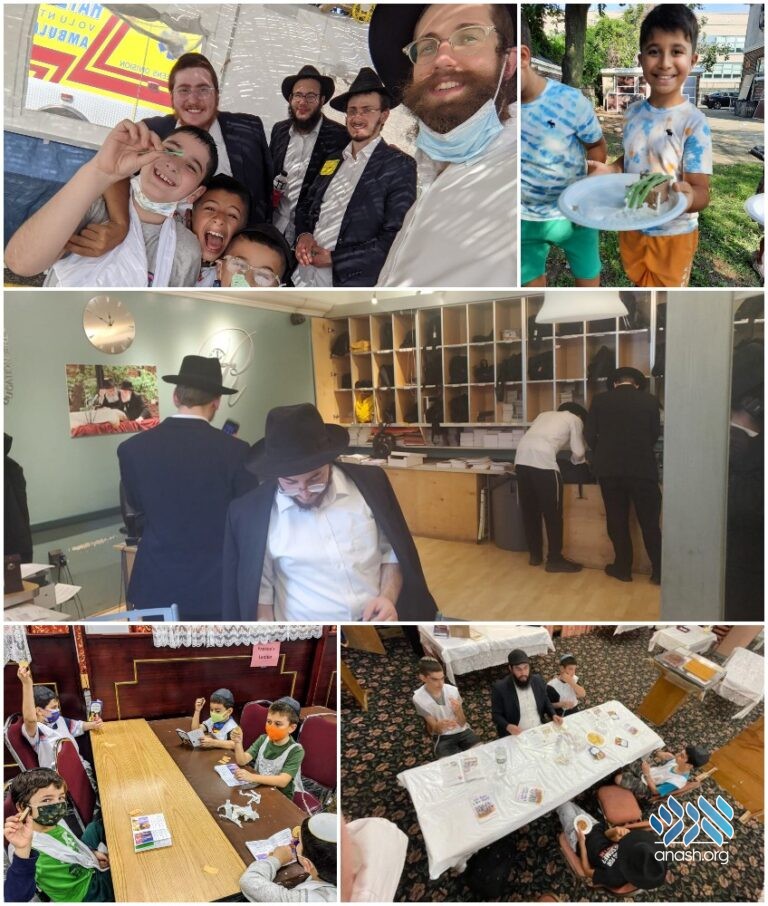 Article by Rabbi Sholom Dovber Avtzon: We all enjoy reading stories of mesiras nefesh from generations past. But one event that took place this past week, right here in Crown Heights can serve as a living example.

We all enjoy reading or hearing a story of self-sacrifice. Normally we anticipate that it will be about great individuals of yesteryear. But I would like to share with you about something that is happening nowadays that impressed me, and I decided to share it with you. Hopefully it will motivate all of us.

We all have our schedules and not always do we have an extra few hours to do a favor for another, especially when it is erev Yom Tov. But this week, on erev Yom Kippur when every store and office closed early, there was one office that remained open and closed around five in the afternoon; just two hours before Yom Kippur.

I am speaking in admiration of the hundred or so bochurim and some married men who work for Release Time.

Erev Yom Kippur, at around one in the afternoon (or shortly afterwards) we all eat the first seudah (meal) before mincha and shortly after mincha we eat the second meal. However, at around twelve-thirty in the afternoon, these young men who volunteered to be instructors in the Release Time Program (Wednesday Hour) for Jewish children in public schools, came into the office to receive their supplies and the list of Jewish children who signed up to attend the Release Time program.

Then off they went to their designated public schools in the five boroughs of New York to teach the children about Yom Kippur, and other points of Judaism.

Some classes were with twenty children, while other classes had only a handful of children, but you wouldn’t notice a difference on the faces of the instructors. Each one had a passion to reach out to another Jew, and inform him or her about our golden heritage. To them the saying of our sages, “Whoever saves a single Jew, is like he saved the entire world,” applies to each and every one of their charges.

When they had time to eat the first meal and go to the mikva before mincha, I don’t know. I suppose the first meal was in the car ride on their way to their designated school, as they were there by one thirty, in order to greet the students at two. After teaching them for an hour about Judaism, they bring them back to their school, and then the instructors come back to Crown Heights between three thirty and four.

So tell me, who has an extra three hours on erev yom kippur to help out another Jew.

But it isn’t just erev Yom Kippur that they demonstrate this greatness. In a week and a half is Simchas Torah. On the eve of Simchas Torah most bochurim in Lubavitch and a large amount of yungeleit, go on a tahalucha (a walk from Crown Heights) to other Jewish neighborhoods to enhance the joy and dancing in many shuls. Some walk to closer shuls and others to shuls ten miles away. Then they dance hakafos in the Rebbe’s shul throughout (most) of the night.

Early Simchas Torah in the morning these instructors will be getting up early to daven and then walk to their public school, since it is a Wednesday, and make sure to be there by one thirty in the afternoon to take the children to the shul to dance with a Torah. Yes it takes some of them three hours to walk one way, but what won’t they do to inspire another Jew. So they are finished with davening and hakafos at ten-thirty in the morning.

Bochurim, you are not only an inspiration to the boys and girls in your class, but to all of us. Your ahavas Yisroel and dedication to a takanah of the Rebbe is noteworthy. Chazak V’emetz.

While we are mentioning people who gave of their time to help others, we should also note the ten men that assisted CHAMAH AND gave over five hours of their time on Tuesday evening to distribute food to over seven hundred families.