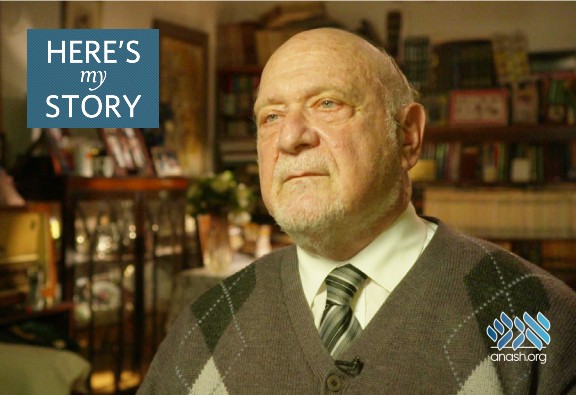 Over the course of his rabbinic career, Rabbi Michoel Kanterovitz served Jewish communities in Canada, England and Australia. But it was the Rebbe who got him his first rabbinic post.

Rabbi Michoel Kanterovitz served in rabbinical positions in Canada, England and Australia. He was interviewed in his home in Jerusalem in March of 2011.

Although I was raised in a secular home in Tel Aviv, already as a child, Chasidic teachings captured my imagination.

As a teen, I was sent by my widowed mother to an agricultural school in Kfar Silver, near Ashkelon. I was the only one among 400 students who wore a kippah, and I would stand in the dining hall every Friday night, sing Lecha Dodi and make Kiddush for all the others.

At one point, I managed to convince one of the American tourists who came to visit the school to donate a Torah scroll, and I arranged a festive Hachnasat Sefer Torah ceremony complete with a parade. The school’s administration provided a room where we built an ark to house the Torah and, on Shabbat mornings, I would wake up the Sephardic students who came from traditional homes so we could make a minyan and participate in a prayer service, complete with a Torah reading.

It was also at this time — in 1958 when I was fifteen — that my connection to the Rebbe began. I felt I needed guidance, and when I heard about his reputation of caring for every Jew, I wrote to him for advice. I described the unique situation in which I found myself and I asked: “Since I live in a place where Torah is not practiced, and I myself know little, how should I behave in this environment?”

The Rebbe wrote back — which in itself shocked me, because I did not expect a response — saying that what I was doing was a great mitzvah and encouraging me to continue spreading Judaism among my peers. This was more than fifty years ago, so I do not remember his exact words, but I can testify that his advice had a tremendous impact on me. It has been my guiding light from that day forward.

In 1962, I finished my studies and joined the IDF. I served in the military rabbinate as an assistant to Rabbi Shlomo Goren, then the chief rabbi of the Israeli forces. For three years, he and his deputy, Rabbi Yehuda Shulman, were my study partners. This is how I gained the Torah knowledge I was missing due to a lack of formal yeshivah education.

After my military service, I met my future wife, Malka, who was visiting Israel as an exchange student from Canada. Her father, Avraham Dovid Dalfen, who was close to Chabad, sent word to the Rebbe about our wedding and set up an audience for me to receive the Rebbe’s blessings.

During that meeting, the Rebbe asked me many questions. He remembered my involvement in Kfar Silver; he asked me about that and I told him about everything I accomplished there. Then he asked me about my service in the IDF, and I filled him in on my relationship with Rabbi Goren.

His questions were pointed and detailed, and I gave detailed answers. After more than a quarter of an hour, the audience came to an end and I began to back out. Suddenly I remembered that I had forgotten to ask him whether my wife and I should stay in Montreal after the wedding or return to Israel?

The Rebbe looked at me with his penetrating eyes and said, “Let’s see about that next year.”

I was not sure what to do with that answer and when I came back to Montreal my wife and I continued to deliberate where we should reside. But just one week after my meeting with the Rebbe, I got a phone call from Mr. Paul Cooper, who identified himself as the president of the Shaar Shamayim congregation in Thunder Bay, Ontario, Canada. He told me that the community had 120 Jewish families and that the Hebrew school which met in the afternoons has forty students, but no rabbi was willing to come there because there was no proper school for the rabbi’s children. “We received your information from Yeshiva University, and we understand that you are a young couple without kids, so you must come to us!”

I had no idea how Yeshiva University heard about me but I said to my wife, “This must be what the Rebbe had in mind. Obviously the Rebbe was sizing me up to see if I could be sent to a far-off Jewish community to spread Yiddishkeit there.”

I later learned that, after our meeting, the Rebbe’s secretariat informed the office of Yeshiva University in charge of appointing community rabbis that I would be a good candidate. I was asked to come to New York, where I was tested and received rabbinic ordination, and then I served as the rabbi in Thunder Bay for five years.

This is how my career in the rabbinate got started.

Subsequently, as my children grew and required schooling that was not available in the area, I moved on to become a rabbi in Leeds, England. After some years, I felt I had to move again for the sake of my children. I wrote to the Rebbe and received a reply: “Gedolah erkah uzechutah derabanut — The value and merit of therabbinate is great.” As a result of that letter, I stayed in Leeds for four additional years — one year for each word in the Rebbe’s letter.

The Rebbe was a guiding light in my life, and he is the one who sent me on my first assignment to a faraway Jewish community to spread Torah and Yiddishkeit. I hope and pray that the tremendous undertaking that he began so many years ago will continue to grow by leaps and bounds.