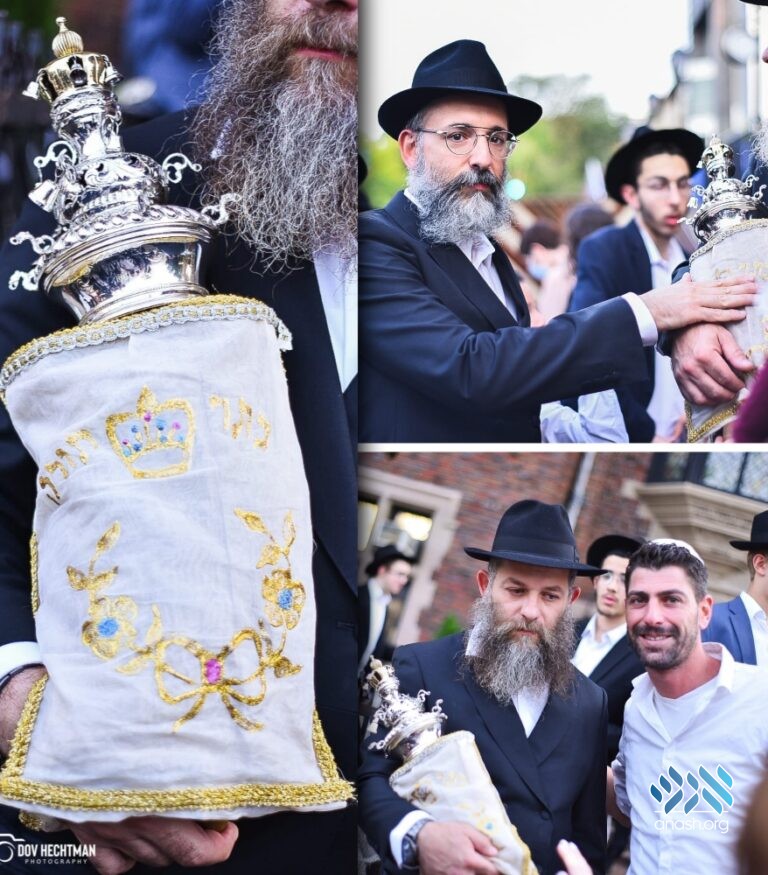 A short while before Shemini Atzeres, the unique Sefer Torah known as “The Rebbe’s Torah” was brought out of 770 to give people a chance to kiss it. Anash.org photographer Dovber Hechtman captured a few powerful moments in the minutes before Yom Tov.

A short while before Shemini Atzeres, the unique Sefer Torah known as “The Rebbe‘s Torah” was brought out of 770 to give people a chance to kiss it.

The Rebbe’s Sefer Torah, a small Sefer Torah originally known as the Slavita Sefer Torah, once belonged to the Schapiro brothers, chassidic printers in the town of Slavita, known for printing the first edition of the Tanya.

They were falsely accused of murder and arrested by the czarist police in 1839. After being forced to run the gauntlet, they were held first in prison and later under house arrest for 17 years. While they were detained, this was the Torah they used.

The family of Reb Shmuel Abba Schapiro, their descendants, recovered the Torah from the Communists, and when they fled to Eretz Yisroel, the Torah was one of the only possessions they took with them.

In 1954, Reb Shmuel Abba Schapiro wished to sell the Torah to the Rebbe, since he felt that such a holy and special Torah should belong to one of great stature. Upon hearing this, Rabbi Moshe Ashkenazi, Rov of Tel Aviv, purchased it for the Rebbe.

The Rebbe received the Torah shortly afterwards, and treasured it, using it for Krias Hatorah and hakafos for decades. Many chassidim remember the Rebbe’s motions during hakafos, waving the Torah back and forth in all directions, encouraging the singing of the crowd.

Although usually kept in a special locked section of 770’s Aron Kodesh, on Simchas Torah the Torah is brought out, and times are assigned for men, women and children to kiss the special and unique Torah.

A short while before Shemini Atzeres began, the Torah was brought out for women and children to kiss. In the short minutes before Yom Tov began, Anash.org photographer Dovber Hechtman managed to capture a few powerful moments.