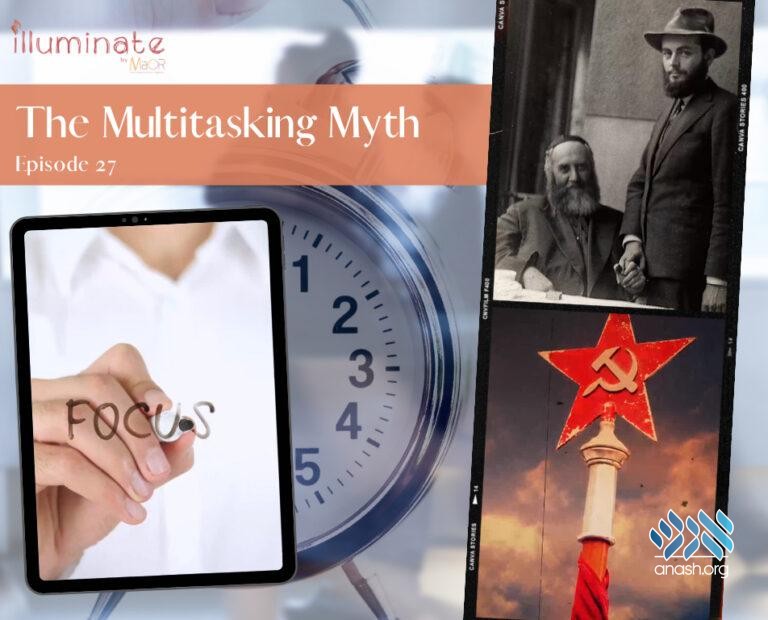 When Chassidim at a farbrengen were weary about missing their flight, the Rebbe addressed the key to successful time management, based on a story of the Frierdiker Rebbe.

Take a look at what you have in front of you at the moment. You are likely in the middle of a couple of tasks, aside from scanning through this article. You are asking your brain to split it’s attention. You may even consider yourself a pro at multitasking.

Employers, neuro-specialists, and professors wonder: Is tackling multiple duties at once really efficient?

In honor of Yud Shevat, 1970, a group of Chassidim flew in from Eretz Yisroel to be with the Rebbe. They sat in 770 at a special farewell farbrengen a few hours before their scheduled departure back home. The clock was ticking, and the Rebbe was speaking. Many of the visitors felt nervous about their upcoming flight and found themselves glancing at the clock.

The Rebbe noticed the anxious faces and suddenly began describing an experience that had taken place around forty years prior with his father-in-law, the Frierdiker Rebbe.

The Frierdiker Rebbe was scheduled to take a trip from Leningrad to Moscow. This mission was pivotal for Russian Jewry. As a prime suspect of the Soviet authorities, his upcoming journey was fraught with great danger.

A short time before the scheduled train ride, the Rebbe entered his father-in-law’s room. He found him deeply involved in a communal endeavor that required utmost concentration. The Frierdiker Rebbe was completely calm with no sign of apprehension about his impending departure.

His son-in- law was surprised. How is it possible to remain so calm and concentrated before such a dangerous excursion? The Frierdiker Rebbe answered with the secret to successful time management: Live in the present moment. The Secret Police may be waiting outside the door, but right now, there is work to be done.

The great sage, the Rashba, found time to fit a daily stroll into his busy schedule as rabbi, teacher, community leader and doctor. He was focused on each of his activities as if nothing else existed, and the productivity of his minutes and hours was maximized.

Single-tasking is the optimal strategy to utilize each moment to the fullest. Find out how much you can accomplish if you shelve multitasking.

Illuminate by Maor offers powerful presentations of the Rebbe’s timeless talks, fused with engaging narration and explanation. These weekly videos are bite-sized and simple to grasp, designed for learners of all levels.