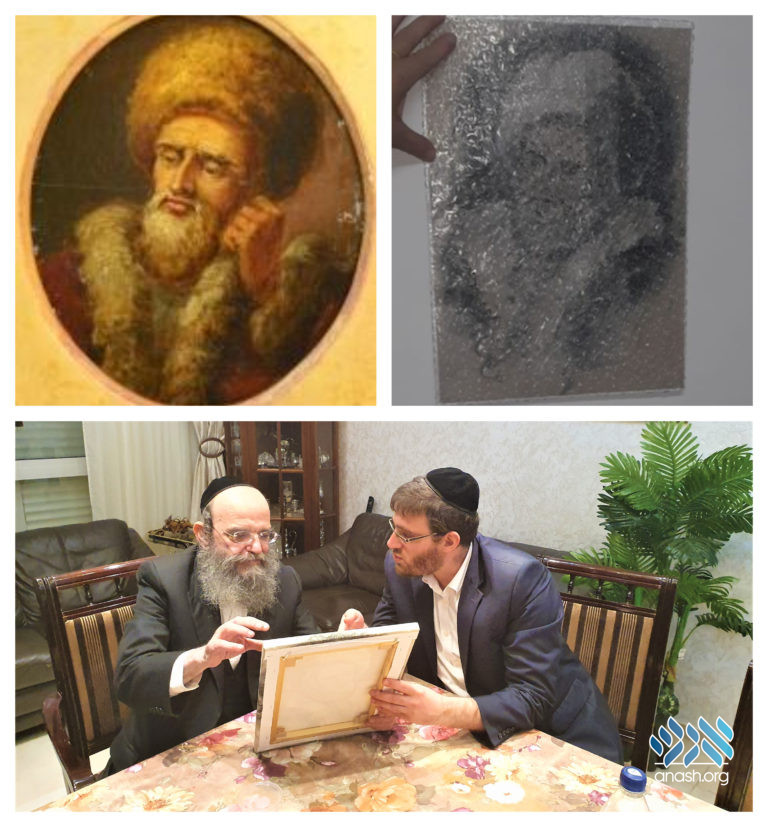 By Chaim Friedlander for Ami Magazine

It has been 169 years since the passing of Rav Yisrael Friedman of Ruzhin, great-grandson of the Maggid of Mezritch and founder of the Ruzhiner chasidus and all of its offshoots. Throughout the years, his chasidim have searched for some sort of hint of a portrait of him. Some said that his portrait had never been painted, while others said that because the Rebbe had been imprisoned in Russia there had to have been a portrait of him hiding somewhere in the historic Russian prison cellars as was necessitated by law. However, even if such a portrait existed, it has never been found.

About five years ago, a Chabad shliach found a portrait in the Ukrainian archives that said, “Rabbi Yisrael Friedman.” The date on the portrait, 1840, also matched up with the lifetime of the Rebbe. The portrait was purchased by the well-known philanthropist Reb Avraham Halperin, z”l, who collected many rare and expensive Judaica items for his private collection over the years. However, there were some who cast doubt on its reliability due to a number of questions that arose regarding how the portrait ended up in the Ukrainian archive.

Another doubt was raised by one of the Ruzhiner Rebbes regarding the position of the Rebbe’s left hand, which in the portrait was placed on his cheek. That Rebbe said that not a single Rebbe of Ruzhin had ever sat like that, and it was therefore hard to believe that the Ruzhiner did so.

This week, Yitzchak Feldman, a journalist for Bakehillah, revealed that another portrait of the Holy Ruzhiner has been found. The portrait was found through a chance meeting between an elderly German Jew named Naftali Norman Cherkes and Reb Zelig Leib Klein, a Boyaner chasid, who has been traveling to Berlin very often over the last few years for medical askanus.

“Across from the hotel where I stayed,” says Reb Zelig Leib, “there was a geriatric hospital. Apparently Norman recognized my chasidishe levush, and he called to me and said in Yiddish, ‘Reb Yid, come here.’ He told me that he had been born in Galicia to a family of chasidim of Husiatin nearly 90 years ago. During World War II he escaped to Russia, and when he returned home after the war he discovered that his entire family had been killed, so he moved to Kremnitz, Germany. We exchanged phone numbers and continued on our ways.

The next time I went to Berlin we arranged to meet, and during the conversation he casually said, ‘I have a portrait of the heilige Ruzhiner.’ I didn’t believe him, so I asked him where he got it from. He said, ‘When I returned home after the war, I met one of my uncles who had survived, and he gave me this portrait. He said that his grandfather’s brother had been at a chasunah in which the Rebbe had participated, and since he was an artist he sketched the Rebbe’s portrait in a matter of minutes using a thick pencil.’

“We agreed that the next time we would meet he would bring the portrait along with him, but somehow he would forget every time, and I began to wonder if it was true. But finally he brought the portrait to one of our meetings. It was wrapped in the pages of an old German newspaper that was over a hundred years old. Shockingly, he handed me the portrait and insisted that I should take it.”

Rabbi Klein then took the portrait to the Boyaner Rebbe, but the Rebbe said that he didn’t want to see it until Rabbi Klein would verify the picture. Over the course of two years, the best experts investigated the portrait, and their findings were unequivocal. They found, for example, that the company that made the sketchbook in which the portrait had been sketched went out of business 147 years ago. Further investigation showed that the portrait had been made hastily and without much preparation, and only the background around the Rebbe’s face had been drawn later and with much more patience. The portrait is also very similar to the one that was owned by Rabbi Halperin. Further investigation served to confirm the sketch, and on Erev Sukkos Rabbi Klein visited the Boyaner Rebbe and brought a copy of the portrait.

Meanwhile, a Judaica collector who heard about it decided to purchase it for a large sum on condition that copies of the picture wouldn’t be disseminated for five years. For that reason we can’t publish a clear version of the picture; we can only show it completely blurred out. And what about in five years from now? Hopefully by then, b’ezras Hashem, we will merit to the see face of the Holy Ruzhiner in real life.