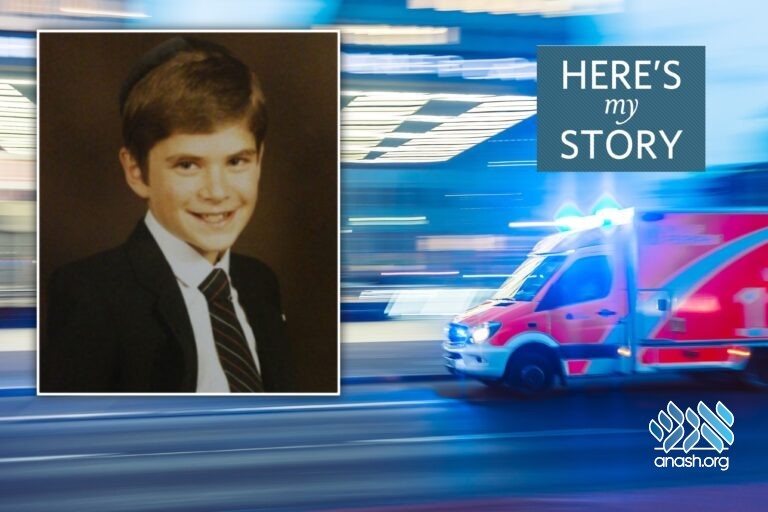 When a young Uriel Ash was hit by a car while riding his bike, his doctors gave him no chance of survival. His parents immediately called the Rebbe who had a specific message for the doctor.

Mrs. Estie Ash has been an active member of the Chabad community of Johannesburg, South Africa, since its inception. She was interviewed in Johannesburg in August of 2014. Dr. Reuven Jacks, Deputy Director of Trauma Services at the Johannesburg Hospital, was also interviewed to corroborate this story.

It was my first time back in the States since getting married. While my husband Michael stayed home in South Africa, I traveled with our boys, Eitan and Uriel, for a nephew’s Bar Mitzvah. Of course, we also went to have an audience with the Rebbe.

My mother’s family had been affiliated with Chabad for generations, and, although we didn’t keep all the customs, she wouldn’t budge without first consulting the Rebbe: If anyone was sick, or getting married, or whatever, she would make an appointment. The Rebbe was very much a part of our lives when we were growing up.

We went to Crown Heights for Shavuot, but when we got there, I found out that the night before, the Rebbe had given out these beautiful, brown prayer books to all of the kids. Upset that we had missed out, I spent the whole holiday thinking about how I could get two of those siddurim for my children.

Our audience was at 11 PM, right after Shavuot of 1979. Eitan was just three years old and had fallen asleep, so I was holding him in my hands. Uriel, who was six, walked alongside me. The Rebbe greeted us very warmly; he looked at my children like they were his own grandchildren.

But before we had a chance to say anything, the Rebbe asked Uriel, “Do you have a siddur?”

“I do have a siddur,” Uriel clarified, “but I don’t have one like the other children.”

“What do you think we could do to rectify that situation?” the Rebbe said with a smile, before calling in Rabbi Groner, his secretary, and requesting two siddurim. He gave me the one for Eitan, and gave Uriel the other. When Uriel put his left hand out to take it, the Rebbe corrected him: “You must always do mitzvot with your right hand.”

We only had five minutes for our audience so I had written a full letter to the Rebbe, and had submitted it through Rabbi Groner in advance.

After his exchange with Uriel, the Rebbe started to give me all the blessings I had requested: For the family, for good health, and for the boys to grow up to become Torah scholars. Seven years later, those blessings would be at the front of my mind.

It was just a week or so away from Uriel’s fourteenth birthday. My kids were all avid bicycle riders, and I was crazy about them wearing helmets, but one day Uriel had to go just up the road and didn’t put one on.

It was a very narrow street, with cars parked on both sides, and Uriel ended up getting hit by a car. He flew off his bike, over the hood of the car, and smashed through the windshield with his head, before rolling off onto the ground and having his hand run over.

There was blood coming out of his nose and his ear, and he was unconscious. While I was sitting there in the street with Uriel, waiting for the ambulance, I had this clear sense that his fate was in G-d’s hands. I began asking the paramedics questions, but I couldn’t even follow what they were saying. All I could think was, please G-d, let him live!

When we got to the hospital, they had me fill out some forms while they tried to resuscitate Uriel. He was only thirteen at the time, but on the form, I wrote down that he was fourteen. His birthday was a week away, and I desperately needed him to at least reach that milestone; I needed that fourteen, so that’s what I wrote.

Then I sat there, praying to G-d. I remember thinking, the Rebbe blessed him to grow to be a Torah scholar: How can this be happening? He has to live!

The doctors asked me to talk to Uriel and hold his hand, to see if I would elicit a reaction, but he didn’t respond. When my husband came, we tried again, but still, nothing. Michael quickly realized the gravity of the situation and phoned Rabbi Mendel Lipskar, a close friend of ours, and he phoned the Rebbe’s office for a blessing.

When the doctors gave Uriel a CAT scan, they found that there was severe swelling of his brain. We were told that his brain was no longer functioning. His heart was still beating, but the swelling in the brain meant that it wasn’t getting oxygen. The head of the trauma unit, we later learned, had informed the intern on duty, a young Jewish doctor, that there was nothing to be done. “Don’t do anything,” were the instructions he gave before leaving him in charge.

The prognosis was so bad that Uriel couldn’t receive an ICU bed; there were other patients more likely to survive. The doctors were just going to leave Uriel there in the emergency room, without administering any active medical care, to let time take its course.

Meanwhile, I was in a room on my own, saying Tehillim. I didn’t want to know what the doctor said, and didn’t pay attention to what was going on. I just prayed and prayed and prayed. At one stage, I felt a calmness come over me; a very strong feeling that Uriel was going to be fine.

And then we received the Rebbe’s message. The Rebbe said that he would pray for Uriel and wished us to have good news to share, but he also had a specific message for the doctor. The gist of it was this: A doctor is an agent of G-d to heal. His job is to administer treatment, and G-d will decide the outcome. But he should do whatever he can.

When Michael relayed this message to the doctor, something in it shook him. It was the very opposite of what his superiors had told him, but he decided to go against their instructions. He moved Uriel to a room in the pediatric ward, brought in a ventilator, intubated him, and began administering extra drugs, along with whatever medical treatment he could, attempting to save Uriel’s life.

Early the next morning, at about 5:30 AM, the doctor came back into the room as the sun was coming up. A ray of light came through the window and onto Uriel’s face, and as it did, he came to. He pulled himself up in bed, and then made a gesture to show that he wanted to do the morning ritual hand washing. It was like seeing his G-dly soul at work.

Uriel was soon fully conscious, and was home within a week. It took him about two years to recover, but after your child comes within an inch of death, you can wait. It was just amazing.

There was another G-dly soul impacted that night: Although the young doctor wasn’t very attached to his Judaism at the time, he felt that there was no medical explanation for what happened that night; it was a miracle. It was like he had one patient before the blessing and another one after.

A short time later, we invited him to our home for Shabbat, which inspired him to look into his roots. Eventually, he became more observant, and he now attends a Chabad synagogue in Cape Town. This story, he later said, was a turning point in his life.