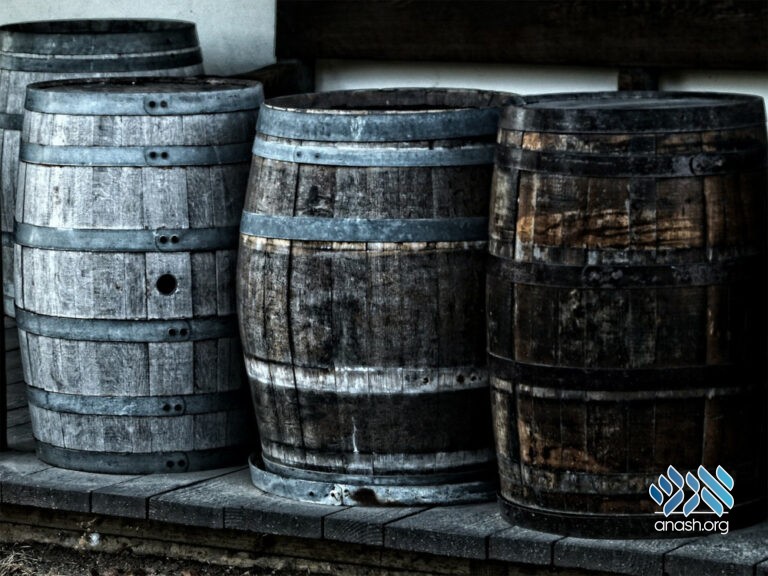 Motzei Shabbos Story: After saving up for many months, a young man from Prague hid his money bag in a barrel of wine. He nearly had it stolen, but the wisdom of the Noda B’Yehudah saved him from being robbed.

There was once a young man living in Prague who struggled to make a living. He eventually convinced his wife that he needed to leave home to seek his fortune elsewhere. He explained that after he made a nice sum of money, he would return home to establish a business.

The young man traveled to another town, and kept in touch with his family. But after a while, he stopped communicating. Eventually, his family began to give up on ever seeing him again—they assumed something must have happened to him.

A wine merchant from Prague, who traveled to the countryside every year to purchase kosher wine at wholesale prices, happened to travel to the place where the young man was living. Arriving at the local winemaker’s shop, he encountered the young man himself. He invited him to sit down and talk, and convinced him to come back home. After the young man agreed, the merchant offered him a ride in his wagon, which by then was filled with the wine he had purchased.

The young man had a bundle of money he had amassed throughout his years away. He began to worry that the merchant’s workers may notice and try to steal it, so he hung the bundle from his neck with the bulge under the back of his shirt. After a while, however, he grew worried about this arrangement too. So when no one was looking, he broke the seal on one of the wine barrels, lowered his bundle into it, and then closed the barrel. Finally, he could relax.

When they arrived in Prague, the businessman said to the young man: “Before I drive you home, let me first drop off the wine at my storage facility.” As the barrels were unloaded, the young man tried to keep track of the barrel with his money so that he could return later to retrieve it.

But as he watched the barrels being unloaded, he saw that every single one of them was sealed. He couldn’t locate the barrel in which he had hidden his money. So he approached the businessman and told him what he had done. “Where is my money now?” he asked. “I see that all the barrels are now sealed.” The businessman became visibly agitated, and said, “How dare you suspect me. I’m sorry but I don’t know where your money is.”

The young man was understandably devastated. He had worked for years to earn this money, and it was the reason he had been separated from his family for all this time. He went off to the chief rabbi of the city, Rabbi Yechezkel Landau (1713-1793), known as the “Noda B’Yehudah,” and asked for his help. The rabbi agreed to summon the businessman and question him.

Immediately after the questioning began, the businessman again became enraged, and started shouting, “How could this be? I did this man a favor! He should thank me for what I did for him —now he’s turning around and accusing me of theft?!”

The Noda B’Yehudah was aware of the Talmudic passage which states that there are three ways through which one’s true character can be known: By the cup (how one acts when they have been drinking), the pocket (how one spends their money) and by anger (how they react to adversity and confrontation).

Realizing that the businessman’s quickness to anger revealed strong feelings of guilt, he advised: “If it was not you who took the money and resealed the barrel, then it must have been one of your non-Jewish workers. If a gentile touches unsealed wine, the wine is no longer kosher. Since we do not know which barrel it was, I must reluctantly rule that all of your wine is non-kosher, and may not be sold to Jews.”

Realizing that he stood to lose many more times than the sum he had stolen, the merchant admitted his guilt. “It wasn’t the gentiles!” he cried. “I myself have taken the money from this man. It is I who am guilty.”

The rabbi instructed him to return the money and beg the young man for forgiveness. He also told him how to do teshuvah for what he had done. From then on, he became a righteous man.