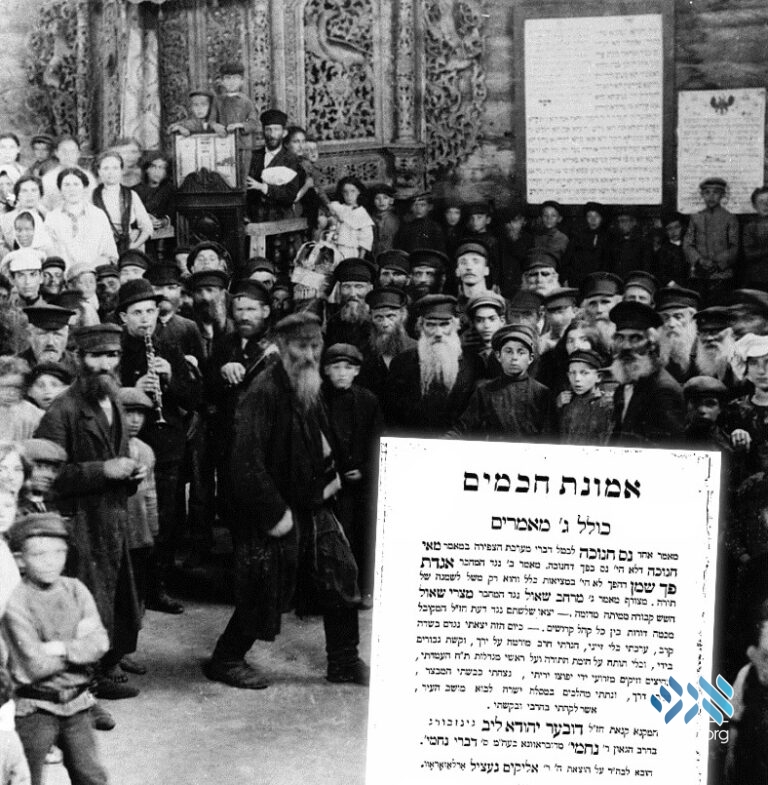 The polemical publication over a photo of a Dubrovna shul.

After certain maskilim denied the Chanukah miracle and brought “proof” for this from the Mitteler Rebbe’s maamar, R. Bere Leib Ginzburg published a fierce response objecting to their false claim and distortion of Chassidus.

R. Dov Ber Yehudah Leib Ginzburg (c. 5590-5654) was born in Dubravna, to his father, the famous gaon and chossid R. Nechemia, the author of Divrei Nechemia. R. Bere Leib was a chossid of the Tzemach Tzedek, and later of the Rebbes of Kopust.

A resident of Mogilev, R. Bere Leib was a wealthy businessman and a talmid chacham with broad knowledge in all areas of Torah, including nigleh, Chassidus, and chakirah, and he used his knowledge to counter the maskilim in the contemporary press. He was a prominent community leader, and often served as a representative for his Rebbe, Harav Shlomo Zalman of Kopust, regarding communal affairs.

R. Bere Leib published his father’s seforim Divrei Nechemia, which include some of his own notes and chidushim, as well as Emunas Chachamim, a refutation of maskilic attacks on the miracle of Chanukah.

In 5652, a controversy erupted in the Jewish world when a maskil published an article in a Hebrew newspaper denying the Chanukah miracle with the menorah oil RL, and even ascribing this position to the Rambam.

One of this maskil’s supporters then published a pamphlet advocating this position by taking derush and kabbalah explanations of the neis out of context and claiming that these gedolei Yisroel didn’t believe in the miracle in the literal sense. Quoting the Mitteler Rebbe’s explanation in Shaarei Orah that the oil represents the divine chochmah of the Torah, he twisted this to mean that the Mitteler Rebbe denies the actual neis!

The Kopuster Rebbe, Harav Shlomo Zalman, turned to R. Bere Leib and asked him to publish a rebuttal to these absurd claims. R. Bere Leib wrote a kuntres titled “Emunas Chachamim” which was funded and published by Chabad Chassidim, led by R. Elyakim Getzel Arlozorov, a Rosh Yeshivah in Rogatchov. Two thousand copies of the kuntres –a significant number for that time – were distributed for free across Eastern Europe.

In Emunas Chachamim, R. Bere Leib used his broad knowledge in all areas of Torah to dismiss the maskilim’s arguments and prove that the Chanukah miracle was of course universally accepted by all gedolei Yisrael in its literal sense.

The maskilim were enraged by R. Bere Leib’s refutation of their position, and took revenge by continually mocking him in the press. But R. Bere Leib stood firm, and continued to fight for the authentic Torah position.