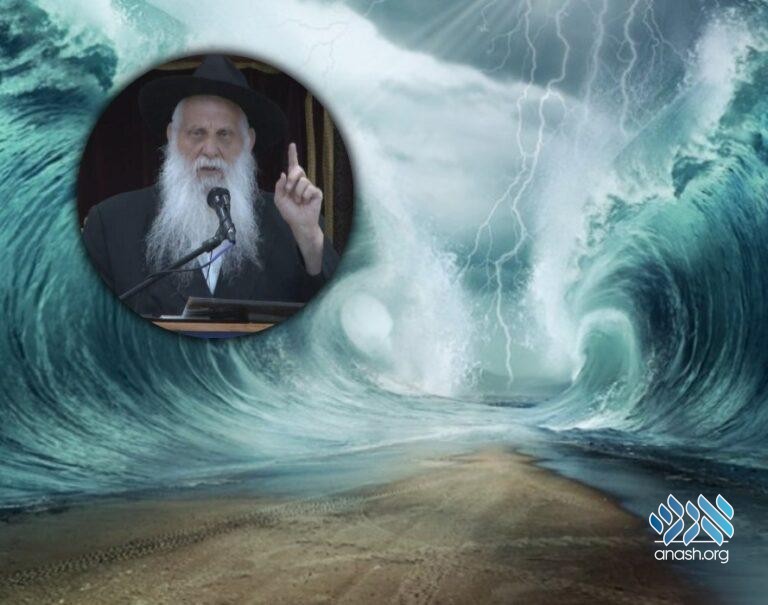 D’var Torah by Harav Shimon Raichik: The story of how Moshe Rabeinu took the bones of Yosef Hatzadik through the desert, and how he fought against Amalek, teaches us a lesson for our times.

By Harav Shimon Raichik – Rov of Anash in Los Angeles

In this week’s parsha the Torah states that Moshe Rabbeinu took the bones of Yosef HaTzaddik with the Bnei Yisroel as they left Mitzrayim. It seems that the proper place to mention this would be in last week’s parsha, Bo when the Exodus is discussed. Why is it mentioned here in parshas Beshalach which speaks of the travel of the Jewish people in the midbar, the desert?

Because of the reference to Yosef HaTzaddik seeming out of sequence, the Rebbe asks questions about what this teaches us in our daily lives. First, what does Moshe Rabbeu specifically and no one else being the one to take the bones of Yosef HaTzaddik’s out teach us? Secondly, what does placement in the Torah of this by their travels in the midbar teach us?

The answers come from one last  question; isn’t the term the “aron-coffin” of Yosef HaTzaddik a more appropriate and respectful term than “the bones”? The Rebbe explains that the word “atzmos-bones” in Hebrew means essence. (Just like by a person, their bones are their essential structure) When Moshe Rabbenu took the aron of Yosef HaTzaddik, he took his essence (bones) with them. Rachel Emeinu, when naming him Yosef explained the meaning of his name Yosef means to add, to add a Ben Acher-another son. The Tzemach Tzedek explained that Yosef had the power to take an individual who was ‘acher’ different, estranged from Hashem, and reveal in him his ability to be a ‘Ben-a child’ of Hashem. Passing through the desert, Moshe Rabbeinu strengthened each and every Jew, to overcome his mentality of servitude from Mitzrayim, and brought that person them to identify as a Ben to Hashem.

If the Yidden would have gone directly to Eretz Yisroel they would not have needed that extra strength. Since, however, they needed to traverse the desert; a place of scorpions and snakes, a place of spiritual danger there remained a possibility that someone may not be able to endure the prolonged challenge. For this reason Moshe Rabbeinu the leader of Klal Yisroel needed to take the bones, the essence of Yosef, to help and guide those individuals with the message of Yosef HaTzaddik. This is why it is mentioned in parshas Beshalach and not parshas Bo because they were going through the desert and not yet in Eretz Yisroel.

There is a connection between this and the end of the parsha which speaks about how Amalek waged war with the Jews. Moshe Rabbenu told Yehoshua to choose men and fight the war with Amalek. Why was Yehoshua chosen and no one else, after all he was not a leader at that time? The answer is that he was a descendant of Yosef HaTzaddik. What has his being a descendant have to do with fighting a war with Amalek? It is because Amalek targeted their war against the weak, those whom the Cloud of Glory, the Ananei HaKovod had rejected. They stood outside the protection of the Anan. The Ananei HaKovod rejected them because of their weakness in emunah.  Their emunah had become weakened and led to a cynical and skeptical attitude toward Hashem. They asked; is Hashem with us or not? This weakness in their emunah and the attitude that came from it caused them to become estranged ‘acher’ from the Jewish people and from Hashem. Therefore Moshe sent Yehoshua a descendant of Yosef who has the power to repatriate those in a state of ‘acher’  and susceptible to the influence of  Amalek to make them once again a Ben to Hashem and return them to camp and the protection of the Anan.

Even today in 2021 the yetzer hara  wants us to forsake these people who are susceptible and weak. The yetzer hara within asks us; what will one  mitzvah done just one time accomplish in the long run? There is no long-term benefit. It’s better for us to stay in our encampment, to focus on building within our insular communities and to ignore those that have been lost to the Anan of Hashem and its protection. This is the lesson that this story of Moshe Rabbenu and Yehoshua  teaches us today. It teaches us  that we have a responsibility to look out for each and every Jew including the most weak in their emunah and get them to do a mitzvah even if they are cynical or skeptical. It’s a matter of survival, it’s pikuach nefesh.

The way we can accomplish this and be successful is by being ‘Anshei Moshe’  connected to the Rebbe, the Moshe Rabbenu of our time. This connection gives us the strength  to pull in this neshama from outside of the Anan.  It could be just one mitzvah because a mitzvah is a connection to  Hashem. A mitzvah is a candle. That connection is eternal and starts the process of returning to Hashem. There are stories of thousands of Baali Teshuva  who began their entire journey back to the Torah and mitzvos with just one mitzvah.

My father, whose Yahrzeit was on the 8th of Shevat, escaped Europe in 1946. He lost his entire family to the Nazi’s, yemach shemam. A central purpose of his shlichus was to find Jews spread out in little towns all across America. He reached out to them and brought them back to being a Ben to Hashem. There are numerous stories about how my father had a great effect on others with just one mitzvah, often the mitzvah of tefillin. From their experience of a mitzvah during that one encounter they began a life of the Torah and mitzvos.

This is the mission of each and every one of us today and the way we finish our journey, this war of  galus  and usher in the era of Moshiach.