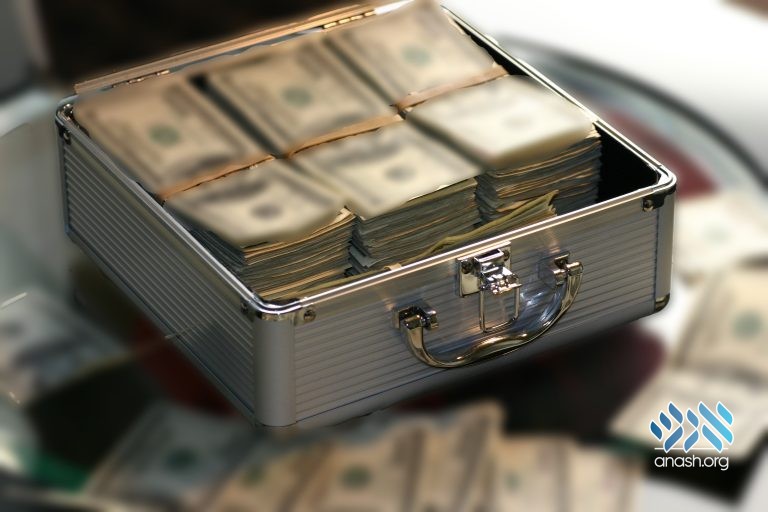 Motzei Shabbos Story: The chossid came crying to the Chozeh, not having the money to pay for his daughter’s wedding. The solution involved an innkeeper and an unexpected thief.

“Oh please help me, Rebbe,” beseeched the chassid, quietly blinking back tears. “My daughter is at last betrothed to a fine young man, but I haven’t even a glimmer of an idea of how I’ll be able to pay for the wedding.”

Rabbi Yaakov Yitzchak Horowitz, the Seer of Lublin, directed his eyes heavenward. “Your help lies in G‑d’s hands and nowhere else. Travel to such-and-such a town and book a room at the local inn. You should sit and study Torah there, and G‑d will deliver the necessary help.”

Doubts quieted, the chassid left the room, went home to pack a few essentials, and immediately began his journey to the specified town. The rabbi’s words buoyed his heart and spirit.

He found a Jewish-owned inn and checked into a room, perhaps indefinitely. Holed up all day studying, his lack of activity stirred the innkeeper’s curiosity. On one of his rare ventures through the foyer, the innkeeper detained him and politely asked about this behavior.

The chassid didn’t hide the intent of his stay and told the innkeeper all about the rebbe’s promise which he believed with all his heart. A friendship took root, and the two opened up more and more about their lives.

“I used to be a rich man, blessed with an abundance of wealth. Unfortunately, I lost it all in less than an hour, just after I returned home from the Leipzig fair 20 years ago.

“I had finished counting my earnings, arranging the bills and coins in neat, labeled stacks when a sudden errand demanded my attention and I left the safe unlocked and unattended. You can imagine my shock when I returned to find the empty box sitting on my desk.

“My head spun. This was all I had! The room looked exactly as I had left it, without a trace of forced entry. I suspected my servant and demanded that he confess, but when I saw his bewilderedness I had to abandon any further inquiry. I had no evidence and didn’t want to wrongly accuse anyone.

“Now this inn is my sole source of income, but I don’t complain,” he finished with a shrug.

As his stay progressed, the chassid also befriended a Torah teacher who lived on the premises. Known as a learned and good-natured man, the teacher had moved in years ago when the innkeeper hired him to teach his sons. Although the children had long outgrown his tutelage, the innkeeper allowed him to remain simply because he was a good friend.

On a day when particularly pleasant weather graced the county, the teacher and the chassid took a walk. Once the two were a considerable distance from the inn, the teacher motioned to a large boulder hidden in the privacy of the forest thicket. “Let’s rest here,” he suggested.

The two sat. The teacher sighed and turned to the chassid with a somber expression.

“I have an idea how you can get the money you need for your daughter’s wedding,” he confided with grim urgency, “but first you must promise you’ll do whatever I say.”

With another sigh, the teacher began his story:

“As you probably know, I arrived to teach the innkeeper’s sons many years ago. Five years into my tenure, I saw the innkeeper return from a fair in Leipzig laden with profits. He was in the middle of counting his money when he was suddenly summoned to the market. As he dashed out, he never noticed me standing there, consumed by temptation.

“I saw my chance and seized it. I am ashamed to say that I walked into his open room and stuffed all of his earnings into my pockets. Not a soul saw my theft.

“Almost immediately, I regretted my impulsive act, wanting nothing more than to return the money and confess. But despite the terrible gnawing of conscience, I couldn’t do it because I was terrified of the consequences. Even after the innkeeper discovered the theft and his wretched cries caused me to shudder to the bone, the money remained with me. I couldn’t bear the thought of people finding out that the ‘righteous’ and ‘G‑d fearing’ teacher took the money.

“Years have passed, and although a lot has changed, the money remains untouched, still bound and stamped. I have not dared to even look at it.”

The chassid met the teacher’s eyes and saw tears glinting in the sunlight.

“I beg you to return the money for me. Seeing as you’re a visitor from out of town, he would never suspect you to be the thief from so long ago.”

“I’m sure,” added the teacher, “that the innkeeper will charitably repay you for this.”

The chassid agreed and accompanied the teacher back home where he handed him the stolen money. Discreetly, the chassid brought the money to his room and waited for the right moment to present it to the innkeeper.

The next day, as the chassid sat in his room, swaying to the tune of his learning, a knock at the door stopped him mid-sentence.

It was the innkeeper. They conversed for several moments before the chassid said, “I was thinking about that story you told me. The one where you were robbed. Could you please tell it again?”

“With pleasure,” replied the innkeeper, who proceeded to retell the sad tale.

“I’m able to return that money—” said the chassid.

“Of course. Anything!” spluttered the innkeeper.

“You must not go looking for the thief. Understand?”

One by one, the chassid produced the wads of bills and coins and placed them into the innkeeper’s trembling hands. Eyes as wide as saucers, the innkeeper examined the neat packets.

“Incredible… the seals are still intact…”

The innkeeper burst into tears and embraced the chassid, sobbing into his shoulder.

“This must be a miracle of your Rebbe,” came the innkeeper’s muffled voice. “A chain of events to return what I lost…”

He straightened up, wiped his eyes, and proffered a bundle containing 1,000 rubles. “You certainly deserve this. Please, go and celebrate your daughter’s wedding without further worry.”