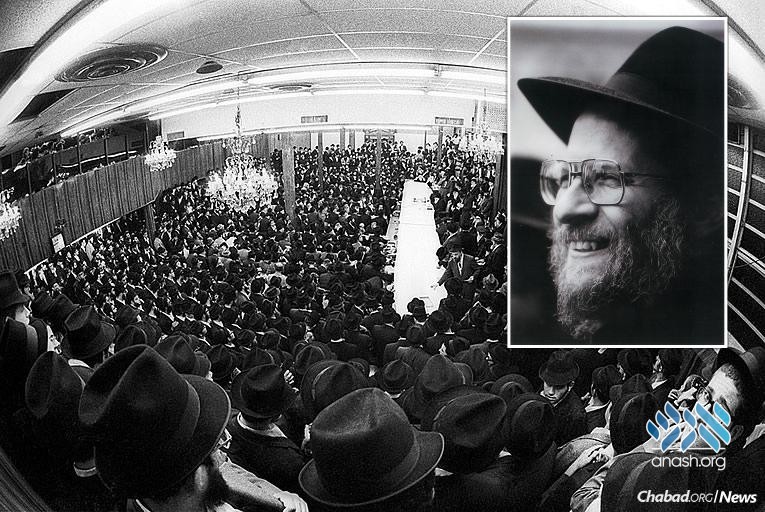 Op-Ed by Rabbi Mendy Deitsch: “During those moments all that mattered was having the immense privilege of standing and and singing in such close proximity to the Rebbe.”

By Rabbi Mendy Deitsch – Chabad of the East Valley, Chandler, AZ – for Anash.org

From a very young age my father would bring my brothers and I to 770 on Simchas Torah in order to be close to the Rebbe on this special day.

One year I had the privilege of pushing myself into the “Ches”, (it was more like a Shlus Mem, closed from all sides) The Ches was named as such because it was surrounded on all four sides with metal tables protecting the inner space and the low stage where the Rebbe would dance with the Torah, safe from the crush of chassidim that were singing and dancing in 770.

We children squeezed under the tables, with only our heads were peeking out to get a glimpse of the Rebbe as he majestically danced with the Sefer Torah. It was electrifying. The immense joy, the noise, the singing, the pushing and pressure each time the Rebbe danced another circle, held up the Torah and danced shoulder to shoulder with the Rashag.

The devotion of the Chassidim standing in the front row was a sight to behold. Their hips were crushed against the steel tables, and they were holding up against the huge amount of people behind them attempting to be in that same spot or to reach over and kiss the Rebbe’s Torah. Some would even come with pillows to ease the pressure.

The only way one emerged from hakofos was with a torn kapote and smashed hat. But who cared?! It was simply unimportant. At that moment all that mattered was having the immense privilege of standing and and singing in such close proximity to the Rebbe.

The image of one young chassid, who I later learned was Rabbi Fitzi Lipskier a”h, the magid shiur and Mashpia in Morristown, is ingrained in my mind and heart. There he stood, a tall, slim man in the front row right against the table, with hundreds of people behind him, pushing forward with nowhere to go. With ten people in a single spot, there was not even a inch to move. Yet when the Rebbe was dancing, one could see the joy radiating from his face, beet red, moving from side to side, shaking up and down, while singing the Hakafos Niggun on top of his lungs, focused, his eyes locked on each movement of the Rebbe, as if nothing else existed at that moment.

Everybody was simply stuck in place and moved with the rhythm of the throngs of people up and down, up and down. The only part of of our bodies that was not sandwiched between people was our heads, which we would shake with great enthusiasm. You were able see the pure joy, the rejoicing and unconditional happiness, just true delight, on being near the Rebbe, dancing, singing and gaining encouragement with each stroke of the Rebbe’s holy hand.

Today the joy continues when I dance at our Chabad center. The Yidden may not have ever been in 770, I may not be in 770. Yet the Rebbe gave me a gift to be able to dance with our fellow Jews standing shoulder to shoulder, holding the precious Torah, each person getting their chance to connect with the Torah. There is no question that the joy and rejoicing is here as in the Rebbes shul.

The privilege and honor to be able to say lechaim and sing and dance with a fellow Yid, the humble gift that the Rebbe gave us to appreciate and value the infinite worth of someone else, gives me the strength to dance like never before.

Even this year when less people will be coming due to the pandemic, the electrifying feeling that penetrated the walls and people in 770 is reverberating even stronger now in whichever shul we daven at or the place we will be celebrating. Ultimately, it’s the spirit of Yom tov, it is the life-giving energy that we capture at this time of year is not limited to a finite place but energizes us wherever we may be.

Let’s grab hold of that energy tap into that joy and greet the Rebbe with our dancing shoes on embracing one another with that simple pure unadulterated happiness – the joy of being a Jew.