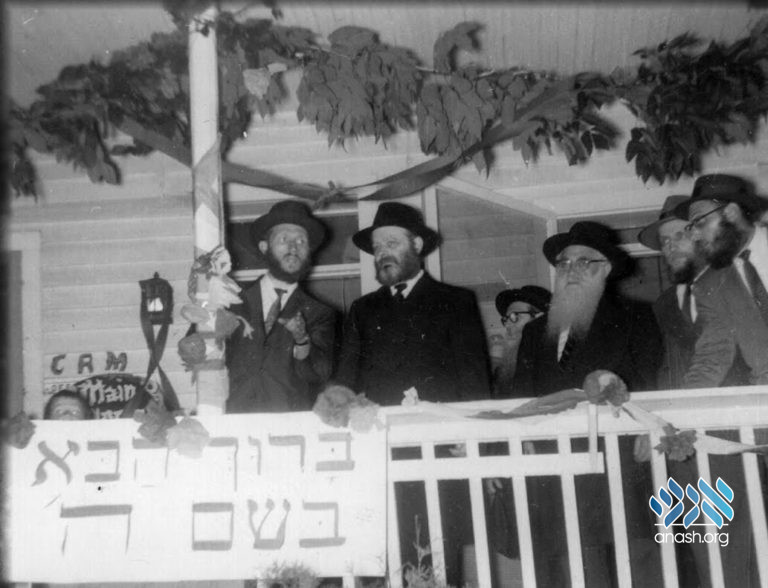 My father was Rabbi Yisroel Yitzchok Piekarski, who served as the rosh yeshivah — head of the central Chabad yeshivah at 770 Eastern Parkway in Brooklyn, for forty-two years, from 1951 until 1993.

This may be curious in and of itself, as we were not followers of the Lubavitcher Rebbe. My family were followers of the Amshinover Rebbe. I, myself, was enrolled as a student in the yeshivah of Chatam Sofer on the East Side of Manhattan, where the word “Lubavitch” didn’t usually come up.

In fact, I knew nothing about Lubavitch until the passing of the Previous Rebbe in 1950, when every newspaper in New York had a picture of his funeral on the front page.

Seeing this on every newsstand, I came to yeshivah and asked “Who is this? What is Lubavitch?”

Not getting an answer that satisfied me, I decided to ask my father. But I got nowhere with him either. I think this was because my father did not want me to have too much connection with Lubavitch because it contradicted the way he was brought up.

But then, some months after the Previous Rebbe’s passing in 1950, my father got a call from Rabbi Shmaryahu Gurary, the administrator of the Tomchei Temimim yeshivot, telling him that Lubavitch was looking for a rosh yeshivah and that he had come highly recommended by a number of people. (My father was considered a Talmudic prodigy from an early age and he had developed a reputation as a Torah genius.) Although he was reluctant at first, he took the job after several meetings with Rabbi Menachem Mendel Schneerson, who had succeeded his father-in-law as the seventh Rebbe.

I, myself, did not come to study in the Chabad yeshivah until 1952, when I left Chatam Sofer yeshivah. My life was forever changed as a result.

In 1956, while I was a student there, the first Lubavitch summer camp opened up on the initiative of my friend and classmate Moshe Lazar. I recall the day he burst into our study hall all excited. “I got the okay!” he exclaimed. And then he told us that the Rebbe had approved his idea of starting a summer camp in the Catskills — to be called Camp Gan Israel — which would be a religious camp geared to Jewish boys from all backgrounds.

I worked at Gan Israel for a total of five years, both when it was located in Ellenville, and later when it moved to Swan Lake. And I vividly remember when the Rebbe came to visit there in the summer of 1957.

It is a well-known fact that the Rebbe never left New York City, and it was highly unusual for the Rebbe to travel more than a hundred miles. But the camp clearly meant a lot to him.

We prepared the kids for his visit so they would appreciate what an honor this was. Many of them did not know who the Rebbe was because they did not have a Lubavitch background and some of them were not even religious.

As it happened, no camper there — and certainly no staff member — would ever forget that visit. The main thing that impressed me was how happy the Rebbe looked. He was clearly thrilled with the camp. He greeted every child and he gave out a small prayer book to each one. And he went into every single building — into the shul, into the canteen, into every bunkhouse. He was interested to see for himself and learn the minutest details of the camp’s operations.

Just how much this camp meant to the Rebbe was brought home to me when, during that same summer, I had a private audience with him on the occasion of my birthday. In that audience the Rebbe asked me whether I teach the children at the camp, and I answered that I did not. My position in the camp was assistant head counselor and, as such, I did not teach regular, organized classes, although every day after prayers I would spend five minutes with the kids explaining one line from the Kitzur Shulchan Aruch — the Abridged Code of Jewish Law. But I didn’t think that’s what the Rebbe meant when he asked whether I taught the kids.

The Rebbe asked me again, “You don’t teach the children at all?” In the heat of the moment, I still didn’t realize that the Rebbe wanted to know about my brief lessons after prayers, so I again replied, “No.”

But, amazingly, the Rebbe was more familiar with my schedule than I was, and he pressed further, “Do you perhaps study a point of Jewish law with the children after prayers?”

After the Rebbe posed his question that way, I finally understood what he was asking about and replied that I did.

The Rebbe gave me a big smile, which dispelled any embarrassment that I might have felt for the misunderstanding. Then he asked me which section of laws we were studying at the time and I answered that we were studying the laws of blessings.

The Rebbe thought for a moment and said, “It would be appropriate that tomorrow morning, when you teach the laws of blessings to the children, you should also share a concept that instills reverence of G-d and sheds light on what a blessing is.”

Now, by that time it was almost three in the morning and I still needed to drive back to camp. I was willing and able to do what the Rebbe wanted but I just didn’t know when I would have a chance to research something to share with the kids that morning. Just as that thought passed my mind, the Rebbe said, “I see you are not sure what you should tell the children, so I will tell what to say. But you don’t need to tell anyone who told this to you.”

This was what he told me: “Explain to the kids that when they are making a blessing they should think for a moment about what they are saying. It’s pointed out in the Tanya and in other chasidic works that we start each blessing with ‘Blessed are You…’ In so doing, we are using the second person pronoun ‘You’ as if we are speaking directly to G-d one on one. And then we end each blessing in the third person — describing the awesome things the Creator does for us: ‘Who brings the bread out of the earth,’ or ‘Who gives sight to the blind’ and so forth.”

The Rebbe instructed me to explain to the children that a Jew is so close to G-d that he addresses the Creator of the Universe as “You,” and that this is just astounding. He wanted them to appreciate the closeness that they had with G-d.

I gave over his teaching to the kids, and I know the message got through because I heard from people forty years later that they still remembered this particular point.

The Rebbe knew that this camp was not a one-day thing, not a one-month thing, and not a one-year thing. What these kids experienced and learned at camp would stay with them for the rest of their lives.

Many of the kids that attended the camp had little Jewish background, but for the rest of their lives, they remained connected to Yiddishkeit because of what they had learned at Camp Gan Israel. And that was the Rebbe’s intent.

Rabbi Simcha Piekarski, who lives in Deerfield Beach, Florida, spends his time teaching and studying Torah and working with his wife in her interior design business. He was interviewed by JEM’s My Encounter Project in September of 2019.