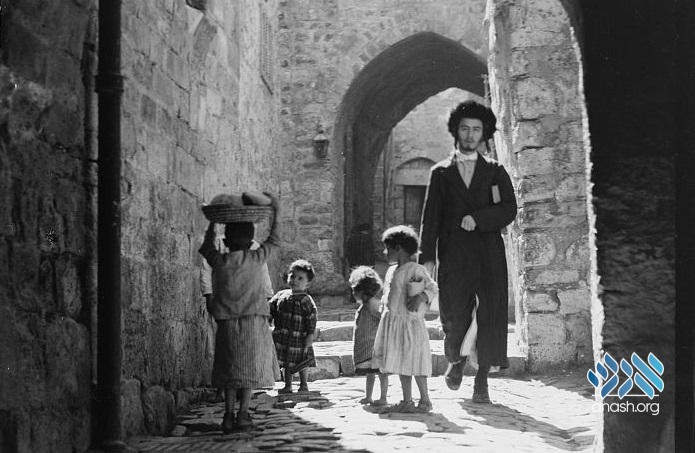 Motzei Shabbos Story: When Reb Berel Bieber, a respected Chabad Chossid in Yerushalayim, was informed by a tax inspector that he owed a enormous sum of taxes, he showed no worry despite not having any way of paying.

The following story was recorded by Aron Melamed of Haifa, a great-grandson of Reb Berel. Adapted and translated from the account published in Sichat Hashavua, vol. 569.

Reb Berel Bieber, my grandmother’s father, was a widely respected Chabad Chassid, a diligent student of Torah, and a kindhearted man who took an active role in community affairs. He lived in Novozybkov, Belarus, where he provided for his family from his small business.

In 1890, Reb Berel chose to immigrate with his family to the Holy Land. To facilitate this, he first went alone to lay the groundwork for a smooth transition. He joined a new religious settlement in the Hadera region, where the main source of work was draining swamps.

The pioneers greatly respected him, as draining swamps was dangerous and difficult work, and at the end of the long day of manual labor he would immerse himself in Torah study. Reb Berel never complained; on the contrary, he was wont to say, “Thank G‑d for allowing me to work the earth of the Holy Land.”

After a few weeks, Berel came down with a high fever and was hospitalized. With the tireless efforts of the doctors and nurses, he was saved. When he recovered, the doctor ordered him to either return to Russia or move to Jerusalem, where the air quality was better than the marshy swampland. Reb Berel was pained that he’d have to leave working the earth, which he saw as a holy mission, but the doctor’s order took precedence.

Returning to Russia was out of the question. He moved to Jerusalem and, in time, settled in the Old City. He acquired a small shop in the Muslim quarter, where he sold staples such as flour and sugar. The grains were imported from Odessa to the port in Jaffa, and from there to Jerusalem.

Once the business got off the ground, his wife and children joined him in Jerusalem. Reb Berel’s grandson, the late Dr. Aryeh Shoshan, related:

“During my childhood, I loved to hang around my grandfather’s shop. I see him clearly, sitting at the counter, his face shining, immersed in a volume of Talmud.

“When customers entered, they’d do so quietly, always with an excuse for “bothering” him. As soon as he noticed them, my grandfather would mark his place, close the Talmud, and serve them patiently and graciously.

“As soon as the inspector left, my grandfather sat back down and returned to his Talmud as if nothing had happened. Astonished by his composure, I asked, “Did you hear what the person said?! They will confiscate your store tomorrow! He looked serious!” My grandfather looked at me with an ever comforting smile, “Worry not, the help of G‑d comes in the blink of an eye.”

“That night I could not sleep. Early in the morning, I returned to the store to witness with my own eyes how G‑d would help.

“It was eight o’clock, and I asked my grandfather, “What will be?” The answer was the same, “G‑d’s help can come in the blink of an eye.” And he returned to his study.

“Ten o’clock came and went, then eleven, and I asked yet again, “What will be?” Still, I received the same answer. As the minutes ticked by, I felt my heart beating faster and stronger.

“At 11:15 am, a city councilman burst into the store, and asked my grandfather in a desperate, panicked voice, “A platoon of Turkish soldiers just arrived without any advance notice and we have nothing to feed them. Perhaps you have a large amount of flour so we can bake some bread?” Grandfather deliberately closed his book and rose to serve his customer. The city official pressed, “Please! Quick, help save us all!”

“Grandfather got up and calmly went to the storage house behind the store. He piled up a few sacks of flour and brought them to the city councilman. The grateful bureaucrat hastily took out a wad of bills, paid for the flour, and left just as quickly as he had arrived.

“My grandfather then walked to the government office a few blocks down and paid up his debt in full. When he came back, he sat down in his chair and resumed his learning, in the familiar tune, now with a slight smile on his face.

“Indeed, I was privileged to witness how G‑d’s help comes in the blink of an eye.”