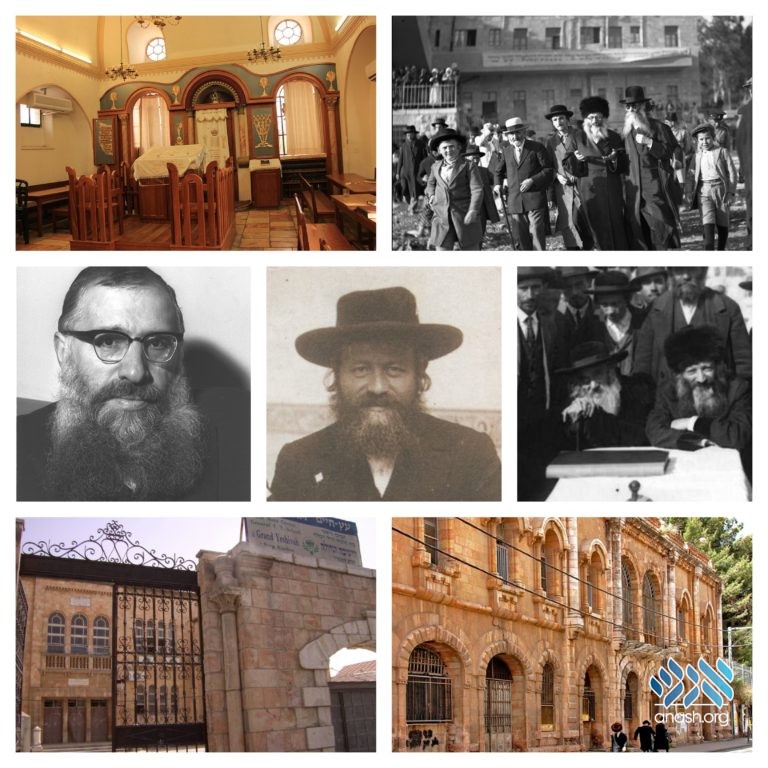 Sunday, 12 Av, was a very busy day for the Frierdiker Rebbe. This was his final day in Yerushalayim and there many Gedolei Yisroel, mosdos haTorah and institutions that he still wanted to visit before leaving. There were also many people that wanted to go into the Rebbe for yechidus before his departure.

But first, a short review of Shabbos, 11 Av, and Friday 10 Av, the Frierdiker Rebbe’s second Shabbos in Yerushalayim.

Friday 10 Av the Frierdiker Rebbe purchased ship tickets from Alexandria, Egypt back to Trieste, Italy. That morning, from eight to ten o’clock, the Rebbe sat and wrote the ma’amar ד”ה אתה הראת – the one he said the previous night in Yeshiva Toras Emes. After finishing to write the ma’amar the Rebbe went to visit mosdos of Torah and chesed in Yerushalayim.

At the famous Diskin Orphanage, the Rebbe was greeted by Rav Yosef Chaim Sonnenfeld, Rav Eliyohu Klatzkin, and the orphanage staff. From there he visited an old age home. At the Shaarei Tzedek Hospital, he was greeted by Dr. Moshe Wallach, the director of the hospital, who showed the Frierdiker Rebbe the facilities. Before returning to the hotel the Rebbe also visited the Bikur Cholim Hospital.

Back at the hotel, the Frierdiker Rebbe saw people in yechidus. Notable people that went in were the Rebbe of Rachmistrivka, Reb Nuchem’tshe, and his two sons, Reb Avrohom Dov, and Reb Dovid. They spoke for about half an hour. At 1:30 pm yechidus ended for that day, and only then did the Rebbe eat something. The Rebbe then went to the mikvah and rested. He then read the letters that arrived from his Rebbetzin and from the Rebbe and the Rebbetzin Chaya Mushka. At 5:30 pm he sent a telegram back home thanking them for the letters and wishing them well.

Starting from Friday afternoon the hotel began to fill with people from all over Eretz Yisroel who came to be near the Rebbe. They filled the halls and rooms of the hotel. The sadronim (organizers) learned from the previous week and made sure to keep order. They built a bimah on the hotel roof so that the Rebbe would not be pushed by the crowds.

Shabbos morning the Frierdiker Rebbe was awake at 5:00 am and started preparing for davening. Only at 2:00 pm did he eat Seudas Shabbos.

At 6:30 pm the Frierdiker Rebbe ascended to the roof and began to say the Ma’amar ד”ה גדול יהי’ כבוד הבית, until 7:40 pm. Reb Shimon Glitzenshtein later wrote in his diary that the spiritual pleasure that people felt from hearing the ma’amar can be summed up as such: A heartfelt wish that halevai he would stay a few more Shabbosim so that we should merit to hear more ma’amorim from the Frierdiker Rebbe’s mouth.

Motzoei Shabbos was once again dedicated to yechidus from 8:30 to Midnight.

At seven o’clock on Sunday morning, the Frierdiker Rebbe was already after schachris. He then sat down to prepare the Ma’amar that he said Shabbos so it could be published and studied publicly.

First, he paid a visit to the home of Reb Shlomo Leib Eliezarov, who for many years was the Rebbe Rashab’s shliach in Bukhara. There he spent some 20 minutes. Then they went together to visit the Bukharian quarter.

At the central Bukhari shul, some 70 elders of the community waited for the Rebbe dressed in their Shabbos finery. Outside the streets were packed with Bukharian Jews waiting to catch a glimpse of the Rebbe. When the Friediker Rebbe passed they waived and threw kisses, such was their admiration for the Frierdiker Rebbe. The Rebbe later wrote how impressed he was with the Bukharian Yidden and their love for Talmidei Chachomim and respect for Tzaddikim.

The next stop was the Bnei Tzion school for Sefardic boys, administered by the Agudas Yisroel. There he was greeted by Reb Moshe Porush and Reb Moshe Blau. The Rebbe later wrote how overjoyed he was to see them with long peyos, looking like “the children of Yaakov Avinu,” singing and welcoming him. Years later, after the histalkus, Reb Moshe Porush remembered in a letter he wrote the Frierdiker Rebbe’s support for his mosad.

The Frierdiker Rebbe then went to visit Torah and Chesed institutions, starting with the Yeshiva Etz Chaim. The Rebbe was impressed by the big building and the great amount of talmidim there. Reb Menachem Porush, who later served as a member of parliament, was a 13-year-old bochur learning there. He remembered the preparations in yeshiva at that time and the excitement among the talmidim about the Rebbe’s visit. The Frierdiker Rebbe walked among the boys and asked some of them what they were learning. He then spent a half-hour at the General Orphanage institutions.

At 11:30 am the next stop was at the home of the Sefardic Chief Rabbi, Rav Yakov Meir. After some 20 minutes, Rabbi Meir asked that the Rebbe visit some of the institutions that he administered, as well as others. The two then went together to visit Rav Yosef Chaim Sonnenfeld. After conversing for some 40 minutes, the Frierdiker Rebbe and Rabbi Meir visited the Botei Machseh neighborhood.

That Sunday was a very tense day. The tensions between Jews and Arabs was at its peak, with Arab incitement by their leaders increasing steadily. The Kosel was a very contentious place. On Tisha B’Av morning an Arab mob stormed the Kosel plaza and disrupted davening and destroyed seforim and furniture. The Frierdiker Rebbe asked for a police escort for his planned visit to the Old City but was denied. That didn’t deter him, however, from visiting there.

In the Old City, he visited the Misgav Ladach Hospital, as well as the Sdei Chemed Library. From the hospital roof, the Rebbe could see the Mokom HaMikdash. From there he visite the Yeshiva Porat Yosef, as well as the Yeshiva Sha’ar HaShomayim. In his diary, the Frierdiker Rebbe writes how he wanted to visit the Chayei Olam Yeshiva but was told that the Arab mob was nearby and that he should stay away.

In the afternoon, cooler heads prevailed in the Old City, and the mobs dispersed. When the Frierdiker Rebbe heard this he asked to visit the Tzemach Tzedek Shul in the Old City. It had been active for the last decade or so, due to the hishtadlus of Reb Leib Slonim, who made sure that there were minyanim there, despite the difficulty involved therein. Reb Leib had also accompanied the Frierdiker Rebbe on his travels in Eretz Yisroel and had asked the Rebbe to visit the shul. The Rashag tried to talk them out of it, due to the physical effort it would take for the Frierdiker Rebbe to visit, but the Rebbe said “nu, m’geit!” Now that the tensions died down a bit the visit was possible.

Until the entrance to the Armenian Quarter, the Frierdiker Rebbe drove by taxi. There he needed to disembark and walk. The walk to Tzemach Tzedek was through the narrow Old City streets and required much physical effort. Rashag saw this and said to Rabbi Slonim “zeh vos du host getohn!” (see what you’ve done!) to which the Rebbe answered “zeyer gut hostu getohn!” (you did very well = the right thing). Once inside the shul, the Rebbe spent a few minutes there and asked to see his relatives, descendants of Beis Harav. After meeting them there he thanked them and told them how happy he was to greet them.

Reb Leib’s wife, Shaina Lieba Slava Slonim, was not feeling well at that time. She asked her husband to ask the Frierdiker Rebbe for a brochoh for her health. Being so busy with the Rebbe, Reb Leib forgot to ask for a brochoh. So Mrs. Slonim went herself and followed the procession. When the Rebbe saw her he asked that she come closer and say what was on her mind. Before she could say a word the Frierdiker Rebbe said: “zeit gezunt” = be well, healthy.

At 6:30 pm the Rebbe concluded his visit to Tzemach Tzedek.

From the Old City, the Frierdiker Rebbe drove to see Rav Kook. That visit took almost 90 minutes and concluded at eight o’clock. He then drove to the home of Reb Nuchem’tshe of Rachmistrivka, where he spent another hour. At the hotel, another 100 people were waiting to go into yechidus! The Frierdiker Rebbe obliged them and spent until 12:30 am taking people in and hearing their requests. After Maariv there was yechidus until 1:30 am.