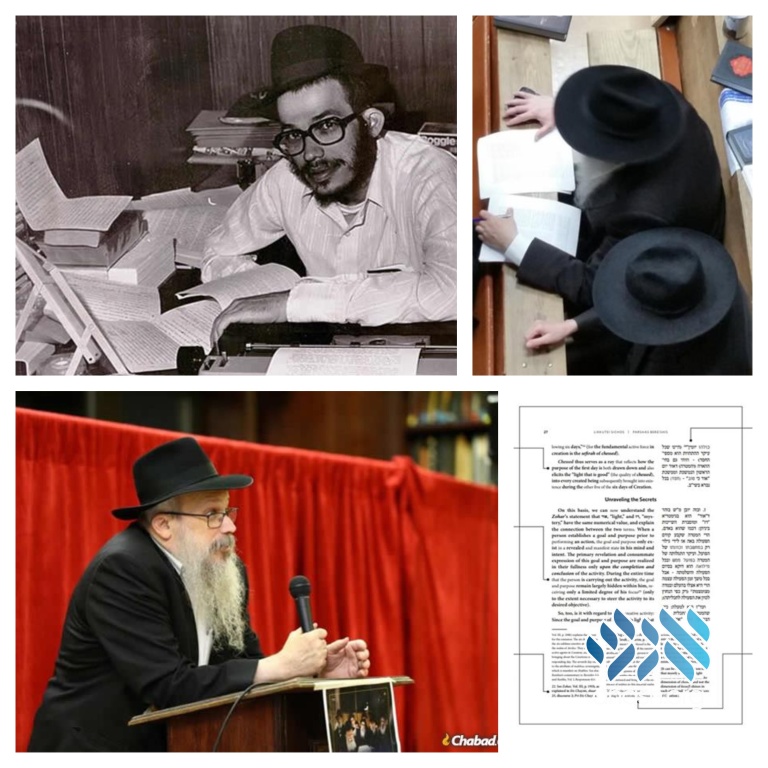 For decades, Rabbi Yonah Avtzon could be seen walking the streets between his home and office in Brooklyn’s Crown Heights neighborhood, reviewing page-after-page of manuscripts and printer’s proofs through a pair of reading glasses perched at the end of his nose. The longtime director of Sichos In English (SIE) publishing, Avtzon personally read through every one of the many millions of words being readied for print by the team he oversaw, this aside from his other responsibilities.

Even as he battled the kidney ailment that eventually took his life, the stacks of papers came along for his increasingly frequent trips to the hospital. Avtzon trained his eye on all aspects of the work, from basic copy edits to potential content issues—a sort of last line of defense. This dedication came as a result of an answer he had received from the Rebbe back in the 1980s, just as SIE was picking up steam in rendering Chassidic works into English. The Rebbe had told Avtzon that it would not be necessary for the Rebbe to personally review every piece of material SIE was publishing as long as there was someone who was accountable for it. And so, Avtzon shouldered that responsibility.

One of the last projects Avtzon worked on was a new bilingual, or rather, trilingual, translation of Likkutei Sichot, the vast collection of the Rebbe’s Torah teachings published as Hebrew and Yiddish essays over a period of roughly three decades, and collected into 39 volumes. After an intense 18 months of labor on the part of a team of writers and designers, Bereishit, the 728-page first volume of the projected six-volume English set, is being released this week by SIE in conjunction with Kehot Publication Society. The translation process was led by SIE’s prolific editor in chief Rabbi Eliyahu Touger, joined by Rabbi Sholom Ber Wineberg, and reviewed by Rabbi Sholom Zirkind and the staff of Kehot.

On Jan. 1 of this year, while the project was still in its earlier stages, Avtzon—in the midst of treatment—messaged his son, Rabbi Shmuly Avtzon, that he had left a ream of drafts of the new Likkutei Sichot in his home office and asking that he take a look at it. The younger Avtzon, who at the time was working as an editor on the project, found the papers with his father’s careful markings and asked if there was anything in particular he should pay attention to.

“Just see it so you know what I look for,” his father replied.

It was the last text message his father sent him. At 3 a.m. on Jan. 9, Rabbi Yonah Avtzon passed away at home at the age of 61.

“It was like he was setting me up to continue his work,” says the younger Avtzon, who subsequently, at his family’s request, filled the role as director of SIE.

Likkutei Sichot has been described as the heart and soul of the Rebbe’s teachings, a unique fusion of all elements of Torah, from the exoteric to the esoteric, and a key to grasping the Rebbe’s view on Judaism and life itself. The new annotated translation is the first new major project completed by SIE since the elder Rabbi Avtzon’s passing.

If there were one Torah text that absolutely needed to be translated into English, what should that be? That was the question Yaakov Cohen posed one Friday-night meal a few years ago in Jerusalem. His host, Rabbi Yisroel Noach Wichnin, the dean of the Mayanot yeshivah for returnees to Jewish life and practice, didn’t even take a moment to respond.

“Without any hesitation, he said Likkutei Sichot,” says Cohen, the founder and president of Beco Management, a Maryland-based national real estate management firm. “The rest of Shabbat all I could think of was jumping into this project.”

When Shabbat was out, Cohen contacted Avtzon, who jumped on board. The completed work contains three talks on each weekly Torah portion in the book of Genesis and features the talk, or sicha, on one side, either in the original Hebrew or Yiddish (Likkutei Sichot contains both) with a new English translation and explanation opposite it. Also translated into English are the Rebbe’s copious footnotes.

The Rebbe famously taught through the medium of the farbrengen—regular gatherings on Shabbat, Jewish holidays and special occasions on the Jewish calendar held at the cavernous synagogue at 770 Eastern Parkway in Crown Heights. During these gatherings, which could last as long as nine hours and were interspersed with song, the Rebbe would expound on a wide range of topics, offering unique insights on the weekly Torah portion, in-depth analysis of Talmudic passages, profound exposition of the esoteric parts of Torah, and the Jewish worldview on historic and current events, all of it through the unique lens of Chabad Chassidic philosophy. It is estimated that the Rebbe spent 11,000 hours leading these gatherings over a period of 42 years.

As noted in a previous Chabad.org article on the continuous Toras Menachem publishing project, the system of recording and transmitting the Rebbe’s teachings follows a unique process dating back to the founding of the Chabad movement almost 250 years ago. Teams of scholars, assisted by laymen, would memorize the Rebbe’s talks and then reconstruct them once Shabbat or a Jewish holiday—when use of a recording device is prohibited according to Jewish law—was over. These scholars and scribes, led since day one by the venerable Rabbi Yoel Kahan, would then submit a transcript to the Rebbe for his editing.

Likkutei Sichot stemmed from this process, but required a higher level of the Rebbe’s personal participation since from the beginning of its publication, it was not merely an accurate transcription of the Rebbe’s talk but a reconstructed essay. Since teaching via the spoken word differs greatly from what is required when rendering it into the written form, the Rebbe did not want unedited transcriptions to be formally published. It was also not uncommon for the Rebbe to speak about a particular subject for multiple weeks in a row, and so it would be the scholars’ work to combine these, as well as other pertinent elements the Rebbe had previously written or expounded upon, into the essay they presented to the Rebbe for editing.

According to a detailed article published in the June/July 2017 issue of A Chassidishe Derher magazine, beginning in the summer of 1958, the Rebbe edited a talk every single week for a full year, these forming the first two volumes of Likkutei Sichot. He did so again in 1962-63, released as volumes three and four, and continued to edit on and off through the late 1960s and early 1970s, producing more volumes. Beginning in 1975 and continuing until 1992, the Rebbe edited a sicha every single week, forming the next 29 volumes of Likkutei Sichot as well as the 11-volume Sefer HaSichot. This work was aside from many other publishing projects undertaken by the Rebbe, including the six-volume Maamarim Melukatim, which contains only Chassidic discourses that he edited.

The Rebbe’s editing process was by no means cursory, and he would often bring drafts with him home, where he continued working on them for hours. His edits, made in pencil, touched on all aspects of the sicha, from grammar to exposition. At times, the Rebbe could add an entire section to an essay, in one case in 1977 doing so less than a week after suffering a severe heart attack. “The Rebbe was often sharp when working with us,” Rabbi Leibel Schapiro, a member of the Likkutei Sichot team and the dean of Yeshivah Gedolah in Miami Beach, Fla., told the Derher. “There were many things that the Rebbe simply fixed without comment, but [sometimes] he expected us to know better … ”

The result was something new and exciting, a combination of explanations of Rashi—beginning in 1964, the Rebbe introduced an innovative approach to studying Rashi, analyzing his commentary with simple logic and emphasis on the text—and other classic commentaries, Talmud, Halachah, Kabbalah and Chassidus. “What was distinctly unique … ,” the introduction to SIE’s translation explains, was “the way he integrated all those different branches of wisdom into one symbiotic entity.”

“[Likkutei Sichot] is where the Rebbe placed his Torah message for all generations,” explains Touger, a renowned scholar who, among other major works, spent 20 years translating Maimonidies’ opus, the Mishneh Torah. Each sicha, he says,“brings down the Torah on all levels and places it into everyday language people can understand. Precisely because it was initially delivered to listeners, it has this unique ability for people to tune in to this kaleidoscope of subjects and really make it a part of their understanding.”

Cohen, who together with his wife, Karen, funded the bulk of volume one—the completed project will ultimately cost more than $1 million—and has been instrumental in seeing other works of Chassidus rendered into English, says he sees a vital mission in opening up these texts—Likkutei Sichot in particular—to the English reader.

“That’s the world that I come from,” says Cohen. “If you want to know what the Rebbe said, Likkutei Sichos is where you find him, so opening it up to people at all skill levels is so important.”

From SIE’s modest beginnings in 1977, when Rabbi Yonah Avtzon and a few fellow yeshivah students first began translating the Rebbe’s weekly talks into English for the benefit of many thousands of readers around the world, to Avtzon’s subsequent transformation of SIE into a major English Torah publisher, the goal always remained the same: to spread the “living waters” of Chassidus and the inner dimensions of Torah far and wide.

In the last three decades, SIE has published hundreds of books in English on a wide range of topics, covering the Jewish lifecycle, stories and history, and Jewish law, including a soon-to-be completed translation of Rabbi Schneur Zalman of Liadi’s Shulchan Aruch, the Code of Jewish Law. Seeing his work as a mission, Avtzon consciously kept his book prices low, and partnered with Chabad.org to make almost all SIE content available free to the public online.

“This was a project that made Yonah exceptionally happy,” says Mayer Prager, a member of SIE’s advisory board. He recalls that SIE, or “Sichos In English,” was originally created precisely to share the Rebbe’s sichot with the English-speaking public. “There was an extra energy he had; after all, it’s the main mandate of the organization.”

Touger agrees. “Yonah was passionate about everything, but there’s no question that he saw the sichot as his life’s purpose. Any serious person who wants to know what the Rebbe said, what he taught, needs to look towards Likkutei Sichot; the Rebbe placed himself into it. It’s a major accomplishment to make this available for the world.”