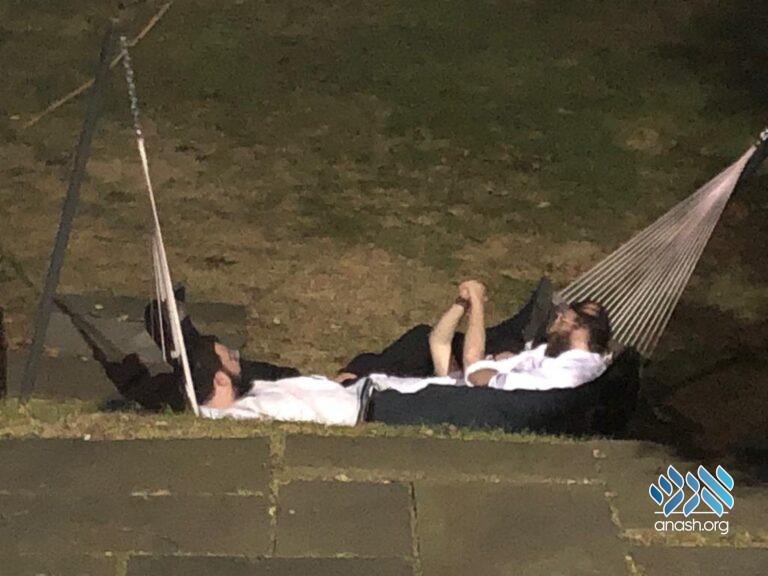 The most seminal moments of our lives are often the ones we least remember. Or choose to forget. The bris, the bar mitzvah parshah, a scolding from a schoolteacher, our first hug, and a most meaningful farbrengen. I woke up Sunday with a dreadful ache on my left elbow, only to discover a slight bruise and scab in the making. Oh my, I mused, I forgot to call Rabbi Levi Shemtov in Detroit last night to reschedule our weekly kvius in the Rebbe’s Igros. I hope he didn’t fall asleep with his phone on his lap patiently awaiting my call, I thought. We shall study tonight. Levi will understand. Detroit too, is known for their farbrengins.

Upon waking up to discover the protrusion on my elbow, I immediately sent out a message to the bochurim on our WhatsApp group, asking them to verbally reconstruct the weekend for this composition. Over the past three days I have analyzed our collective notes and logged them here.

This past Friday we commemorated the Alter Rebbe’s yahrzeit. Chaf daled Teves. With Yale closed for COVID-19 there were few available options for an event. Time to move to plan B. I called some bochurim in Crown Heights and invited them for Shabos. “And don’t forget to pick up some farbeisin at Dovid Malkah. I’ll get the mashkeh, my wonderful wife Toby will prepare a feast and we’ll bivouac at our place for the weekend. Certainly, we will indulge in its significance, say tehillim for Shabos mevarchim and share some insights on the commemorative day’s practical implication.”

My phone vibrated, and in an indecipherable English it read, “we are at your door.” With Friday’s predictable traffic I was certain they would end up in Greenwich for Shabos and Rabbi Yossi Deren would be pulling out mattresses, supplementing the cholent and  nourishing a few unanticipated starving souls from the shchunah. But no. The 2003 Toyota Camry was pulling a U turn outside my house as the Yale Shuttle driver swerved off to the sidewalk avoiding the approaching traffic. NY plates. Conceivably stolen. Odometer read 89000 miles. Questionable title. A rental from some Israeli immigrants in the US on false papers? A surplus Uber rental? Owned by these eltera bochurim? Largely unclear.

Friday Mivtzoim? ABC. Always Be Closing. First prize a Cadillac Eldorado. Second prize a set of steak knives.” I reminded them that David Mamet who wrote those industry standard lines is a genius and proud Jew. Jews understand the struggles of salesmen. Any Lubavitcher going on Merkos Shlichus or cold calling Jews in their hometown knows that. I would wager that the Mormons have their boys rehearse the adage before sending them on overseas missions. Success is always with he who has the leads and utilizes them well.

They parked and unpacked the disheveled cardboard box brimming with salads and dips. Farbrengin salad, olive dip, pitcha, chopped liver, matbucha, tomato dip, schmaltz herring, pickled herring, maatjes and a bekel of potato kugel. All for a total sum of ninety-eight dollars. Do they sell farbrengen salad in Flatbush I wondered, and which mashpia with culinary skills ever conjured it up. Oh, I forgot the cold cuts. Pastrami, corned beef and smoked turkey. Woe to naysayers who claim Chasidim don’t live large. Bgashmiuus ubrichnius, the Rebbe always said. The Rebbe was never one to play with words. Not even one. Ever.

“How many of you need to take a shower, hit the mikvah anyone? Toothbrush? Deodorant?”

“We’re fine,” they replied in unison.

“Where can we have a smoke before Shabos?”

“Head out the back of the house fellas. Litctzin is in 6 minutes.”

My phone rang again. The second convoy screeched into the driveway almost killing the squirrel. Same deal. Four additional fully decked out bochurim. Mufshatim. A change of clothes, some seforim, a dvar malchus, a rambam, all stuffed into one plastic bag. No shoe polish. No cologne. No cufflinks. And now a days they charge for plastic bags. The new fifty cent Samsonite.

Well Yossi, they made it to New Haven.

As they climbed two flights of stairs to the guest rooms, my phone rang. Three minutes now to lichtzin. Who is calling I wondered? An unsaved number, I better answer it I suppose.

“Shmully, last time we came to your home, you said that prior to our next visit we should call and remind you to buy mashkeh?” Menachem Wagner from the New Haven Yeshiva Gedolah. Classic Wagner. “Why didn’t you call me in 15 minutes and remind me then to buy mashkeh,” I teased. I then shut down my phone for Shabos.

The sun set on West Rock and Shabos descended on the Eastern Seaboard. At this point Chaf Daled Teves 5781 had come and gone. The Alter Rebbe’s yahrzeit had technically passed. That poignant thought reverberated in my mind, for sadly little had changed. Friday was frankly uneventful. I had woken up before dawn on Friday and read another hundred pages about the Alter Rebbe’s life in Sefer Hatoldos. Hafoch bah vihafoch bah. Search and you will find.

The concluding months of the Rebbe’s life were spent fleeing to Russia’s interior along with sixty carriages loaded with immediate family and a few Chasidim. The cavalcade was escaping Napoleon’s invasion, his march to Moscow and subsequent final retreat culminating in his ultimate defeat. With the passing of the Rebbe, Chasidim experienced the end of an era. The loss of a founder is always shocking and the Rebbe’s tragic final days were especially heart wrenching and catastrophic, considering the calamitous wartime events unfolding rapidly, with no precedent. The Patriarch, Schneur Zalman of Liadi perished on the roadside. But not before predicting the collapse of the French army. The Rebbe, the Tzadik, the mystic, the halachacist, the philosopher, the agrarian, the kabbalist, husband, father, grandfather. The seer, the visionary, master of Chasidim and for all intents and purpose, Chasidus at large.

How does one even venture to talk about the Alter Rebbe? Where does one begin? Preposterous for spiritual pygmies like us. And it was the day after. Chaf daled had, with the setting of the sun, gone with the wind.

The day after a yoma dipagrah figuratively resembles a hangover. They are often painful, regretful and shameful, yet simultaneously sobering and soothing. They compel us to reflect, reconsider and resolve. The most dreadful ones have turned many a drunk into lifelong sober men.

Our WhatsApp group titled Grandpa was started in memory of Shazar, Schneur Zalman Rubashov, a former President of Israel and the only person the Rebbe kissed publicly. Though I should mention that Reb Sholom Jacobson once told me he saw the Rebbe kiss Hachossid Itcha Springer at his chupa. There is no film of that event and Reb Sholom was a child at the time. I had called Reb Sholom to inquire about printing a Tanya on the Colorado River on an excursion I took with Rabbi Dov Greenberg, some friends, family, and of course some bochurim. We rafted the river through the entire Grand Canyon and were the first minyan to daven on its shores for six consecutive days. And being Chodesh Elul we blew shofar in the riparian womb of the Universe. It was extraordinary. “B’mokom Shegarim bah Yehudim,” Reb Sholom remarked. The Rebbe’s directive was to print a Tanya only where Jews resided. In the 220-mile trip down the Colorado we didn’t see any living Jews, so we didn’t get Reb Sholom’s permit to print a Tanya. In fact, we didn’t see any living gentile natives either. Frankly there was barely a living animal in the Canyon other than an occasional frog, a few rattle snakes and random sightings of extremely rare big horn sheep. That was it.  But before I hung up, Reb Sholom gave me two hours of Tanya printing stories. He should be leading more farbrengens.

In his autobiography named Morning Stars, translated from the Hebrew title Kochavei Boker, Shazar reminisces of his childhood in Russia with all the nuances of the idyllic life of the shtetel. I walked off with the book one day from Yale Hillel. I hid it in my talis as I slipped out of the chilly edifice. A chasidisha gneiva in broad daylight. I assumed it truly belonged at my place, right up against the famous photo of Shazar by the Rebbe’s farbrengen, that hangs in our living room.

Speaking of the photo. President Jimmy Carter’s Ambassador to Israel, Sam Lewis and I, once had a lengthy conversation at my home over some hash browns and an omelet about whether Jimmy Carter was an anti-Semite. I made sure the omelet was cold. I needed closure on the subject considering how adamantly the Rebbe campaigned against the 1979 Camp David accords in which Israel relinquished the Sinai in exchange for a Cold Peace with Egypt. The Ambassador claimed that Carter associated the Palestinians with American Blacks and Jewish Israelis with White Southerners. Lewis and Carter had falsely equated their shared perception of dark skinned victimization by white imperialists to feed their distorted narrative of Jewish independence and a liberal American political agenda. I knew we were wasting time and he was simply ignorant of the history of Israel, so I served the coffee and escorted him respectfully to the door. In his departure he glanced at the wall and asked who was in the photo. Not knowing which of the two characters he was inquiring about, I replied “President of Israel, Shazar.” “Oh” he said, “He too came to the Rebbe…” How odd I thought, the American Ambassador to Israel recognized the image of the   Rebbe but not Israel’s President. Lewis was a kind man. Carter is a Shanda.

During a weekly Chavrusah in Shaar Habitochon with the former Hillel Director, I ultimately confessed to having slipped the book out of his library. “I’m glad someone is reading it” he said. So, I kept it.

In the chapter titled Grandpas Departing Words, Shazar recounts the final conversation with his grandfather as he embarked to Eretz Yisroel, then Palestine, in pursuit of his Zionist dreams. His grandfather, a devoted chosid of the Rebbe Maharash counsels him to always remember the nigun of the Alter Rebbe, the daled bavos. He advises his grandson at their final moment of departure that when one can invoke the nigun in his mind and remember the melody in detail it is a signal that the Rebbe is with him. And vice versa. Then they bid farewell. Shazar acknowledges that during the most challenging and strenuous times of his life he recalled the nigun and it carried him through the landmines…

Rabbi Hecht can be reached at Shmully@279crown.org