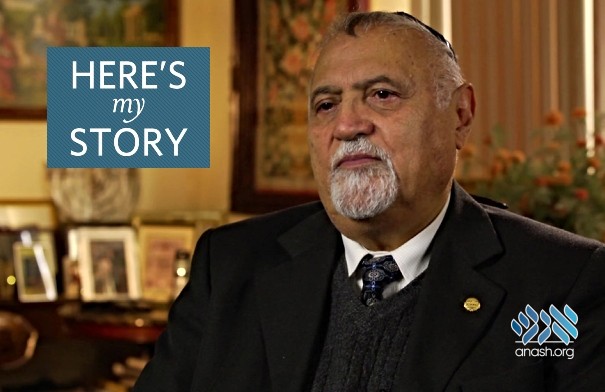 Rabbi Yedidia Ezrahian, a leading rabbi and activist in Iran tells of his efforts – together with Rabbi J.J. Hecht – to save Iranian Jews during the revolution, and of his subsequent meetings with the Rebbe.

Rabbi Yedidia Ezrahian was a leading rabbi and activist in Iran who continued to serve the Jewish Iranian community in New York until his 2007 retirement. He was interviewed in his home in December of 2011.

I was born in the city of Sanandaj, Iran, to a line of rabbis that originally come from Safed, Israel, nine generations ago.

After the 1979 Islamic Revolution broke out, I was appointed as the head of the local rabbinic court, as well as the head of the community council, making me the point man between Iranian Jewry and the new regime. Not long after that, a group of students seized the American embassy in Tehran, along with fifty-two hostages. At one point during this crisis, the UN negotiated a clerical visit and, after some pressure from Jewish organizations, agreed to also send a rabbi for the three Jewish hostages. The Iranians didn’t want any Americans or Israelis, and so the rabbi of Mexico was chosen for the task — Rabbi Avraham Mordechai Hershberg.

Some tried to dissuade him from traveling to Iran at such a sensitive moment, so he decided to consult with the Rebbe. About a week before leaving, he apprised the Rebbe of his travel plans and his concerns. The Rebbe urged him to make the trip and reminded him to also bring some candles so as to light the menorah with the Jewish hostages for the upcoming holiday of Chanukah. Rabbi Hershberg did just that.

The day after their visit, the clergymen were invited to the mass Friday prayers in the main mosque of Tehran with the Supreme Leader Ayatollah Khomeini in attendance. At one point, the congregation all knelt and then bowed down in prayer — except for Rabbi Hershberg and myself. Afterwards, an overbearing cleric came over to us. “Why didn’t you show us respect?” he demanded angrily. “Why didn’t you bow down like the priests did?”

“Those priests come from Syria and Lebanon and know Arabic,” Rabbi Hershberg explained. “But I don’t understand what is being said. Our Torah commands us, ‘do not prostrate yourselves,’ so how can I bow if I don’t know what I’m bowing for?”

The mullah walked off, but shortly thereafter, he returned. “The Ayatollah has requested your audience.”

Taken aback, I offered a silent prayer, and accepted my fate.

Then we went to Khomeini.

“Give the other rabbi my thanks,” said Khomeini, to my surprise, “for not trying to ingratiate yourselves. I respect that you acted in accord with your faith.”

When I translated this to Rabbi Hershberg, he shot back: “This is a golden opportunity! Ask him for a few minutes to talk about the needs of Iranian Jews.”

When I relayed this request back to Khomeini, he asked his son Ahmed to set up a meeting that Sunday in the religious city of Qom, where he lived.

Indeed, we managed to bring up several pressing issues for the Jewish community. For example, members of the Revolutionary Guard had been confiscating any religious article bearing the Star of David, but when we explained that this was a religious symbol that predated the Israeli flag, we were promised that no Jews would be harassed over such items anymore. We secured permission to use wine for ritual purposes, in spite of their religious prohibitions against the consumption of alcohol, as well as an allowance to attend our synagogue for the early morning Selichot prayers, in spite of the curfew that was in effect at the time.

With time, I even developed a close relationship with Ahmed, which enabled me to do other good things for the community.

Now, I had already read about the Rebbe in some of the newspapers we’d get from Israel, and about a year before the revolution, he had also sent two young Chabad chasidim to Iran. As the country became ever more unstable, people began asking about getting their children out of danger, and I asked those young men whether they could help bring those children to the US. Later, when the Iran -Iraq war broke out, and boys as young as sixteen began to be drafted, we understood the urgency with which we had to move our youth out.

This was when Rabbi J.J. Hecht, a dynamic Chabad activist in the field of American Jewish education, stepped into the picture. With the Rebbe’s encouragement, and through his contacts in the upper echelons of the government, he managed to secure visas for hundreds of children. Alongside that, arrangements were made to absorb these youth in the United States, both physically and spiritually, and there was even a schooling program established for them.

For the first year, there were still regular flights out of Iran, but when the authorities made things more difficult, we had to spirit them over the border with Pakistan, and then onto Turkey or Europe, from where the children could continue to Israel, or get an American visa. Israel’s Mossad and the American Joint both became involved in this complex operation, which managed to evacuate almost all of Iran’s Jewish youth over two years, but it all began with the Rebbe’s approval and encouragement.

Fearing the regime’s reaction to all this, some in the community opposed this operation, and in time somebody denounced me as an agent of the Mossad and the CIA. In 1982, I was forced to flee, leaving behind a beautiful collection of Torah books and rare manuscripts that had been in my family for generations.

At first, I lived in Israel, but soon followed my son and daughter to America. Once I saw the spiritual neglect that prevailed among the young Iranian emigres there, I realized that they were now in danger of assimilation, and committed to returning them to the fold.

In New York, I visited Rabbi Hecht, and had the great privilege of meeting the Rebbe. After a brief introduction by Rabbi Hecht in the synagogue, the Rebbe invited me for a private audience.

Upon entering his office, I was impressed by the modesty of the room. When I saw the Rebbe in that more private setting, I could sense the holiness emanating from him, and found myself unable to stem the flood of tears that suddenly burst out.

“Why are you crying?” asked the Rebbe. “We are told to serve G-d with joy!”

“They are tears of joy,” I replied.

The Rebbe asked me a string of questions about the state and welfare of Iranian Jewry. After answering them, I asked him to pray — both for those who were still there and in physical danger, and for those who had left and were in spiritual danger.

When I told him how I had translated the siddur for Persian Jews who did not know Hebrew, the Rebbe replied, “That’s good, but not enough. You also need to translate the Kitzur Shulchan Aruch, so that they will know basic Jewish law.” He gave me a blessing and a dollar bill as participation in this work and, indeed, I managed to translate that Abbreviated Code of Jewish Law into Farsi, in less than a year, and went on to translate several other classics.

I maintained a close connection with the Rebbe’s court, and came back many times after that. Every time I saw the Rebbe, I would simply become overwhelmed with emotion. I could scarcely look at his face, it was so radiant. I have personally witnessed his greatness, and I thank G-d that his emissaries are following in his footsteps and spreading his teachings throughout the world.