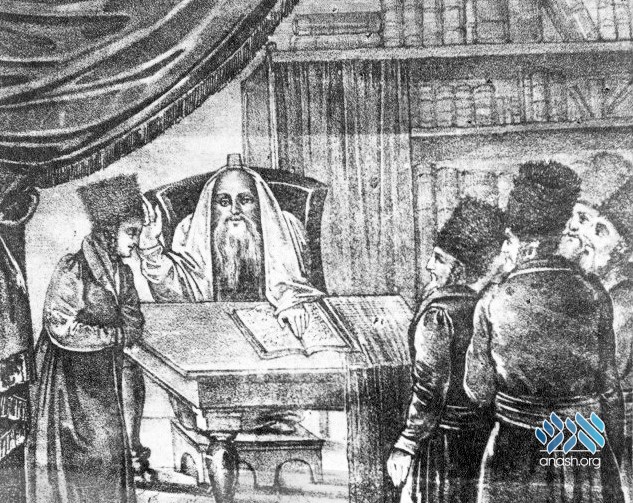 Drawing of the Maggid of Kozhnitz with his students from the early 19th century (National Library of Israel, Schwadron Collection)

Drawing of the Maggid of Kozhnitz with his students from the early 19th century (National Library of Israel, Schwadron Collection)

Motzei Shabbos Story: “Very few know of the secrets this book contains,” Rabbi Yitzchak Meir of Zinkov remarked to the gathered crowd. “In general, the true greatness of the Kozhnitzer Maggid has sadly gone unnoticed by the public.”

Once, Rabbi Yitzchak Meir of Zinkov spent Shabbat in the town of Kamenitz, Belarus. The normally quiet town overflowed with visitors, from chassidim of great stature to simple townsfolk. All wanted to see the great rabbi and hear his wise words.

During the morning Shabbat meal, Rabbi Yitzchak Meir asked for a copy of Avodat Yisrael, by Rabbi Yisrael Hopstein, known as the Maggid (Preacher) of Kozhnitz.

“Very few know of the secrets this book contains,” he remarked to the gathered crowd. “In general, the true greatness of the Maggid has sadly gone unnoticed by the public.”

Seeing that the book had not yet made its way through the packed throng, the Maggid continued, “My father [Rabbi Avraham Yehoshua Heschel of Apta] once instructed me to spend the Shabbat of Parshat Devarim in the Maggid’s presence in Kozhnitz.

“An incredible miracle, brought about by the holy Maggid, happened during my stay there.”

The crowd of chassidim leaned forward and strained their ears to catch every last word. After all, who doesn’t love a story?

“It had been ten years since Yaakov Baruch and his wife stood under the chupah, and they had still not been blessed with a child. Yaakov Baruch managed to mask his depression behind a face that radiated happiness. But it was a façade. Inside, he was a broken man. Leah, on the other hand, didn’t even attempt to appear self-possessed, living as a downtrodden shell of her former self. Her blank eyes reflected the agony that gripped her heart.

“One day, Leah’s close friend told her, ‘I’m surprised that you still haven’t done anything about your situation, preferring instead to mope all day with folded hands.’

“Leah turned to her friend. ‘What else could I possibly do? I’ve been to doctors, attempted countless segulot, and my Tehillim has long been drenched with my tears . . .’

“‘You have to visit the Maggid of Kozhnitz,’ her friend said gently but firmly. ‘Many have already seen wonders through his blessings.’

“When Yaakov Baruch returned home later that day, he found his wife’s face glowing with joy.

“‘What’s all this about?’ he asked cautiously.

“‘Soon, with G‑d’s help, we’ll have a child!’ she exclaimed enthusiastically. ‘I will travel to Kozhnitz and ask the Maggid for a blessing. I will not leave his house without his promise of children.’

“‘OK then,’ Yaakov Baruch said, his skepticism undetected by his wife.

“For weeks, Leah determinedly traveled the roads leading to Kozhnitz. Upon reaching her destination, she didn’t stop to rest from her difficult journey and instead made her way directly to the Maggid’s house. Striding up to the assistant, she described her woes and demanded to be let inside the Maggid’s room.

“Ever patient and respectful, the gabbai listened to her story and appreciated her determination to travel to Kozhnitz. ‘Listen to what I have to say,’ the gabbai said once she finished speaking. ‘Tomorrow is Friday. In the hours before Shabbat, the Maggid reads the Torah along with the commentary of Onkelos. I suggest that you take advantage of this powerful moment. Quietly come into his study and remain until he finishes reading. Then you can approach him with whatever you need, and we’ll see what happens.’

“To prepare herself for the long-awaited visit, Leah rented a room at the local inn and spent the night reading Tehillim, splattering the worn pages with her tears until she lay down to rest. At the earliest hint of sunlight, Leah rose, prayed and returned to her Tehillim.

“Around noon, Leah walked over to the Maggid’s house and stood outside his study. Inside, the Maggid was bending over a Torah scroll, as was his custom. Surrounded by his disciples, the Maggid read the text with a fiery passion. Without warning or a knock, the study door swung open and the woman was quietly ushered inside by the assistant. The Maggid remained fixated on his reading and didn’t hear the arrival of this new guest.

“After finishing the last verse, the Maggid lowered himself into a chair and requested to see the visitor. Leah presented herself silently.

“‘Yes,’ she said, somewhat surprised. She had never mentioned her name to anyone in Kozhnitz, much less the Maggid.

“‘You come here because you seek G‑d’s blessing of children?’

“‘Yes,’ replied Leah breathlessly. ‘That is my prayer and request.’

“‘If so, your salvation has already been spoken of in this week’s Torah portion, in which we read how Moses chides the people of Israel for being afraid to enter the Promised Land. “And your little ones, whom you said ‘for prey [they] will be,’” said Moses, they will be the ones to enter the land.’

“‘The word for “for prey” is lavoz, which is an acronym for Leah bat Zisel. Thus, we can read the verse as follows. And your little ones, for whom you have said that you wish a blessing, lavoz, for Leah bat Zisel, will be—G‑d will grant your request.’

“Leah’s eyes welled with tears of happiness. She retraced her footsteps and left the room, head still buzzing with the Maggid’s promise.

“And it goes without saying that Leah and Yaakov Baruch were blessed with a child.”

As Rabbi Yitzchak Meir finished his story, a hand emerged from the crowd and placed the book on the table. Picking it up, Rabbi Yitzchak Meir remarked, “Now that you have an inkling of the Maggid’s greatness, allow me to read a short passage from inside his book—true G‑dly wisdom!”

Adapted and translated from Sichat Hashavua #865