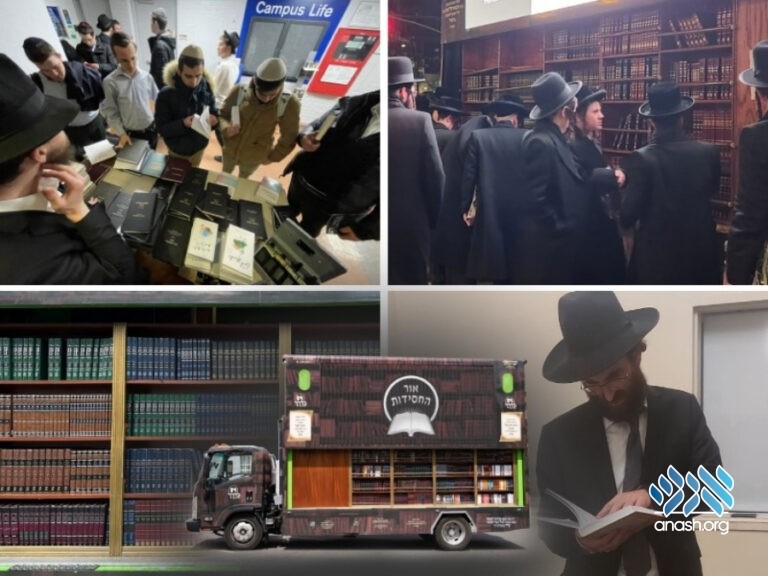 For the bochurim who spend Yud Tes Kislev selling Sifrei Chassidus in heimishe communities across New York, it’s not about numbers and sales. It’s about sowing a deep, life-altering awareness – and bringing the maayanos to the chutzah that is right next door.

Chassidic melodies blare from the speakers as the Baderech Seforim Mobile pulls up to its Boro Park destination; within minutes, curious onlookers are eagerly pulling seforim off the shelves and perusing their contents. Since Motzei Shabbos, groups of bochurim coordinated by Rabbi Mendy Winkler have been circling through heimishe neighborhoods, and hundreds of sifrei Chassidus are already in the hands of their new owners.

For these boys, spending Yud Tes Kislev driving a truck through New York and New Jersey and overseeing sales is a no-brainer. It may not be the most conventional choice – it means taking precious time from their usual schedule of learning and farbrenging on the Rosh Hashanah of chassidus – but selling Sifrei Chassidus in communities where they are not easily accessible is certainly an appropriate way to spend the day.

At a farbrengen on Shabbos Parshas Ki Savo 5745, the Rebbe described selling Sifrei Chassidus to a Yid who will now be able to learn from it as the final peulah that is needed to bring Moshiach. To that end, the sales this year have been a stunning success. Shelves that were stacked to the brim just hours ago are now bare, and storage manager Rabbi Sholom Glazman is working at a frenetic pace to organize and restock so that no one goes home disappointed this Yom Tov.

“In a letter from כ”ד סיון תשט”ז, the Rebbe wrote that spreading books of chassidus is an integral part of ‘lchsheyafutzu maanasecha chutzah,’” said Rabbi Avremi Mann, founder of Machon Ohr Hachassidus. “The Rebbe encouraged the letter’s recipient to push himself beyond his current capability by making a shturem about the urgency to learn Chassidus; the shturem itself is important! These words are the force that drives our work at Ohr Hachassidus.”

Of course, the shturem created by the Baderech Seforim Mobile doesn’t end with a spectacle on the streets and a successful day of sales. The life of a person who visits the truck and walks away with a sefer Chassidus, often for the first time, will never be the same. His world perspective, his understanding of Hashem and the Torah, his appreciation for a single mitzvah will continue to evolve, a well deep inside him bubbling over until the effects will be felt by his family, his friends and eventually his entire community.

Generations of Lubavitchers have worked tirelessly to bring the wellsprings of Chassidus to the furthest corners of the globe, with astounding success. It’s time to revitalize our efforts closest to home; this is the final frontier.