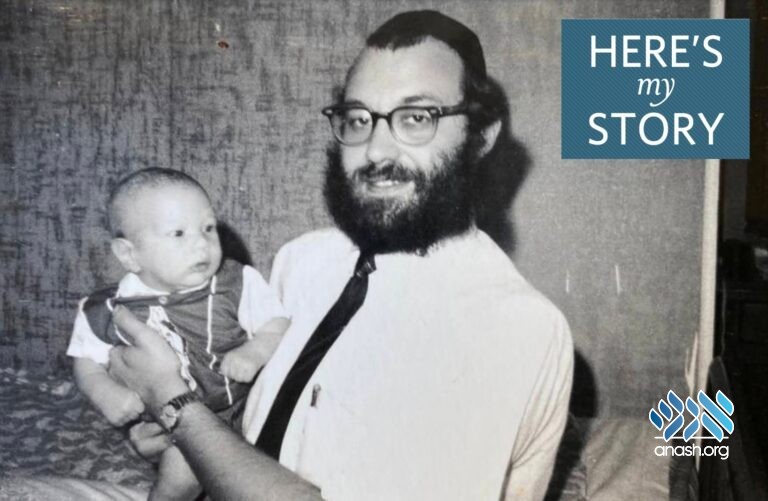 After a disappointing encounter during Merkos Shlichus, Rabbi Yaakov Eckhaus wrote to the Rebbe that it seemed too difficult to bring Moshiach. The Rebbe responded with an analogy to gunpowder.

Rabbi Yaakov Eckhaus has taught in the Lubavitcher Yeshiva for many years. He was interviewed in the My Encounter studio in June of 2021.

When I was growing up, I couldn’t stay in class. After kindergarten, my parents sent me to the Toras Emes yeshivah in Borough Park, Brooklyn, and I would come to school every day. But then I would insist that somebody come pick me up to bring me home. I guess I had class fright.

So in 1946 my parents decided to send me to the Lubavitcher Yeshiva in Crown Heights. My brother was there already, and they figured that my brother could come stay with me in the classroom if I needed.

Well, that didn’t work, and every day my mother had to be called down to Crown Heights. Rabbi Zalman Gurary was our principal, and he used to call up my mother and tell her, “Come pick up your son – he doesn’t want to sit in class!”

When it happened again and my father had to leave work to pick me up, he lost his patience. “Don’t send him there anymore,” he told my mother, “he is not able to be in yeshivah.”

My mother got very worried and went running to Rabbi Eliyahu Simpson, who was the secretary of the Previous Lubavitcher Rebbe. “Please,” she begged, “ask the Rebbe to bless my son to start wanting to learn.”

When Rabbi Simpson went to the Previous Rebbe and told him the whole story, he responded, “Please G-d, he’s going to want to learn.” And, after that, she had to come once or twice more, and that was it. Thank G-d, I started sitting in class and became a regular student. Without any question, it was because of that blessing.

When the Previous Rebbe passed away, his son-in-law became Rebbe and also helped me out at yeshivah. As a student in Lubavitcher Yeshiva, I was able to have an audience with him each year for my birthday.

Once, when I was fourteen or fifteen, I went along with my father to meet with the Rebbe. My father mentioned that traveling back and forth from Borough Park to Crown Heights each day took a lot of time, and suggested it might be better if I stayed somewhere closer to the yeshivah. The Rebbe agreed, and told my father that when the Alter Rebbe, the founder of the Chabad movement, was taking care of his baby grandson, who later became the third Chabad Rebbe (known as the “Tzemach Tzedek”), he would take his baby carriage into his study. “A kind darf shlofen in daled amos shel Torah – A child ought to sleep in the vicinity of Torah,” the Alter Rebbe had said.

So, the Rebbe had the yeshivah find a dormitory room for me, allowing me to sleep nearby. This was also helpful to me in another way. When I was in Borough Park, if I wanted to learn some extra Torah in my free time, I would have to go out looking for a quiet place, but living so close to the yeshivah meant that I always had a place to go. As a result, I spent more time studying Torah which really led to big changes in my life.

Another time, when I was in high school, I complained to the Rebbe that my homework and book reports were taking too much time away from my Torah learning. “I’ll speak with them about letting up on you,” the Rebbe said.

Pretty soon afterwards, Rabbi Mordechai Mentlik from the yeshivah called me in to say he’d spoken to Dr. Wadler, the English studies principal, and they’d agreed to let me off the hook with the book reports – but not the homework.

The summer after I graduated high school in 1958, I volunteered to take part in a program run by Merkos L’Inyonei Chinuch, the educational arm of Chabad, that sent pairs of yeshivah students out to far-flung Jewish communities across America.  At that time, I went with a friend of mine to Scranton, Pennsylvania. For a young man like me, it was quite an experience, going around from place to place distributing Jewish literature. We would try to find Jewish people wherever they were, and encourage them to put on tefillin or buy Jewish books.

One place we visited was a furniture store. It was a big place, and the owner, who seemed like a well-to-do guy, was Jewish. So we went inside and spoke to him for quite a while, and then I asked him, “Did you put on tefillin today?”

I explained to him how important it is to put on tefillin and this seemed to convince him. “Okay,” he said, “Let’s go to the back of the store to put on the tefillin.”

The building was very long, and I followed him to the back. But by the time we got there, he changed his mind, and didn’t want to put on tefillin anymore.

I tried prodding him a little more but he refused. “I’ll do it some other time,” he offered, “but not now.”

I was very disappointed since I had spent so much energy with this man who just brushed me off. So when we came back to New York, I wrote up a long report about the trip, and submitted it to the Rebbe. I described our meeting with this guy in the furniture store in detail since he had been my only prospect for putting on tefillin on that trip.

I then went on to address the Rebbe in the report, and remarked, “It looks like the Rebbe is trying to bring Mashiach, but I don’t see how it’s going to happen. It’s just too difficult: There are so many Jews who need to do so many mitzvot, but we didn’t even succeed in getting one person to put on tefillin.”

In the margin of my report, the Rebbe responded:

“There is a substance called gunpowder,” he wrote. “All you need for it to flare up is just a little spark. Sometimes, when you come into a town, you only need to inspire one influential person, and then he will get many others on board.

“You might encourage just one person to put on tefillin, or to change his ways, but he has a friend. And then that friend is in touch with other people, and so on. So getting your message across to one person can start a chain reaction.”

“Just one mitzvah can tip the scales to the other side and change the whole world,” he concluded. “That one mitzvah may bring Mashiach.”