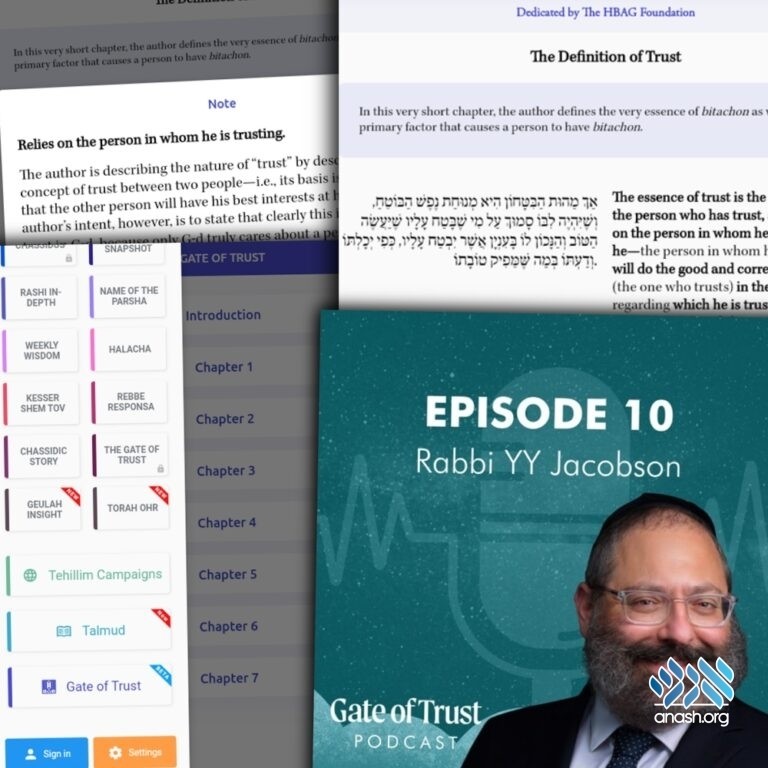 When Getzy and Alisa Fellig‘s firstborn son was diagnosed with cerebral palsy, they were encouraged by a letter where the Rebbe suggested the study of Shaar Habitachon. That was the start of a movement that brought the vital text to tens of thousands.

For the last eight years, Getzy and Alisa Fellig have carved out precious time each morning to read a page of Shaar HaBitachon – Gate of Trust. Over the years, they have completed the book around 15 times, both crediting their deep trust in G-d to this practice. Today, as a result of their generosity and partnership with Chayenu, there is a beautiful Fellig Edition of the text, complete with the first of its kind Chassidic commentary.

This summer, they went one step further. Every single individual now has easy access to this ancient wisdom alongside their text messages and overflowing inbox. Chayenu has launched the app version of the book, complete with all of the commentary found in the hardcover version.

The voyage to deep trust in G-d began fifteen years ago, when the Felligs were looking for guidance as they faced a major challenge in the early years of their marriage. Their firstborn son had just been diagnosed with cerebral palsy, and feeling out of their depths, they turned to the Rebbe, as Chassidim have for centuries. They visited the Ohel, the resting place of the Rebbe, and prayed for guidance and Divine assistance during this unexpected turn in the road. Afterward, they read a letter written by the Rebbe, addressed to someone who was feeling down and dejected.

The Rebbe suggested that the individual study Chovot Halevavot (for a deeper explanation of the text, see here.) The Felligs took heed, and made do with the hard-to-read available text, but it would take some time before they implemented it as a daily practice in their home. When they did, the impact was life-altering.

The book was written in the 11th century by Rabbenu Bachya Ibn Pikkuda. The text has been a reliable presence in every Jewish community since its early beginnings. Even in the earliest years of his leadership, the Lubavitcher Rebbe encouraged those who wrote to him with heavy hearts, those growing up in the post-war era, to study this text over and over, to build a new foundation of faith and trust, to gain direction in a world that had crumbled around them (Igrot Kodesh of the Lubavitcher Rebbe, vol. 21, p.131). With this knowledge, and having experienced the transformation in their own lives, and the way it had changed the way they perceived everything, the Felligs wanted to afford everyone access to the book, wherever they were. Most preferably, on the piece of technology, they had with them always.

“Many of us are tethered to our devices,” said Rabbi Yossi Pels, executive director of Chayenu, “but we have become increasingly fatigued by social media and other content that is distracting us. Having Shaar HaBitachon instantly accessible on your device can be a divine method to combat this and connect to a higher source.”

‘Gate of Trust in your pocket’ is not the only way that Chayenu has brought the ancient text to the modern front. One hot Shabbat afternoon in Houston, Texas, Felix Frydberg and his son Noah went to learn the Gate of Trust with Rabbi Mattisyahu Trusch at his home. While walking out, Felix thought of a great idea: “Matt, you should really make a podcast about the Gate of Trust.” Trusch laughed it off – “No way, Felix, why don’t you go ahead and do it!” After some back and forth, the two finally shook hands and agreed that they would make a podcast together, and the idea for “Gate of Trust Podcast with Matt & Felix” was born.

Matt and Felix brought the idea to Pels. Like so much of the Gate of Trust project from beginning to end, G-d’s hand was felt as He brought the necessary players together to make things happen. The Chayenu team had just agreed internally to the idea of launching a podcast, but they did not yet have the resources to get it done. The call came in at the exact right moment, Pels and the Chayenu team jumped on board, and Matt and Felix were on their way to hosting the Gate of Trust podcast, which interviews various guests who all share a common theme – their lives have been transformed from studying the Gate of Trust text.

Trusch lives and breathes the words of Gate of Trust, quoting passages and referencing chapters in conversation. When he asks someone if they have studied the book, Trusch knows based on their response just how well they studied it. When someone casually responds that they have, he thinks: “What you’re telling me is that you didn’t really learn it. Because if you had really learned and internalized it, you would have told me how much it has changed your life!”

He knows because it changed his.

And it changed the lives of everyone who Matt and Felix interviewed on the Podcast, and countless others. (Have a Gate of Trust miracle story to feature on the Podcast?)

So, what is so powerful about Gate of Trust?  The answer is different for everyone who studies it.

The book presents a challenge to its readers: how far can you go with your Trust? How little can you place your reliance on anything and anyone but G-d? (See the Gate of Trust, Chapter 7, to see how you rank on the 10 Levels of Trust.)  How much can you recognize G-ds inherent presence in your every breath, every feeling, every moment?

The Podcast is an opportunity to move away from the text for a moment, and to hear stories about the influence the book has had in real people’s real lives – heart-to-heart conversations with artists, entrepreneurs, scholars and laymen, who, by strengthening their Trust-in-G-d, despite all odds, experience outright miracles.

The Gate of Trust Podcast is the perfect complement to the book to take on your morning commute, your evening jog, or as you wash the dishes at the end of a long day. It is one more way to internalize the ideals laid out in the Gate of Trust, bringing the text one step further into the 21st century.

Visit GateofTrust.org, home base for the “Trust Revolution,” to find the content that speaks to your soul’s preferred learning style. Since its launch, hundreds of thousands of people have visited the site! Classes, videos, essays that span various lengths, languages, and depth are making these lofty concepts practical and real for an entire generation. With tens of thousands of downloads, and a robust user engagement, the Chayenu app, too, has become a force in the place where Torah & technology converge. There are over 25 unique Torah sections in the app, including Chumash, Tanya, Rambam, Talmud, and much more. And now, the Gate of Trust.

The website, the podcast and the app, they are all bringing ancient wisdom to the forefront of the modern world, a world that has progressed technologically but can still find great healing, transformation and growth in words written in the 11th century.

Fellig said, “if you are looking for an unbelievably simplistic and insightful way to start your day, something that will transform the way you think, operate, and how your life will actually play out – start here.”

The app version of the book is just the most recent step in the direction of bringing these words close to every person’s heart. People are struggling with anxiety, depression, misdirection, fear, and overwhelm, and the Gate of Trust has the secret to living a life free of all of it. Wouldn’t you want that in your back pocket?

The podcast can be found on gateoftrust.org/podcast and is available on Spotify, Apple Podcasts, GooglePlay or wherever you listen to podcasts. Episodes are released every other Tuesday.

Gate of Trust in the Chayenu native app is almost done and will be released later on this week.
To get the content now, visit web.chayenu.org.