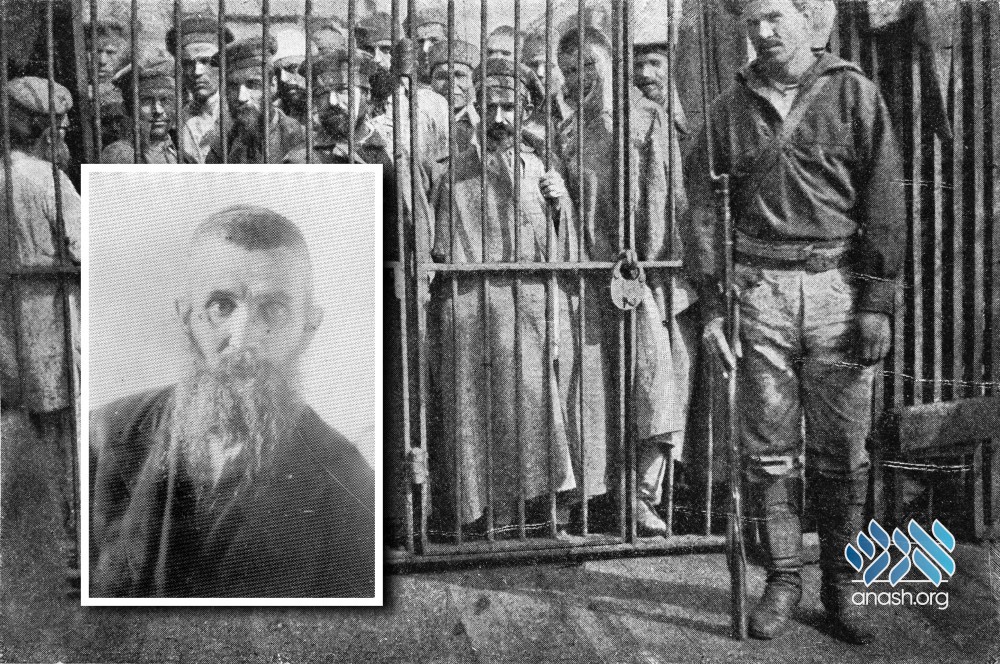 7 Elul is the yahrzeit of Reb Berel Levertov ‘Kabilaker’, a fiery chossid and ba’al mesiras nefesh, who passed away from heart failure after his beard was forcibly shaved in a Soviet prison in 5709/1949.

In the chronicles of Chassidim and their struggles under the Soviet tyrant, there were many “heroes.” Many who risked their lives and died al kiddush Hashem. In addition, the sacrifices made by their wives and children is indescribable. But it isn’t every day when we write of a chossid who died of heart failure when they forcibly shaved his beard in prison.

Such was Reb Berel Levertov, known among Lubavitcher chassidim as Berel Kabilaker.

Upon his birth near Kremenchug in 5645/1885, he was named after the Mitteler Rebbe. The family were proud chassidei Lubavitch who had left White Russia a while before and settled in Ukraine. A family tradition had it that they were descended from the Alter Rebbe.

Berel heard about the new Yeshivas Tomchei Tmimim in Lubavitch while learning in the Lomzher Yeshiva. Being from a strong Chabad background, made it a natural place for him. He soon left Lomzha and traveled to Lubavitch, spending the next six years there.

In Lubavitch, Berel toiled in Torah and Chassidus and enjoyed a special relationship with the Rebbe Rashab and the Frierdiker Rebbe. He was granted semicha and kabbalah to practice shechita, and after marrying Yenta Rivkah Sokolovsky, traveled to Kabilak to serve as the local rov and shochet there.

After a year or so in Kabilak, Reb Berel served in other towns, and even was drafted into the Russian Army, fighting during WW1 until the revolution, when the Russians left the war and made peace with the Axis powers.

After the war, restrictions were relaxed on where Jews could live, and Reb Berel and his family moved to Moscow, where it took all the creativity possible to avoid working on Shabbos. Reb Berel learned photography, as well as knitting and other professions to be able to work at home and on his own schedule and not desecrate Shabbos.

In Moscow, he was one of the chassidim who arranged shiurim and farbrengens for anash, as well as was active in arranging chadorim and yeshivos underground. Many of the great chassidim who visited Moscow on klal matters would stay in the Levertov home.

When the War came, the Levertovs escaped after Simchas Torah 5702/1941 on the last train out of Moscow. The early war years were spent in Ivanovka, a village in Bashkiria, a territory in the Ural region of Russia inhabited mainly by a Tatar tribe called the Bashkirs. There the family joined the collective farms, with all children working in order that they could earn some food and feed themselves.

Reb Berel did not manage to escape Russia. When the borders closed, there was an active manhunt by the KGB to find all those chassidim that were involved in attempting to escape. In the summer of 5707/1947, he was arrested with many others and accused of being part of a counter-revolutionary group lead by the Frierdiker Rebbe from New York.

In prison, Reb Berel was interrogated mercilessly to extract information about others involved in the work to keep yiddishkeit alive. From the official records of his interrogations (obtained from the KGB in later years) it is clear that he tried to mention as accomplices in his activities only Chassidim who had either left the USSR or had passed away.

While in prison, Reb Berel refused to shave his beard, which was mandatory for all prisoners. Years earlier, while in the hospital in Bashkiria, he would sleep with his hands tightly holding his beard for fear it would shaven by a nurse or doctor.

But in prison, he would have no such “luck.” There he was held down by guards while they forcibly shaved his beard. This was too much bear, for Reb Berel, and soon after his heart gave out, and he died in the arms of his friend Reb Chaim Zalman Kazliner, who somehow relayed the sad news to his family.

Despite her age and frail health, Reb Berel’s wife was not allowed to leave Russia until 5725/1965, when she emigrated to Australia to be with her daughter, Basya Gurevitch. She passed away in New York in Adar of 5730/1970.

His two sons, Moshe and Sholom, and daughter Basya, did manage to escape with the masses of Chassidei Chabad after WW2. The two brothers raised beautiful families in Crown Heights and have many descendants all over the globe. His daughter Basya was married to well known chossid, Reb Nochum Zalman Gurevitch of Melbourne.

(With gratitude to Chabad.org and “The man who mocked the KGB.”)