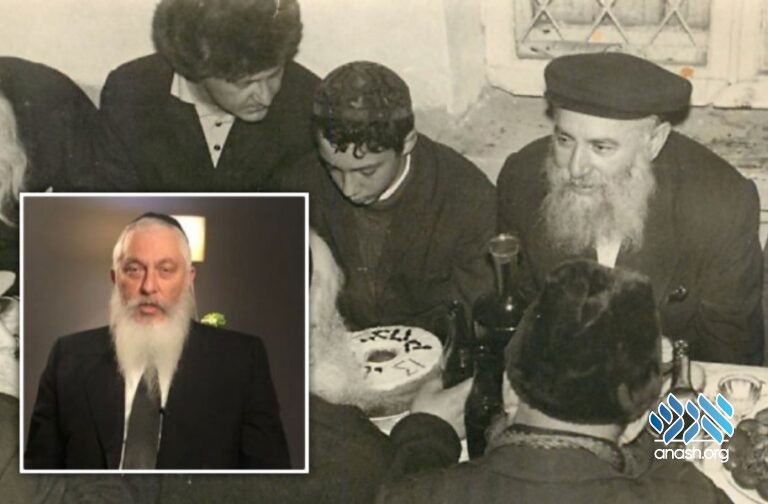 Rabbi Yoseph Yitzchak Zaltzman tells of his childhood years in the Soviet Union, where his parents made him ‘disappear’ to keep him out of Communist schools.

Since 1980, Rabbi Yoseph Yitzchak Zaltzman has served as a Chabad emissary in Toronto where he founded the Jewish Russian Community Centre of Ontario. He was interviewed in October of 2021.

I was born in 1956 in a city called Dushanbe, the capital of Tajikistan, 1,500 miles from the Lubavitcher communities in Tashkent and Samarkand, in Uzbekistan. In order to immerse in a mikveh, my mother had to take a thirty-six-hour train ride, each way, to Samarkand.

My parents had only come to Dushanbe for a business opportunity, so we didn’t stay for long, and I grew up between Samarkand and Moscow, where my grandparents lived. My parents had six children in Russia, which was such an achievement that the government gave my mother a medal. She was called a “Heroic Mother,” and received eleven rubles every month to buy additional milk.

Every child in the Soviet Union had to go to a government school. It was mandatory. If parents were caught not giving their child a communist education, it was three years of jail, and up to twenty-five years if they decided to take it to court. During that time, their child belonged to the government, and would be sent to grow up in government institutions.

So, when I came of age, my parents told me, “We want you to continue in yeshivah and we don’t want you to go to the Russian school.”

“Well,” they continued, “for that, you will have to disappear.”

What does it mean to disappear? It meant that, starting from September until mid-June, when children are in school, you cannot go outside or near the window. Nobody can know that you exist.

And that is what I did.

In 1971, my father’s application to leave the country was finally accepted, and we were able to go to Israel. On the way out, at the border, they found my mother’s medal.

“You have to leave that here,” the guards said. “This medal belongs to Russia.”

I went to the Chabad yeshivah in Lod for three weeks, but when I heard that my father was traveling to the Rebbe for the High Holidays, I made up my mind that my parents needed to buy me a ticket too. “I am also going to the Rebbe,” I informed them.

I flew with my father, and for the first few days I was overwhelmed by what I was seeing: The Rebbe, 770, the chasidim. It was something we had longed for as little children; our dream was to see the Rebbe. At every chasidic gathering in Russia, the other chasidim used to wish my father: “May you leave Russia, so your children will see the Rebbe and attend his schools!”

That year, in addition to attending the prayers and gatherings in 770, I was able to meet the Rebbe, in his room, three times.

The first was the day after Yom Kippur. When I came before the Rebbe, my heart was racing. He took the note I had prepared in advance and read it quickly, while making marks on it with his pencil.

“Because your parents made such sacrifices for your education,” the Rebbe told me, “may you be successful in learning Torah, and in performing mitzvot in the most complete way.”

Later that same month, I was standing in 770 when suddenly there was an announcement: The Rebbe wanted to see everyone who had just came out of Russia.

We gathered in front of the Rebbe’s room, and Rabbi Hodakov, the Rebbe’s secretary, let us in. The Rebbe was sitting at his desk, with his glasses on, peering into a book. “Is everybody here?” he asked. There were about thirty of us, so it took a few minutes for everyone to come.

When Rabbi Hodakov confirmed that everyone was present, the Rebbe took off his glasses, closed the book, and looked up at us. “I want you to go and see Reb Moshe Feinstein.”

Reb Moshe was the greatest Halachic authority of his time, but coming from Russia, I had never even heard of him before. “Go, and tell him the way it was,” the Rebbe instructed. “And don’t be humble about it. I want him to know how the chasidim survived in Russia.”

We left the Rebbe’s room, and went straight into a few cars that were waiting outside. One of them was the Rebbe’s car, which is where I sat, in the back seat.

We arrived at Reb Moshe’s home and sat with him on a few couches. First he spoke with the adults and then moved on to us younger boys: Myself, Yosef Yitzchok Mishulovin, and Shmuel Notik.

“What have you been studying?” he asked us.

We had been learning the chapter Ha’omer, from Tractate Kiddushin of the Talmud, and he began by asking us a few questions about the Mishnah there. When I answered, I saw that he took out a handkerchief and began wiping his eyes. My first thought was that I had offended him somehow.

Somebody told him that Reb Yankel Notik, Shmuel’s father, knew the entire Talmud.

“Is it true?” he queried, turning to him.

“It’s only half,” somebody interjected, “but whatever you’ll ask him will turn out to be in the half that he knows.” Reb Moshe smiled.

He then posed a question to the group. “How did you do it?”

Reb Moshe was himself from Russia, and he knew what it meant to be religious there.

Fifty years after he left, he was seeing people come out of Russia as if Communism didn’t even exist. We were fully religious, speaking fluently about the Talmud, Rashi and Tosafot in Yiddish. He was overwhelmed.

Reb Yankel Notik responded: “How did we do it? Did we have a choice?” In other words, for us, being a Jew is not a choice; there are no alternatives.

My third audience with the Rebbe was a few months later. Although my parents wanted me to return to Israel with my father, I managed to get accepted to a yeshivah closer to the Rebbe, in Morristown, New Jersey, and eventually they let me stay there. So, I was able to come see the Rebbe on the occasion of my birthday.

I had another audience with the Rebbe on the same date the next year, and then again a year after. About a month before one of those audiences, I had decided to study in the yeshivah on my own, without a partner, thinking it would be easier to stay focused that way. I had not mentioned anything about this decision to the Rebbe, so I was stunned when he told me, “In general, it’s better to learn with someone else than on your own.” Needless to say, when I got back to yeshivah, I found myself a study partner.

The Rebbe also told me to serve as a role model for others, but at one point I felt myself becoming a little too proud of my spiritual progress compared to that of my peers. I decided to ask the Rebbe what to do with those thoughts.

The Rebbe answered with two methods for dealing with thoughts of arrogance or superiority. First, to reflect on what it says in Tanya about how G-d stands over each person and examines his conduct. This way, the emphasis becomes whether one is serving G-d properly.

A second way is to say, “If I am so great, that means I have to perform much better!” Once these methods start to have a positive effect, you’ll stop being bothered with such thoughts.