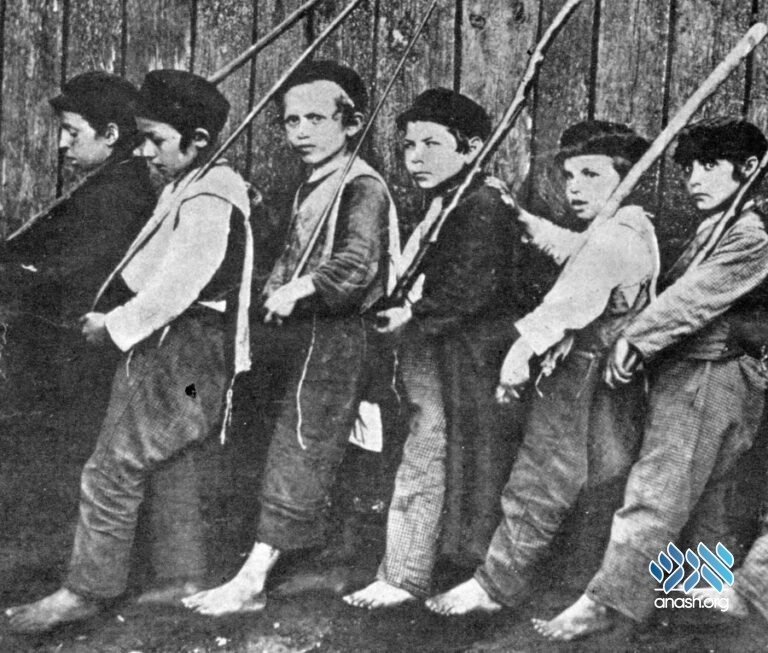 R. Yisrael Nachman Mariasin (d. 5674) was a chossid of the Tzemach Tzedek, Rebbe Maharash, and Rebbe Rashab. Born in Dubravna, he was kidnapped at age seven-and-a-half for Russian army service as a Cantonist, but was freed through the ‘Chevras Techiyas Hameisim,’ established by the Tzemach Tzedek. The Tzemach Tzedek then sent R. Nachman to study under R. Hillel Paritcher, which he did for eighteen years, and he worked as a melamed. He had a very close relationship with the Rebbe Maharash, and in his later years lived in Lubavitch and served as the Rebbe Rashab’s gabbai for yechidus.

R. Nachman was good-hearted but stern, and he was in charge of admitting chassidim to yechidus. A lamdan in both nigleh and Chassidus, the Rebbe Rashab refrained from asking him to do any household work, and would say, “Nachman is a fine yungerman.” He was paid 5 rubles a week, and when guests gave him tips, he would put it in a pushka in the Rebbe’s room.

He once observed how every year-and-a-half, the Rebbe Maharash would speak in his maamorim about how the world itself is Elokus. The reason for this, he explained, was to purify the air.

R. Nachman was a “Pesachdiker,” meaning that he would visit the Rebbeim for Pesach every year, and he recorded many insights that he heard at the sedorim.

At the Rebbe Maharash’s seder, the guests sat with immense derech eretz and read the Haggadah quietly until the Rebbe Maharash instructed them to read it aloud. He witnessed “Baal Shemske” practices by the Rebbe Maharash, who once asked all those present to step out, leaving him alone in the room for some time.

On another occasion, the Rebbe Maharash said, “On Pesach, one can jump on the wagon. What a simple person can accomplish through reading the words of the Hagaddah with simplicity, a maskil and oved cannot accomplish with the fifteen segments of the seder.” When R. Nachman recounted this before the Rebbe Rashab, his eyes flowed with tears.

R. Nachman once shared a scolding he had gotten from the Rebbe Rashab:

A bochur, who was called for army draft, went into yechidus and presented the Rebbe with his two options of where to appear for the draft, enumerating the advantages and disadvantages of each. The Rebbe chose one and the bochur walked out.

Upon exiting, the bochur suddenly realized that he forgot to mention an important advantage in the other place, which he believed would cause the Rebbe to change his advice. R. Nachman refused to allow him back in, but offered to relay the message himself.

Upon hearing the message, the Rebbe became serious and said, “Why do you ask again? If I said it, then that’s it, and there’s no need to ask again!”