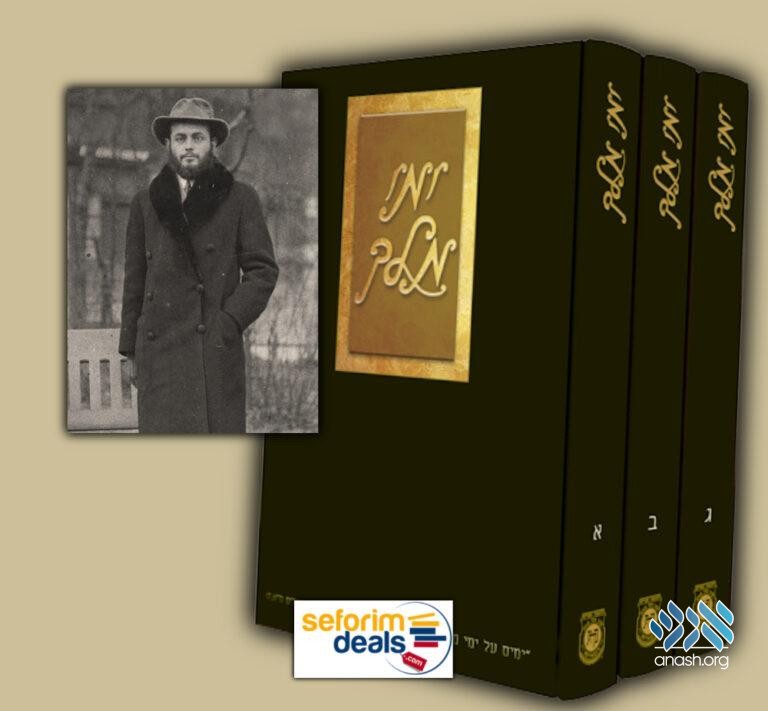 New Feature on Anash.org: “A Look Inside the Book”, presented by Anash.org and SeforimDeals.com, takes a look at what’s new in the shelves of Seforim stores. This week – the recently reprinted Yemei Melech remains a classic, but some expected a revision instead of a reprint.

The past decade or so has seen an explosion of interest in the life story of the Rebbe, with a number of biographies published. Some of these biographies have been friendly and factually accurate and others less so, but the chassidishe readership hasn’t been comfortable with any of them.

The reason for this discomfort is because the very genre of “academic” biographies is incompatible with chassidishe sensitivities. An academic style biography seeks to subject the Rebbe to analysis and define him, while a chassid strives to subject himself to the Rebbe and have the Rebbe define him.

Yemei Melech is not a “biography” of the Rebbe, as its author, Rabbi Mordechai Menashe Laufer, emphasizes in his introduction. Rather, it is an account of events and episodes in the Rebbe’s life until he accepted the nesius. It doesn’t profess to analyze or “define” the Rebbe, only to present the available information about the Rebbe’s early years with the purpose of inspiring its readers to strengthen their relationship with the Rebbe and learn from him.

The first volume of Yemei Melech covers the years 5662-5701, from the Rebbe’s birth until his arrival in America. This volume begins with setting the background for the Rebbe’s life by introducing us to his illustrious ancestors, such as Harav Avraham David Lavut, Harav Meir Shlomo Yanovsky and Harav Baruch Schneur Schneerson, and then the Rebbe’s parents, Harav Levi Yitzchak and Rebbetzin Chanah. From the Rebbe’s birth we are led step by step through the Rebbe’s life: His youth in Nikolayev to Yekatrinoslav (Dnepropetrovsk), in the court of the Friediker Rebbe in Rostov and Leningrad, the chasunah in Warsaw, and the subsequent years in Berlin and Paris. Volume 1 concludes with the story of the Rebbe’s miraculous escape from Nazi Europe and arrival in America.

Volume 2 of Yemei Melech covers the years 5701-5707. This volume focuses on the story of the Rebbe’s extensive work advancing Torah and chinuch as the head of Machane Yisrael, Merkos L’inyonei Chinuch, and Kehos.

Volume 3, covering the years 5707-5711, begins with a chapter about the Rebbe’s three-month visit to France to meet his mother, Rebbetzin Chanah and bring her to America. We then read about the historic events from the histalkus of the Friediker Rebbe until the Rebbe’s eventual full acceptance of the nesius a year later. The volume concludes with a chapter dedicated to Rebbetzin Chaya Mushka.

The research of Yemei Melech is highly impressive. The sources of information range from Rebbetzin Chanah’s diaries, the sichos and letters of the Friediker Rebbe and the Rebbe, to accounts of childhood acquaintances of the Rebbe published in obscure secular newspapers. To this already published material the author adds many previously unpublished stories that he and others transcribed from elder chassidim and other people that encountered the Rebbe during the relevant period.

Worthy of special mention is the extensive interview conducted with Dr. Meir Shochetman who was very close with the Rebbe in Paris, and even learned with the Rebbe regularly as a chavrusa (vol 1, ch. 12). Interviewed in hospital on his deathbed, Dr. Shochetman shed much light on this era of the Rebbe’s life about which very little is known. The interview with Rabbi Shlomo Rapoport who was present at the Rebbe’s chasunah in Warsaw is also worthy of mention (vol. 1, ch. 10).

All of these sources are woven together into a coherent and engaging narrative presented in a warm chassidishe style. Every piece of information is meticulously sourced in the footnotes, and analyzed and compared with other accounts for accuracy. As a result, Yemei Melech has served as the starting point for all subsequent research into the Rebbe’s early life.

This three volume classic was written over 30 years ago, but despite the many years that have passed since its publication, it remains the only comprehensive account of the Rebbe’s life written from a chassidishe perspective. JEM’s Early Years (2016) is an excellent collection of documents and testimonies, but by design it doesn’t weave them together into a story, merely presenting the raw information like a research file. Rabbi Zalman Ruderman’s Chad Bedara (2015) is also a very good book about the Rebbe’s full life and activities written for a frum audience, but it is far less comprehensive, with 200 pages covering the period of 5662-5711, compared with the 1278 pages of Yemei Melech on the same period.

Despite Yemei Melech’s enduring value, the decision to reprint it 30 years later without any changes is very puzzling. In the time since its original publication, a wealth of new information has been published, shedding much new light on this period of the Rebbe’s life.

These new sources often validate stories published in Yemei Melech. For example, in Yemei Melech vol. 2, p. 892 an incredible story is related about a dream the Friediker Rebbe had in which his father the Rebbe Rashab told him that there is a light shining in his house at night—the Rebbe. This story is validated by the Rebbe himself in Reshimas Hayoman (p. 294), with a date and additional details. Yemei Melech vol. 1, p. 330 relates the story of an unusual test given to the Rebbe in Berlin by Rabbi Yechiel Yaakov Weinberg on the contents of a kuntres he authored, which the author surmises may have been Rabbi Weinberg’s kuntres Pinui Atzmos Meisim. The publication of the Rebbe’s comments on this very kuntres in Reshimos, choveres 127 confirms this account.

Newly available information also correct a number of mistakes in Yemei Melech. Yemei Melech, vol. 1, p. 69 stated that the Rebbe’s brother Reb Yisrael Aryeh Leib was born in 5605, but the author has since discovered and published the original birth certificate with the date of Iyar 21, 5606. The report in vol. 1, p. 233 that the Rebbe authored a comprehensive work on the Alter Rebbe’s siddur can also now be considered inaccurate.

Recognizing the need to update the series and incorporate all of the newly published information, the author of Yemei Melech has been working for years on a comprehensive new edition of his classic work (see JEM’s Early Years, p. 94). This new edition has apparently been stalled in recent years, and the questionable decision to reprint the now outdated original edition all but guarantees its long term cancellation because the market for it has now been swallowed by the reprint.

In summary, Yemei Melech was a groundbreaking work in its time, is still the best in its genre today, and due to the dubious decision to reprint it will remain so for the foreseeable future.

Yemei Melech can be purchased at SeforimDeals.com.
Free shipping on all orders $47 and up in the US!