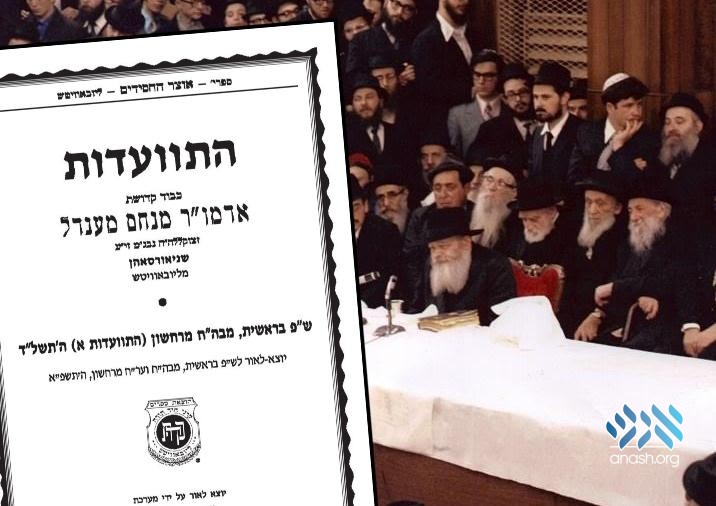 At a rare second farbrengen at the conclusion of Shabbos Breishsis, the Rebbe shared the background to the niggun of Hoaderes Vihaemunah he had recently taught. The entire farbrengen is now being published for the first time.

The diaries that document Simchas Torah 5734 (1973) contain the following description:

On the eve of Simchas Torah, during Hakafos, the Rebbe honored the French guests with a Hakafah, led by their Shliach, Rabbi Shmuel Azimov. They all crowded into the middle of the Shul, where they recited the Pesukim of the Hakafah and sang several nigunim with the Rebbe’s encouragement.

Suddenly, the Rebbe took his siddur and approached the edge of his Bimah, facing the direction of the guests. In a loud voice, he began to sing the words of Hoaderes Vihoemunah to the tune of La Marseillaise, the French national anthem. Most of the crowd did not recognize the tune, but the French chassidim – recognizing the tune – erupted in excited song and dance. At the conclusion of the Hakafa, the Rebbe beckoned for them to come to his Bimah. They were handed cups of l’chaim and the Rebbe wished each one l’chaim v’livrachah.

The bochurim danced until morning to the new tune which the Rebbe had connected to Hoaderes Vihoemunah and sang it with gusto the next morning during Shacharis. Those were the days of the Yom Kippur war, and this was only one of the unique occurrences of that Tishrei.

During the Farbrengen on Simchas Torah, the Rebbe asked to announce that an additional farbrengen would take place before the close of Shabbos Bereishis, after which he would distribute Kos Shel Bracha. After Maariv that night, as the Rebbe left the Shul, he began to sing Ufaratzta to the tune of Vesamachta.

At the start of the first Farbrengen the next day, the Rebbe explained why he chose to sing that Niggun.

“After Kabolas Shabbos last night,” the Rebbe said, “I questioned whether to begin singing Vesamachta .. I therefore had the idea to sing the same tune with different words.”

At the close of Mincha following that Farbrengen, the Rebbe began singing that Niggun again.

That evening, the Rebbe held a second Farbrengen. For forty-seven years, almost no record of the Farbrengen was available. Only several pages were available in Sichos Kodesh. The Farbrengen began at 5:50pm and went close to midnight – after which the Rebbe benched, davened Maariv, recited Havdalah and distributed Kos Shel Bracha. The vast majority of the farbrengen was not available.

This year, Lahak Hanochos has published the Farbrengen in its entirety, presenting six (!) Sichos for the very first time. The transcript was written during the farbrengen by Rabbi Zev Katz, who privately recited Havdalah and jotted down the Sichos. The hanacha was recently discovered in his archive. In this merit, may Hashem bless him with a speedy recovery.

During this Farbrengen, the Rebbe explained the events of Simchas Torah night, when he had taught the niggun of Hoaderes Vihaemunah. The Rebbe referenced the fact that the Alter Rebbe had adopted Napoleon’s March, which has since become a Chabad niggun sung at the holiest moments of Yom Kippur.

“This is also the reason behind the novel song introduced during an eis ratzon of Simchas Torah (as in the well-known saying, ‘on Simchas Torah shadt nisht, it won’t cause any harm’) – their tune, which represents the identity of France as it was seen by Napoleon, turning it into a song of holiness, a song which will be sung when Jews are involved in Yiddishkeit, Torah and Mitzvos, both for themselves and for their surroundings in a manner of uforatzta, with excitement, enthusiasm and joy, becoming a march of victory. We chose to sing it with Hoaderes Vihoemunah, words that follow the order of the Alef Beis and are printed in the Siddur, making it easy to remember. May we soon go with a victory march to greet Moshiach Tzidkeinu in our Holy Land…”

At the end of this special Sicha, the Rebbe called over Rabbi Azimov (the ‘grand rabbin’) and gave him a bottle of mashke to distribute to the guests from France, as well as a part of his Challah for the female guests in the Ezras Noshim. The Rebbe noted with a smile that it was not customary to give mashke to women, and that there is a saying in Russia that wheat can be made into mashke and into bread as well…

Afterwards, the Rebbe asked the guests to stand together and sing the new song. Some of them began to sing without words, so the Rebbe asked that they be given siddurim to follow along. At the conclusion of the song, the Rebbe spoke a short Sicha in French, explaining the meaning of the song – “To make a revolution against the Yetzer Hora, as soon as possible, in a joyful way, with the enthusiasm of Hoaderes Vihoemunah lichai olamim” – and blessed them to greet Moshiach speedily. Again, the Rebbe began to sing Hoaderes Vihoemunah, and the entire crowd joined in enthusiastically.

The third portion will be published for Shabbos Vayera, Chof Cheshvan 5781.