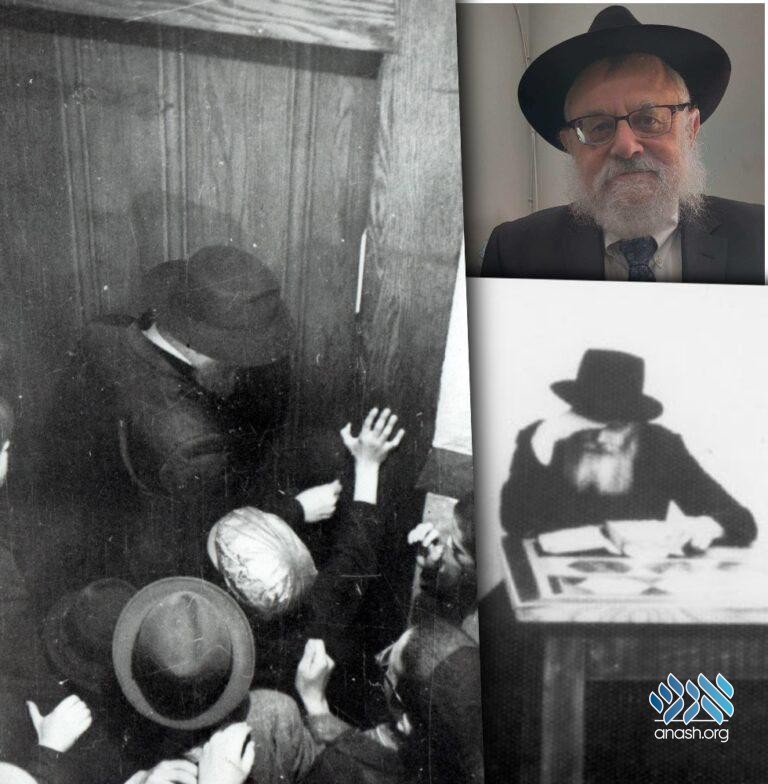 50 years ago, a group of student shluchim presented the Rebbe with a special gift – the Baal Shem Tov’s Tefillin. Rabbi Shmuel Kaplan shared his memories of the event at a farbrengen, transcribed here by Rabbi Bentzion Elisha.

As told by Rabbi Shmuel Kaplan, head Shliach of Maryland and transcribed by Rabbi Bentzion Elisha

When we merited presenting the Baal Shem Tov’s Tefilin to the Rebbe, he took the opportunity to intentionally reveal something to us that he kept well hidden from the public eye.

The story of the revealed ‘secret’ starts with a Lubavitcher from Montreal named Reb Zalman Gurevitz.

He was clean shaven, but nevertheless a Chosid, a very accomplished one who helped establish Beis Rivkah school in Montreal. In addition to his local efforts, the Rebbe sent him to the Soviet Union on special secret missions. On one of those important trips he met one of the Kluwgant brothers who happen to be related to the Rebbe. This Chosid was childless and he had two priceless family heirlooms in his possession which he wanted Reb Zalman to take with him out of Russia so that they would not get lost.

One family treasure was a pair of the Alter Rebbe’s Tefilin, which he asked to be given to the Rebbe. The second heirloom was a pair of the Baal Shem Tov’s Tefilin which he wanted to be given to his brother, Reb Isser Kluwgant who lived in Australia, as a Pikadon, safekeeping deposit. If he wouls be able to get out of Russia he would reclaim them but if he died, his brother would inherit them.

When Reb Zalman brought back the Alter Rebbe’s Tefilin to the Rebbe, they were made available to the Bochurim, the rabbinic students. Individuals were allowed to come and kiss the special Tefilin on the allotted daily time on the condition that they went to the Mikvah beforehand. They were not allowed to put them on; they were only allowed a kiss.

There was one clever Bochur, Holtzman, who didn’t settle for just a kiss and took this opportunity a step further. He brought with him some tinfoil and when it was his turn to kiss the Alter Rebbe’s Tefilin, he placed the tinfoil over the head Tefilin and gently pressed against it. The unique shape of the letter Shin on the Tefilin was engraved onto the tinfoil. Afterwards he shared this preserved shape with others. It was widely copied and is still used to this very day on Lubavitcher head Tefilin everywhere.

Interestingly, this open access to kiss the holy Tefilin was short lived and it was stopped as suddenly as it was made available. The quick action and foresight of this Bochur helped preserve and publicize previously unknown details of the Alter Rebbe’s head Tefilin.

Meanwhile, the second pair of Tefilin, those of the Baal Shem Tov, were sent to Reb Isser in Australia as his brother had requested.

When he received them he had them checked by a Yeke Sofer who instead of leaving these sacred artifacts of the Baal Shem Tov alone, decided to paint them.

Unexpectedly, Reb Isser’s brother died and now the Besht’s Tefilin in his possession sparked controversy. Chasidim who knew the inside story, including us the Bochurim who were on Shlichos to Australia at the time, felt that it would be appropriate for the Tefilin to now be given to the Rebbe.

What did Reb Isser need the Tefilin of the Baal Shem Tov for?  Reb Isser’s brother gave it to him as a Pikadon for himself, but now it has become a Yerusha, an inheritance, rightfully, an inheritance to be given over to the Rebbe, we thought.

Would he accept them? Were they authentic?

Although they were a family treasure, nevertheless, he had his doubts as to their authenticity and he knew the Rebbe would be able to sense the truth.

(The Baal Shem Tov had several Tefilin in his lifetime. He used to wear Dakos, a more refined type that would easily wear out and need replacement. As a result he had several pairs throughout his lifetime.)

The timing of this episode coincided with the end of our two year Shlichus to Melbourne, Australia, on Nissan 5731, 1971. We now were to fly back to New York and besides the memories of our experiences there we were bringing back a great treasure to personally present and deliver into the Rebbe’s hands. We were very excited.

We arrived back to Crown heights on the 10th of Nissan and soon thereafter we received a message from the Rebbe via Rabbi Binyamin Klein regarding when to bring him the Tefilin.

“Sheyimseru es Hatefilin Lemachar Achar Hatefila.” ‘The Tefilin should be given over tomorrow (the 11th of Nissan) after the (morning) davening’.

The next day, on the auspicious day of the 11th of Nissan, we had our meeting with the Rebbe right after the conclusion of his morning prayers, at 2pm!

We were invited to enter the Gan Eden Hatachton, where the Rebbe greeted us while leaving the door to his office open a little. The Rebbe exuded a warm friendly aura, smiling widely as he gave each one of us a general letter, a recently published Sicha on Pesach as well as a ten dollar bill.

His happy demeanor quickly evaporated though as the conversation changed to the Tefilin of the Baal Shem Tov. As he approached the Tefilin being held by Heschel Greenberg, his face became pale white, and an awe like we saw on the Rebbe’s face on Yom Kippur overtook his face, altogether erasing the smile he had just seconds ago. The Rebbe scooped the Tefilin with both his hands and brought them closer to his chest. He then stepped backwards to his office, all the while holding them close to his heart and then once he entered his room he closed the door with his foot!

The display of reverence and awe towards the Tefilin by the Rebbe removed any doubt of authenticity. They were real!

This was the dramatic conclusion and climax of our two year Shlichus to the land down under.

Nevertheless one detail of this encounter stands out in my mind as noteworthy and especially extraordinary.

Why did the Rebbe specify that we should meet him after his morning prayers which happened to be at 2pm? He could have just told us to come at 2pm and that’s it, but he didn’t. The Rebbe clearly highlighted that we should meet after his prayers, his morning prayers. He was revealing to us deliberately, for whatever reason, that his davening lasted for many many hours, until 2pm, to be exact.

In the earlier years of his Nesius, I remember how the Rebbe used to act as if he was davening with the Minyan in public, most times. Back then we knew how to tell when a Farbrengen would be taking place (mostly on Shabbos Mevorchim); he would actually daven with the Minyan on those Farbrengen days, you could see it.  Most other times though, he would be pretending to be davening with the Minyan, to the extent that he would gather his Tzitzis for Baruch She’Amar and the Shma prayer as well as step backwards and forwards for the Shmone Esre prayer.

Even though he made believe he was on pace with the others, if you paid attention to it, in the upstairs Zal Minyanim, you could see he wasn’t. Afterwards, he would go to his room and continue to daven, for hours.

I used to hang out outside of the door of his office and listen to him daven alone in his room for a long time. Despite this ‘hiding’, since 770 was my playground, so to speak, I heard his inspired devotional davening behind his public ordinary pretense.

All this though was hidden and unspoken, a secret so to speak.

On the occasion, when we gifted the Rebbe with the special Tefilin of the Baal Shem Tov, the Rebbe gifted us back with this personal acknowledgment of his lengthy davening, purposefully pushing us to get into our own davening by revealing to us his ‘secret,’ making sure that we know…

On that day, by his personal example, the Rebbe enriched us with a quiet lesson that spoke volumes, highlighting the great value he held for one’s marinating with the words of prayer.

· Rabbi Shmuel Kaplan is a noted Torah scholar and lecturer. He is the director of Chabad-Lubavitch of the Maryland Region, a board member of Merkos L’Inyonei Chinuch, the international educational arm of Chabad-Lubavitch, and of the Jewish Learning Institute. Rabbi Kaplan serves as the spiritual leader of The Shul at the Lubavitch Center in Baltimore, Md., and has hosted radio and television shows for more than 35 years, including hosting the acclaimed weekly radio show, “Awake, Alive, and Jewish,” and co-hosting the weekly cable program, “Diana, Mike, and the Rabbi.”

He conceived and brought to press the inspiring series, “Siddur Illuminated by Chassidus”

· Rabbi Bentzion Elisha is the author of the contemporary soul story book, “18 Frames of Being”