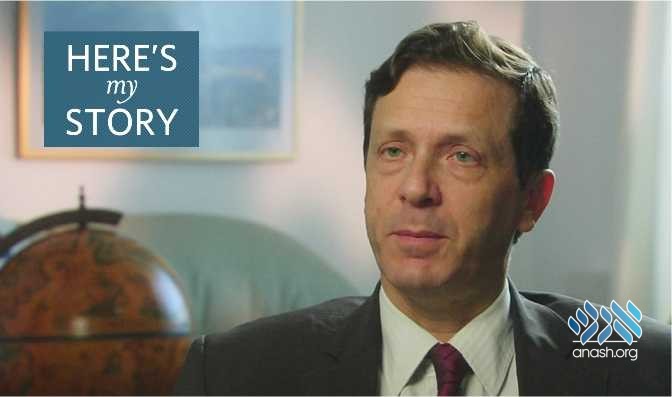 Mr. Yitzchak Herzog recalls his visit to 770 one Simchas Torah with his father, Chaim Herzog, who was then Israel’s Ambassador to the United Nations.

Formerly the chairman of Israel’s Labor Party and presently the chairman of the Jewish Agency, Mr. Yitzchak Herzog is the grandson of Rabbi Yitzchak Isaac Herzog (who served as the chief rabbi of Ireland and later as chief rabbi of Israel), and the son of Chaim Herzog (who served as Israel’s ambassador to the United Nations and later as its sixth president). He was interviewed in his Knesset office in Jerusalem in February of 2010.

The first time I became aware of the Lubavitcher Rebbe was during the Six Day War of 1967. I was six years old then, and my mother told me excitedly: “We received cake and wine from the Rebbe!”

These gifts were accompanied by a letter, which I still have, blessing and complimenting my father, General Chaim Herzog, on his actions at that time. My father became very famous, before and during the war, as the national commentator, speaking three times a day on Israeli radio to calm the people and explain the situation facing the nation.

When the cake and letter from the Rebbe arrived, I asked my mother: “Who is the Lubavitcher Rebbe?” and she told me. Afterwards, I came to hear the Rebbe’s name frequently, as we would receive letters of good wishes from him before various Jewish holidays.

I first met him in 1977, two years after my father was appointed Israel’s ambassador to the United Nations, when we were invited to join Chabad for Simchat Torah celebrations.

By then my father was world renowned for his defense of Zionism during the UN debate which ended with the UN adopting the infamous resolution branding Zionism as “a form of racism and racial discrimination.”

My father registered Israel’s vehement opposition to this resolution by standing before the General Assembly, ripping the document in half and declaring: “For us, the Jewish people, this resolution based on hatred, falsehood and arrogance, is devoid of any moral or legal value. For us, the Jewish people, this is no more than a piece of paper and we shall treat it as such.”

I was only a teenager at the time these events took place, but when given the opportunity to accompany my father and a group of Israeli diplomats to celebrate Simchat Torah with the Rebbe, I decided to tag along.

The synagogue where we met the Rebbe was a sight to behold. It was packed with people but my father and I were privileged to be invited to join the Rebbe at the front.

Before the dancing with the Torah began, the Rebbe had a long conversation with my father about geopolitics and international relations. They spoke about my father’s fight to defend Israel in the UN, and the block of countries that automatically vote against Israel in every instance. They also spoke about the fight against terror and about the quest to unite Jerusalem and extend Israeli sovereignty over Hebron, the site of the Cave of the Patriarchs (Me’arat Machpelah) – where Abraham and Sarah, Isaac and Rebecca, and Jacob and Leah are buried.

I later learned that the Rebbe urged my father to declare before the UN that Hebron belongs to the Jewish people without question – after all, Abraham purchased it for 400 silver coins, as the Torah testifies. My father responded that the Palestinians could then simply offer to return this sum. But the Rebbe countered: If that happens, we could demand the interest which has now accrued for thousands of years. Faced with such a prospect, they would surely give up their claim.

(Subsequently, my father submitted into the UN record the Torah chapter which describes Abraham purchasing that particular cave from the Hittites. His action was praised by many rabbis including the Rebbe, who wrote a letter to my father congratulating him.)

During an intermission in the dancing with the Torah that followed, the Rebbe delivered a short speech, which I vividly recall. He spoke about the important role that members of the Israeli army fulfill in serving as G-d’s vehicle for protecting the Jewish people, and he honored all those who had any connection to the Israeli army with the next dance.

There were many participants in that hakafah, including my father and the other diplomats, so the organizer gave me, the youngest member of the group, the Rebbe’s Torah scroll, which was small in comparison to the others. I recall that it was covered in white and I was extremely excited to carry it. As I did, everybody came up to me to kiss this special Torah.

At my father’s request, the Rebbe gave me a blessing – in fact, he blessed me twice in the course of that evening. My father was not a man who showed a lot of emotion, but that day he was very moved. I believe that it was very important to him that his son – who bore his father’s name – should receive a blessing from the Rebbe.

All in all, it was an extraordinary experience and the memory of that Simchat Torah will remain with me for the rest of my life.

In conclusion, I would like to explain something that many people don’t understand about the State of Israel.

The citizens of Israel have a strong sense of tradition. They might resent the religious establishment as such, because it is an establishment that doesn’t know how to convey the beauty of Judaism and doesn’t know how to explain the uniqueness of its connection to Eretz Yisrael. But even so, the citizens of Israel have a huge respect for honest religious leaders who advocate and practice a way of life that attends to the needy, that is based in faith, and that expresses confidence in what this nation represents. The Rebbe was such a religious leader and this is why the Rebbe gained the admiration of the nation.

In his lifetime, the Rebbe was a source of strength to people who lived in fear, who remembered the Holocaust vividly, and who knew that at any moment the existence of Israel could be held in question.

The Rebbe was extremely influential in every sphere of Israel’s national life – among the Israeli public and the Israeli leadership. And Chabad of today continues to promulgate his vision, which is why it is admired by Israelis as the Rebbe was admired – because Chabad reflects the spirit of the Rebbe.