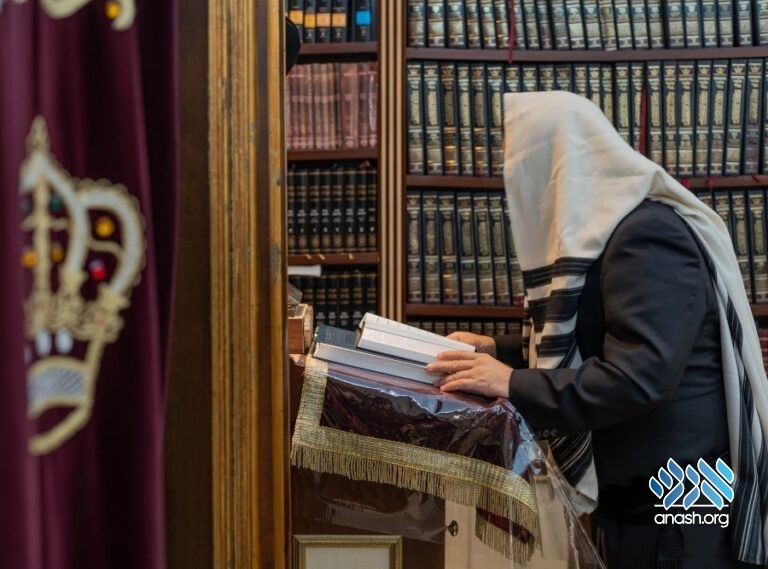 Motzei Shabbos Story: Shortly before Yom Kippur, Reb Leib Sarah’s arrived in a small town, and waited for a minyan to show up. But only eight others came, and told him that their only hope for a tenth man was the local poritz…

Torrents of rain beat down on his face, but the tempest did not prevent chassidic master Rabbi Leib Sarah’s from reaching the village. It was only several hours before the beginning of Yom Kippur. He was some distance from his intended destination, but he was relieved to learn that in this village, too, there would be a minyan (quorum of ten) with which to pray—eight local villagers would be joined by two men who lived in the nearby forest.

Rabbi Leib immersed himself, in preparation for the holy day, in the purifying waters of a river which ran by the village; ate the meal which precedes the fast; and hastened to be the first in the little wooden synagogue. There he settled down to recite the various private devotions with which he was accustomed to inaugurate the Day of Atonement.

One by one, the eight local villagers arrived in time to hear the words of Kol Nidrei. Together with Rabbi Leib, there were now nine. But there was no minyan, for it transpired that the two Jewish foresters had been imprisoned on some malicious libel.

“Perhaps we could find just one more Jew living around these parts?” asked Rabbi Leib.

“No,” the villagers all assured him, “there’s only us.”

“Perhaps,” he persisted, “there lives here some Jew who converted out of the faith of his fathers?”

The villagers were shocked to hear such an odd question from the stranger. They looked upon him quizzically.

“The doors of repentance are not locked even in the face of an apostate,” Rabbi Leib continued. “I have heard from my teachers that even when one pokes about in the ashes, one can light upon a spark of fire . . .”

One of the villagers now spoke up.

“There is one apostate here,” he ventured. “He is our paritz, the squire who owns this whole village. But he has been sunk in sin for forty years now. You see, the gentile daughter of the previous squire fell in love with him. So her father promised him that if he converted and married the girl, he would make him his sole heir. He didn’t withstand the temptation, so he did exactly that . . . They had no children, and his wife died many years ago; he now lives alone in his great big house. He is a cruel master, and deals especially harshly with the Jews on his land.”

He removed his tallit in a flash, and ran as fast as he could in the direction of the mansion, with his white skullcap on his head and his white kittel billowing in the wind. He knocked on the heavy door, opened it without waiting for a response, and found himself confronting the squire. For a few long, long moments they stood in silence face to face, the tzaddik and the apostate. The latter’s first thought was to summon one of his henchmen to seize the uninvited intruder and hurl him into the dungeon in the backyard. But the luminous countenance and the penetrating eyes of the tzaddik softened his heart.

“My name is Leib Sarah’s,” began the visitor. “It was my privilege to know Rabbi Israel, the Baal Shem Tov, who was admired also by the gentile noblemen. From his mouth I once heard that every Jew should utter the sort of prayer that was first said by King David: ‘Save me, O L‑rd, from blood-guilt.’ But the word used for ‘blood’ (damim) can also be translated as ‘money.’ So my teacher expounded the verse as follows: ‘Save me, so that I should never regard money as my L‑rd . . .’

“Now my mother, whose name was Sarah, was a holy woman. One day the son of one of the local gentry took it into his head to marry her, and promised her wealth and status if she would agree, but she sanctified the name of Israel. In order to save herself from that villain, she quickly got married to an old Jewish pauper who was a schoolteacher. You did not have the good fortune to withstand the test, and for silver and gold you were willing to betray your faith. Realize, though, that there is nothing that can stand in the way of repentance. Moreover, there are those who in one hour earn their portion in the World to Come. Now is that hour! Today is the eve of Yom Kippur. The sun will soon set. The Jews who live in your village are short one man to make up a minyan. Come along now with me, and be the tenth man. For the Torah tells us: ‘The tenth shall be holy unto G‑d.’”

The squire paled at the words spoken by this white-clothed man with the singular face. And meanwhile, down the road, the eight local villagers waited in shul, huddled together in frozen dread. Who could tell what calamity this odd stranger was about to bring down upon their heads?

The door burst open, and in rushed Rabbi Leib, followed closely by the paritz. The latter’s gaze was downcast, and his eyelashes were heavy with tears. At a sign from Rabbi Leib, one of the villagers handed the apostate a tallit. He enveloped himself in it, covering his head and face entirely. Rabbi Leib now stepped forward to the Holy Ark, and took out two scrolls of the Torah. One he gave to the oldest villager present, and the other—to the paritz. Between them at the bimah stood Rabbi Leib, and he began to solemnly chant the traditional tune for the opening lines of the Kol Nidrei prayer: “By the sanction of the Almighty, and by the sanction of the congregation, . . . we declare it permissible to pray together with those who have sinned . . .”

A deep sigh broke forth from the depths of the broken man’s heart. No man there could stand unmoved, and they all wept with him. Throughout all the prayers of the evening, and from dawn of the next day right until nightfall, the paritz stood in prayer, humbled and contrite. And as his sobs shook his whole body as he recited the confession, the other nine shuddered with him.

At the climax of the Ne’ilah service, when the congregation was about to utter together the words “Shema Yisrael,” the paritz leaned forward until his head was deep inside the Holy Ark, embraced the Torah scrolls that stood there, and in a mighty voice that petrified those present, cried out: “Hear, O Israel, the L‑rd our G‑d, the L‑rd is One!” He then stood up straight, and began to declare with all his might: “The L‑rd is G‑d!” With each repetition his voice grew louder. Finally, as he cried it out for the seventh time, his soul flew from his body.

That same night they brought the remains of the paritz to burial in the nearby town. Rabbi Leib himself took part in the purification and preparation of the body for burial, and for the rest of his life observed the yahrzeit of this penitent every Yom Kippur by saying kaddish for the elevation of his soul.