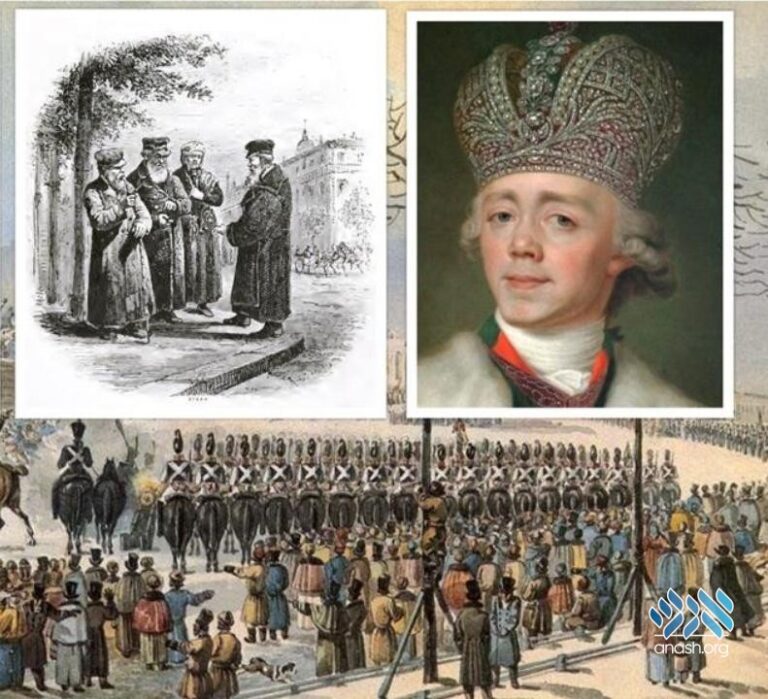 Motzei Shabbos Story: In addition to spreading Chassidus, the Alter Rebbe worked methodically and discreetly to protect and improve the welfare of Jews living in Russia, choosing 12 wise chassidim to lead these efforts.

In addition to disseminating Chassidic teachings, Rabbi Shneur Zalman of Liadi, the Alter Rebbe, founder of Chabad Chassidism, worked methodically and discreetly to protect and improve the welfare of Jews living in Russia. This began shortly after Catharine the Great took up her position in 1772, and Jews were granted citizenship rights. The Rebbe chose 12 wise and successful Chassidim to relocate to the capital city of Petersburg, where they were to establish contacts with various government officials in the course of their business dealings.

The purpose was twofold: to gather information about the government’s agenda, and to establish diplomatic avenues to help prevent or annul any new decrees that could harm the Jewish people. This group of 12 worked seamlessly together in a clandestine way. They would transmit information back to the Rebbe, who was in Liozna, and over the years quite a few evil decrees were subverted.

In 1794, following the conquest of Poland, Russia found itself with millions of additional Jewish denizens, and many agitated for new laws restricting Jews and their business activities.

The group got wind of these initiatives and with great effort they tried, unsuccessfully, to block them from getting to the interior minister.

The Empress agreed to have the complaints investigated and assigned her interior minister to commission a study investigating how the Jews lived throughout Russia, Poland, Ukraine, and Lithuania, and to see if there was any merit to the libelous claims against them. The author of the study would write up his conclusion and his recommendations would be implemented.

The minister instructed his deputy, Nikitin, who was known to be a corrupt and vile individual, to get the report underway. Nikitin commissioned the famous poet Gavrila Derzhavin, a notorious anti-Semite, whose opinions were highly regarded in the Czar’s circle. All this was cause for great concern.

Dovber Moshe of Disna, a member of the group, knew Derzhavin from his youth. And when Dovber Moshe moved to Petersburg, Derzhavin met him on the street, recognized him, and invited him to his home. During their many chats, the topic of Jew-hatred frequently came to the fore. Dovber Moshe would demonstrate how whichever claims were currently circulating regarding Jews were unfounded, and Derzhavin’s default answer was, “If only all your Jewish brothers were like you, I’d like them, or at least not hate them.”

This relationship made Dovber Moshe the obvious choice to meet with Derzhavin to convince him to carry out the study fairly and objectively. At the meeting, Derzhavin told Dovber Moshe that the Empress had instructed the interior minister to ensure that the study would be done by someone who would not sell out the motherland to those who hate her religion and that of her citizens. He should relegate the “wise nation” to jobs they deserve. “I intend to do my work impeccably,” Derzhavin concluded, “and you, my old friend, and all the Jews in Petersburg should start packing, as my first recommendation will be to expel all Jews from the capital.”

The Rebbe instructed the group to obtain Derzhavin’s itinerary and travel dates, and to continue working diligently to keep all avenues open. As for Derzhavin’s threat to expel the Jews from the capital, the Rebbe wrote on a piece of paper: “One who girds [the sword] shall not boast like one who ungirds [the sword], but the victory is the L‑rd’s.”

Dovber Moshe managed to obtain the requested information and relayed it to the Rebbe.

Shmarya Zalman of Polotzk, a silk merchant, and Nosson of Shklov, a diamond merchant, were nominated by the Rebbe to follow Derzhavin’s itinerary and establish contacts with local government officials and landowners along the way. They were to spare no effort obtaining any scrap of information about Derzhavin and his meetings and to document any impropriety.

The pair managed to obtain the information they sought, and compiled a detailed ledger with notes of meetings where hostile expressions were used, names and dates of those who were bribed, and more.

During Derzhavin’s trip, the Empress died and her son Paul took over. Paul was a good ruler who prioritized stability and surrounded himself with people of integrity. He made sweeping changes in his cabinet which was reflected in the mood on the street and the attitude towards Jews improved. The group remembered what the Rebbe had written on the piece of paper and they attributed the changes to that.

Meanwhile, the Rebbe gave the ledger that Shamrya Zalman and Nosson had compiled to Moshe Vilenker and Moshe Meizels. Their job was to organize the content, bring it to Petersburg, and together with the rest of the group find a way to get the ledger to the ministers who were friendly with the Jews.

When they arrived, they heard that Derzhavin was compiling his report. Taking no note of the changes that had taken place in the palace, Derzhavin submitted his scathing report. In his personal statement, he noted that he believed he had fulfilled his duties to the best of his abilities, just as the late Empress had instructed him.

Little did Derzhavin know that on Paul’s desk sat the ledger submitted by Moshe Meizels and Moshe Vilenker in advance of his own. The Czar thoroughly rebuked Derzhavin and then tossed the dossier into the fire, lifting the plight of the Jews.

Adapted from the diary of the Frierdiker Rebbe, Reshima #8 pp. 23-27.
Reprinted with permission from Chabad.org