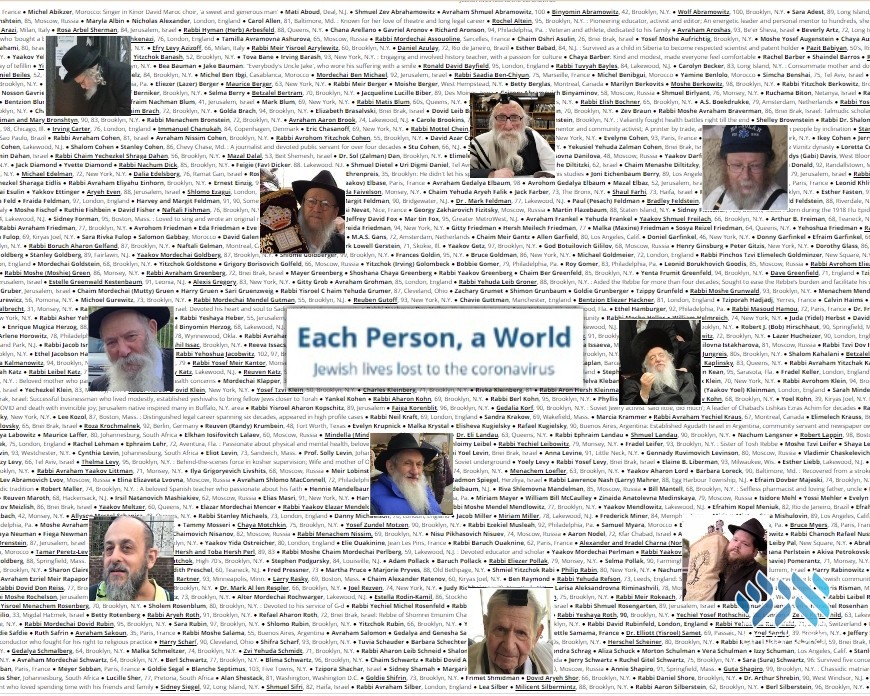 An ambitious project to memorialize every Jewish victim of COVID-19 has gathered 1,200 names from around the globe and is the largest Jewish project of its kind.

Reality dawned slowly, painfully. In mid-March, it suddenly became clear that the novel coronavirus that first ravaged China, and then parts of Europe, was becoming a global pandemic. Five months later, the death toll remains staggering.

On Aug. 20, Chabad.org published “Each Person, a World,” a memorial page paying tribute to the 1,200 Jewish victims of COVID-19 from around the globe, and includes links to obituaries of many. While there are undoubtedly unknown names missing from the list, the project is the largest Jewish one of its kind and will continue to be updated.

Back in March, as the joyous holiday of Purim approached, and synagogues and Jewish schools around the world made the decision to shut their doors, few could have imagined what the next weeks and months would look like.

But within days, it became clear that COVID-19’s toll would not just be the halt of communal prayer and gathering, nor the unprecedented and sudden school shutdowns. Something far worse loomed. As the first text messages and social-media posts requesting prayers for people infected with the virus made their rounds, the Jewish community braced itself for the unthinkable. And then it came.

“There was a feeling early on that this wasn’t just going to blow over, but then came this deluge of death within the worldwide Jewish community,” recalls Motti Seligson, director of media relations for Chabad.org. “When we started seeing message after message stating Baruch Dayan HaEmet [‘Blessed Are the True Judge,’ traditionally affirmed when receiving the news of a death], it was just overwhelming.”

Various segments of the Jewish community have been hit at different times—some earlier and some later, but none have been immune. Month after month, the death toll has mounted. Holocaust survivors, victims of Soviet oppression and war veterans, rabbis and laypeople, community leaders and teachers, Torah scholars and professionals, parents, grandparents and great-grandparents. Lost to an unseen enemy.

Of course, COVID-19’s deadly toll is a tragedy that has transcended religion, ethnicity and nationality, and the Jewish community joins with people around the world in mourning the loss of all life. Even now, months later, parts of the globe continue to battle the deadly virus, and the world continues to pray for an end to this plague.

From the beginning of the pandemic, the team at Chabad.org has worked hard to help individuals cope with loss, putting out numerous articles and videos on death and mourning. Among the initiatives has also been its Coronavirus Quarantine Kaddish Service, a special free service allowing anyone around the world without access to a minyan to input the name of a deceased loved one and have the Kaddish prayer said for them.

Yet Seligson still felt something had to be done to memorialize those who have passed. Each and every person lost to the COVID-19 plague represents a full life, a world unto itself. Especially as the numbers tragically grew, Seligson knew that every single name had to be recorded for posterity.

“This plague touches every part of the Jewish community without distinction,” says Seligson. “A Jewish memorial for the victims has to do the same. We are one people.”

And so even before Passover began, Chabad.org launched “Each Person, a World”—a project to document the name, age and some biographical information about every Jewish person who passed away from COVID-19. At the time, no one knew how big of an undertaking it would end up being.

In the months that followed, Chabad.org staff writer Mendel Super and media associate Tzali Reicher, both Australians who have been stranded Down Under since the beginning of the pandemic, liaised with Jewish community leaders around the world while scouring Jewish community news bulletins, papers and social-media postings to create the most comprehensive list of Jewish victims from the United States, France, Italy, Israel, Morocco and everywhere in between—about 1,200 names to date.

Super and Reicher also wrote hundreds of biographical sketches for those about whom information was accessible. This effort was joined by Chabad.org staff editors Menachem Posner and Dovid Margolin, who penned longer obituaries for figures as diverse as the former chief rabbi of Israel to the leader of an underground network aiding Soviet Jews. Other contributors include Eli Rubin, Mordechai Rubin, Motti Wilhelm and Aharon Loschak.

All those who have passed led lives that can and must be learned from. In the aftermath of any death within the Jewish community, the individual is mourned communally with friends, family and neighbors gathering to share memories of those lost. Due to social distancing and lockdowns, many of those who died during the pandemic were denied a regular funeral, a traditional shiva and even the recital of Kaddish.

The losses have hit the entire Jewish people, no matter which community, level of observance or socio-economic status, underlining the intrinsic unity of the Jewish nation. By publishing all of the names in this special section,Chabad.org hopes to give every one of the departed the honor and dignity they deserve, as well as allow readers to leave well-wishes and condolences.

“We are trying to be as comprehensive as possible,” explains Reicher. “But the goal is to get every single name down. No one should be forgotten.”

Ultimately, the most important element of memorializing a loved one wrote the Rebbe in a Hebrew letter to a family would be the way their offspring lived their lives. For they are “a living monument. Their deeds and behavior in their everyday lives … act as a living inscription on a living monument; the wording of this inscription is in their hands, and only theirs.”

May the memory of those who have passed be a blessing for the entire Jewish people and all humankind, and their stories a living legacy for all.

If you have lost someone dear to you, or know someone who has, we invite you to share their story here.