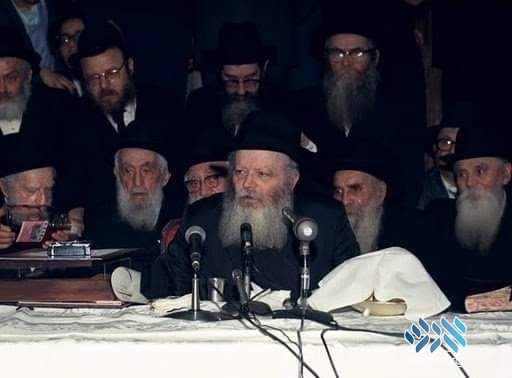 Audio from a historic moment at the Rebbe’s Farbrengen, was recently restored by the Ashreinu.app.

At the conclusion of the Farbrengen on the 6th Yahrtzeit of Rebbetzin Chana, on Vov Tishrei 5731, the Rebbe began speaking about a new breakthrough in technology, the ability for one’s words to be transmitted simultaneously to another country, referring to the Chassidim listening to the Farbrengen live in Eretz Yisroel.

In truth, the Rebbe explained, this ability always existed, as the Midrash says regarding the beginning of creation that Adam was able to gaze from one end of the world to the other. However, this was discovered only recently.

The Rebbe added “The time will probably come when just as they hear what is being spoken here, we will be able to hear when they respond “L’chaim V’Livrocho!”

As the Farbrengen continued, the Chassidim in Eretz Yisrael ran to bring Mashke, and in 770 a big speaker was brought from the WLCC room. The Rebbe was informed that the connection was made, and the singing in 770 stopped in anticipation. However, only silence was heard.

As time stretched on, the Rebbe instructed; “It is brought in Acharonim regarding a Shofar that is not blowing well, that one should say the Possuk “ויהי נועם” into it and it will blow. Say “ויהי נועם”, the entire Possuk!”

Someone standing in the crowd recited the Possuk aloud. Within moments, the speaker was brought to life, and the voice of Reb Foleh Kahn was heard announcing “L’chaim V’Livrocho!”

You can listen to the moment the connection was made https://ashreinu.page.link/LJ6X

To hear the full Farbrengen of Vov Tishrei 5731 click here.