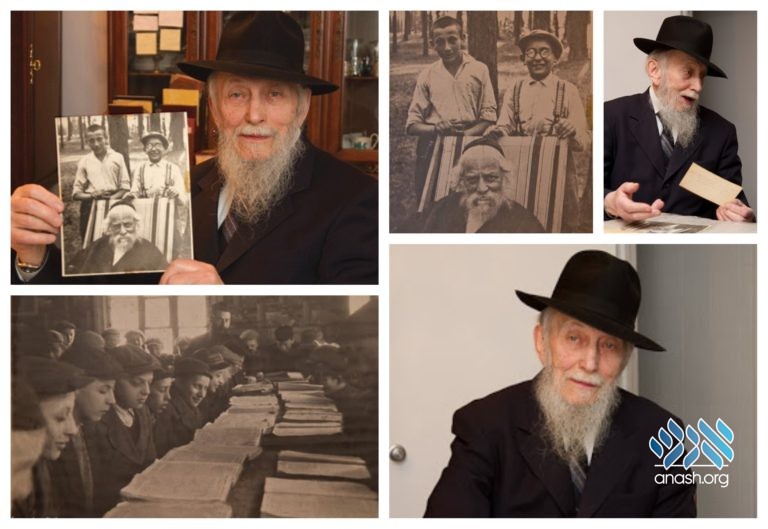 Born on 16 Elul, 5684/1924, in Suvalk, Poland, young Moshe Chaim never saw a chossid in his youth. Suvalk may have been in Poland at that time, but it was an old Litvishe town where Chassidus never managed to arrive.

When he was 14 years old, Moshe Chaim’s mother fell ill, and the doctor prescribed rest and relaxation in Druskenik, a spa town on the Nemunas River in southern Lithuania, near Vilna, close to the borders of Belarus and Poland. Its proximity to Vilna and Grodno meant that the great rabbonim and roshei yeshiva of that period, including Rav Baruch Ber Leibovitch of Kamenetz and Rav Chaim Ozer Grodzenski of Vilna and Rav Shimon Shkop of Grodno, among others would spend their summers there resting.

In Druskenik, young Moshe Chaim befriended a boy named Yehoshua, or Shaye, Leibovitch, who was Rav Boruch Ber’s eynikel. Being Shaye’s friend opened many doors for the “starstruck” child. One day, while sitting with Rav Boruch Ber, the rosh yeshiva asked him at which yeshiva he was learning. Moshe Chaim responded that he only just finished cheder in Suvalk and wasn’t sure what he was doing next. He was contemplating trying to go to the Lomzha yeshiva, as most boys in Suvalk were doing at that time.

Rav Boruch Ber spoke to the boy and told him to come to Kamenetz instead, to his yeshiva, and that he’d make sure he was taken care of properly, materially and spiritually. Moshe Chaim went and told his mother, who came to ask Rav Boruch Ber if what the child was saying is true. She too was assured by the rosh yeshiva that Moshe Chaim would be looked after and had nothing to fear.

Mrs. Sapochkinski wrote a letter home to her husband, who asked the rov in town, who said that Kamenetz was a “good” yeshiva and that it was OK for him to go there even if most Suvalker bochurim went to Lomzha. Soon, he was on his way to Kamenetz, where he joined the yeshiva ketana (see photo).

Moshe Chaim was to be forever famous when he “posed” for that picture with his friend Shaye and his zeide, Rav Boruch Ber. (see photo).

A year later, when the Nazis invaded Poland, Moshe Chaim fled to Vilna, which was then part of an independent Lithuania. There he met his rosh yeshiva, Rav Boruch Ber, who passed away soon after, in Kislev of 5700/1939. Moshe Chaim joined the Lubavitcher yeshiva there, and joined them on their long trip to Kobe, Japan, and then, Shanghai, China, where they stayed for the duration of the war.

In 5706/1946, he finally arrived in New York. There he was zoche to see the Frierdiker Rebbe and become his chossid. Three years later he was sent to Montreal to serve as shochet there.

A few years later he was appointed the rov of the Nusach Ari shul in Montreal, a position he held for 60 years. His eyniklach serve as shluchim all over the world.

Before his passing he wrote down his memoirs in a book entitled “Zichronosai.”