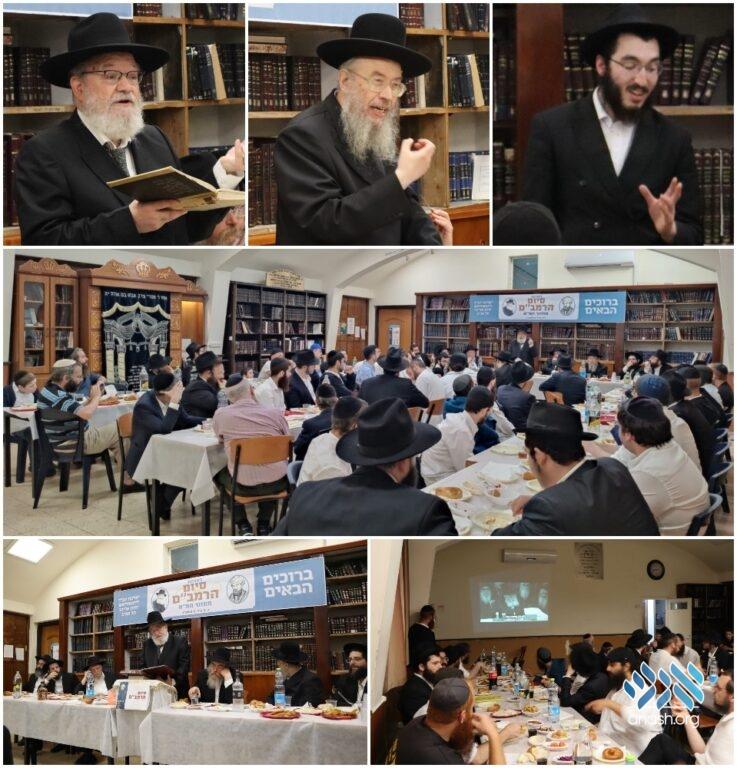 A grand Siyum Harambam was celebrated in the Chabad Yeshiva of Tel Aviv this past week, marking the completion of the forty-first cycle according to the takana of the Rebbe.

A grand Siyum Harambam was celebrated in Tel Aviv this past week, marking the completion of the forty-first cycle and the beginning of the forty-second, according to the takana of the Rebbe.

The evening was held in the Chabad Yeshiva – Chazon Eliyahu, and was arranged by the Talmidim Hashluchim.

The Siyum, replete with a full Seuda, opened with a video of the Rebbe from the farbrengen of Lag B’omer 5745, where the Rebbe spoke about the merits of learning Rambam and the importance of celebrating the Siyum.

The program was emceed by Yitzchak Dubov of the Talmidim Hashluchim, who spoke about the history of Takanas Harambam.

Rabbi Yosef Gerlitzki, Shliach to Tel Aviv and Rav of the Chabad community in Tel Aviv, was honored with making the Siyum. Rabbi Gerlitzki spoke about the importance of learning Chassidus, as can be seen in various halachos in Rambam. As well, he shared various answers and directives from the Rebbe pertaining to the Siyumei Rambam that were held in Tel Aviv.

The Haschala and main address of the night were delivered by Rabbi Yaakov Goldshmid, Rosh Yeshiva in the Central Yeshiva of Kfar Chabad. Rabbi Goldshmid shared an explanation of the Rebbe on the first two halachos of Rambam, which he merited to hear as a bochur in 770 in 5749, and also told over his memories of the Siyum Harambam of that year.

Rabbi Moshe Pinchas Zander, Rov of the Gerrer Chassidim in Tel Aviv, and longtime friend of the Chabad community, explained that learning Rambam is, in addition to Limud Hatorah, also a fulfillment of the mitzvah to listen to the words of the Chachamim, when we follow the Rebbe’s directive. He then demonstrated how the exact wording of the Rambam can infer practical halachic implications, and shared an example pertaining to the proper time to wait between meat and milk. He finished by praising the work of Chabad and the Yeshiva specifically, in bringing Yiddishkeit to every Jew.

The Rosh Yeshiva Rabbi Meir Aryeh Shmerling encouraged the bochurim to strengthen and improve their learning of Rambam, and especially in preparation for Shavuos.

A special Teshurah was distributed to all assembled, containing a collection of Sichos and Answers of the Rebbe connected to Rambam.

Ending off, the organizers thanked all those involved in the event and especially Rabbi Levi Wolf, Menahel Gashmi of the Yeshiva.

Following the official program, a Farbrengen with Rabbi Gerlitzki and the Hanhala ensued, continuing into the late hours of the night.

The beautiful event left a strong impression on the large crowd who attended, fulfilling the Rebbe’s call of Siyum Harambam.