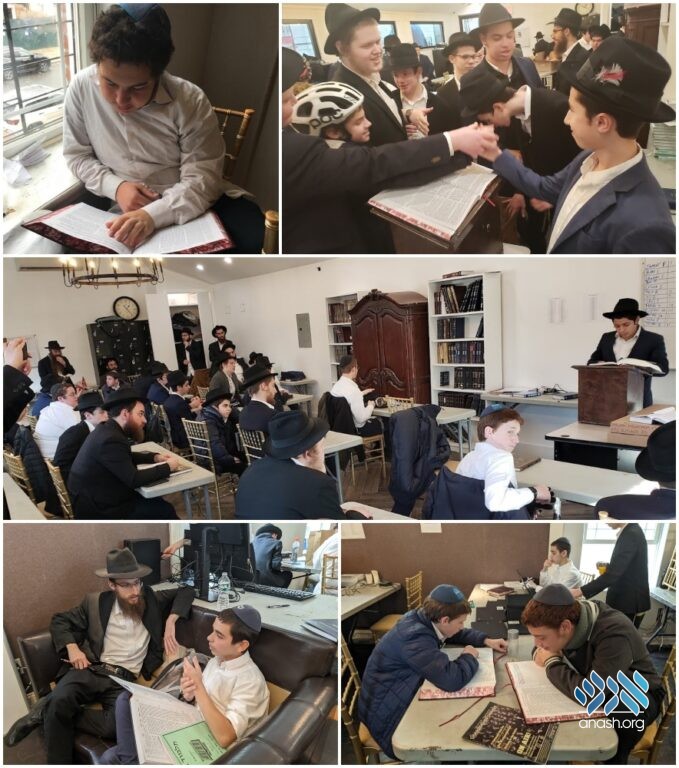 A challenge by a teacher led 75% of the Darchei Menachem student body to commit to finishing a full mesechta, and many of them have already completed their study.

If you met him now, you would think he has attended a Jewish school since childhood. Yet, in truth, Yisroel Eben Ezra only began attending Mesivta Darchai Menachem three years ago. And now, thanks to the grassroots initiative recently launched by Darchai’s staff, Yisroel has achieved a tremendous milestone. He recently made his first-ever Siyum Meseches Gemara and has begun his second Mesechta.

Yisroel was born and raised far away from the enclave of Crown Heights. He grew up in the Dominican Republic, in a somewhat secular environment. But as he was entering his teenage years, Yisroel’s family befriended Rabbi Shimon and Michal Pelman, the Shluchim in the Dominican Republic. With the Pelman’s guidance, the Eben Ezras began to further engage themselves in a Torah-observant lifestyle.

As their journey progressed, Itai, Yisroel’s father, looked for a Jewish school to educate his son. As he explored different options, some business contacts in Crown Heights introduced him to Darchai Menachem. Mid-school year, Itai flew down to New York for an interview with the school administration. He was thoroughly impressed with what he saw; he beheld an accepting, easygoing, and loving environment, with teachers committed to educating each child according to their independent needs and qualities. Even though Darchai Menachem was filled to its capacity, they accommodated the Eben Ezras, and Yisroel joined their Mesivta program.

Yisroel thrived in his new school climate. Although he did not have the same cultural or academic background as his peers, he quickly made new friends, learned Loshon Hakodesh, and mastered the basics of Jewish life. Before long, Yisroel was on par with the rest of his class. The Eben Ezras accredit this exponential growth to the individualized learning that Darchai Menachem offers through its customizable curriculum and inviting class setting.

During this time, Yisroel and his family, his father, mother, and two sisters moved to Crown Heights to live in a Jewish community. “Yisroel has been attracted to Jewish life from a very young age,” says Itai. “He would wear a kippah and tzitzit in public, but he didn’t know very much. Yet now, three years later, he is a regular Yeshiva boy. I don’t think he comprehends how much Darchai has done for him.”

This is not just Yisroel’s story. This is also a story of Darchai Menachem’s impact on its student body. Yisroel’s incredible growth, personally and academically, is among the many success stories within Darchai’s walls.

Last year, a few bochurim began to learn a meseches Gemara in their own time, an exclusive few. However, two months ago, during the week of Yud Tes Kislev, Rabbi Mendy Oster, a teacher in Mesivta Darchai Menachem, promoted an initiative; he encouraged all 36 Mesivta bochurim to make a siyum on a mesechta. Initially, it sounded outlandish, almost impossible. Yet, 27 talmidim took on the challenge to complete one or multiple mesechtas, 75% of the Mesivta student body! Presently, 16 talmidim have already made a siyum since the beginning of the year. Boys who may have once viewed themselves as non-academically inclined are now self-motivated to study during breaks and after-school hours.

Talmidim have commented that they have never felt so empowered and confident in their academic capabilities and spiritual growth. At Mesivta Darchai Menachem, there is an electrifying Torah energy in the air!

“We would like to wish a tremendous mazal tov to all our Mesivta Bochurim who have completed their Mesechta,” says Rabbi Dovid Marozov, Darchai Mesivta Menahel. “We are also immensely proud of every bochur who is working towards their personal goal. These efforts are a testimony to the Darchai vision; with patience and persistence, talmidim will do well, because they can.”