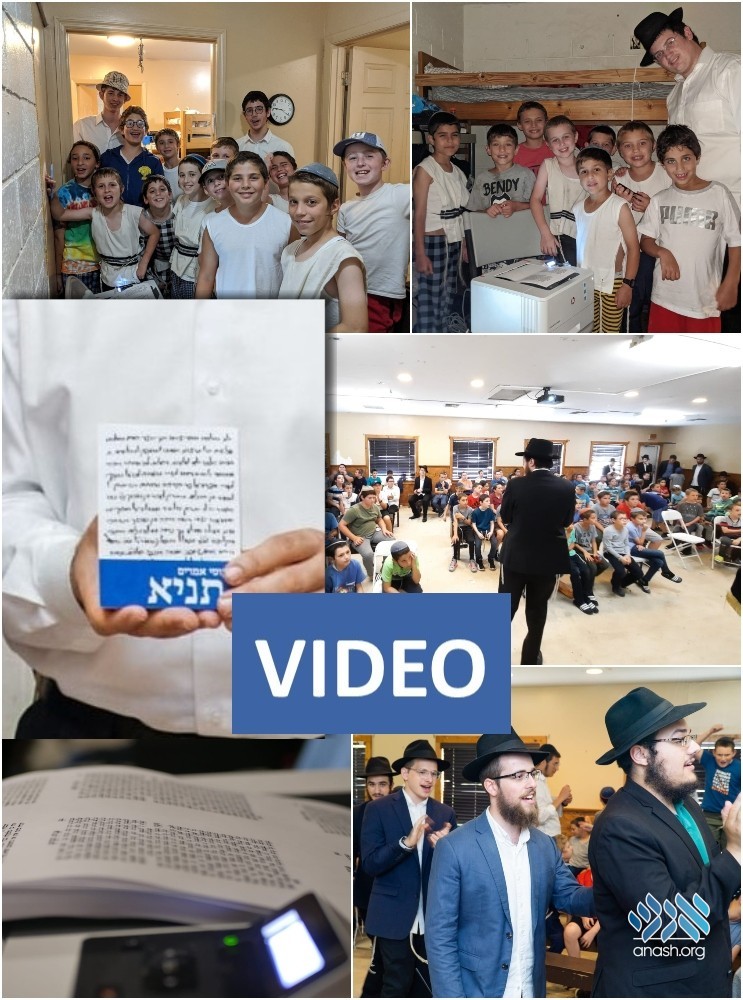 A special edition of the Tanya was printed in CGI Florida this summer, with portions of the printing taking place in every building on camp grounds.

It’s not often that one gets to participate in the printing of a Tanya. It’s less often one gets to see the project through from beginning to end.

Well, count the campers of CGI Florida as one of the lucky ones!

On Yud Gimmel Tammuz, Chag HaGeulah of the Frierdiker Rebbe, campers and staff gathered for camp’s second-ever printing of the Tanya (and first-ever in their current grounds.)

Learning Director Shmuly Cunin gave background to the Rebbe’s campaign to print the Tanya in every part of the world. Staff mashpia Rabbi Levi Geenbaum taught the campers the first few lines of Perek Lamed Beis followed by everyone reading them together.

Camp Director Rabbi Yossi Goldblatt was honored with printing the Sha’ar Blatt, as everyone joined in singing the Alter Rebbe’s Niggun of “Keli Ata”, followed by the niggun “Eimosai Ko Asi Mar”.

In the following weeks parts of the Tanya were printed in every major building in camp, including bunkhouse in the presence of its campers.

On Chof Menachem-Av, yartzeit of the Rebbe’s father, Rabbi Goldblatt and Camp Chef Nissen Pewsner were each gifted a bound copy. Campers and staff each received theirs later that evening. Efforts were made to includes the names of each camper and staff (and when possible, the names of their mothers) in the back of the Tanya.

A tremendous Hakoras HaTov goes to camp’s Executive Director Rabbi Yossi Biston for his support and assistance throughout the project, facilitating the Tanyas completion in such timely fashion.

A special thank you to all those who have contributed and assisted in the Tanya’s printing: Rabbis Sholom and Shmuel Jacobson; The Abraham, Greenman, Hackner & Unsdorfer families; Mr. Amir Ben-Ishay, Levi Parnas, Shmuly Gordon, Memkeh Schmukler and the entire staff and campers of CGI Florida 5780.

May the Tanyas printing be the last effort needed in the spreading of the Ba’al Shem Tov’s teachings to bring about the coming of Moshiach and the Geulah Sheleima, now!