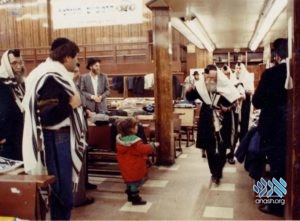 On the 10th of Shevat (January 28), 1950, the Rebbe Rayatz passed away. Reb Mottel Scharfstein and his brother Rabbi Zelig were at their parents’ house on the Lower East Side when they got the news. Broken, they went straight to 770. “When we got to 770 everybody was in a very sad mood,” he recalled. “I went upstairs to say Tehillim by the Rebbe’s body, but people said, ‘If you didn’t go to the mikvah, you can’t enter into the room.’ I immediately ran to the mikvah on Union Street, but there were women there. Thus I didn’t get to go into the room where the Rebbe was lying on the floor. So I said Tehillim in the hallway.”

Exactly one year later, the Rebbe officially accepted leadership of Chabad, and Mottel—like all of the students of Lubavitcher Yeshivah—was called in for a yechidus.

The Rebbe advised him to increase his studying gemarah and Chassidus.

When he was about to leave, the Rebbe asked him, “And what about a shidduch?”

Mottel told the Rebbe, “You know that the Chazal say ‘kasha lizaveg zivugim k’kriyas yam suf’” (To make a match is as difficult as splitting the Red Sea).

“At that time I still had the nerve to say that,” Mottel later said. “The Rebbe was startled. He didn’t expect me to say that.”

The Rebbe responded, “Uber fundestveggen” (Even so [you should try]).

Later in a yechidus with the Rebbe in honor of his birthday, the Rebbe suggested that he should repeat a maamar. Mottel was visibly reluctant, so the Rebbe told him a story:

The Rebbe Maharash, once asked Reb Yaakov Mordechai Poltava, who had difficulty speaking, to publicly review a maamar. Since the Rebbe asked him, he could not refuse. He would first review the maamar for the trees in the forest; then he would review it for the benches in shul; and only then would he review it publicly.

“The Rebbe sort of hinted that I should do the same thing,” Mottel said. So he went to shul to review a mammar to the benches, but someone was there, so he never got a chance to do it. “I finally did review the maamar, and everyone said that I did a good job,” he recalled.